Charlotte, Princess Royal (Charlotte Augusta Matilda; 29 September 1766 – 5 October 1828), was Queen of Württemberg as the wife of King Frederick. She was the 1st daughter and 4th child of King George III of the United Kingdom. 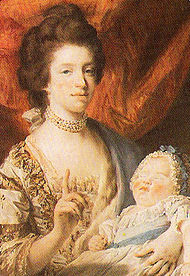 The infant Princess Royal with her mother, Queen Charlotte. Painting by Francis Cotes, 1767. Currently displayed in the Royal Collection.

Princess Charlotte was born on 29 September 1766 at Buckingham House, London, to British monarch, King George III and Charlotte of Mecklenburg-Strelitz. She was christened on 27 October 1766 at St James's Palace, by the Archbishop of Canterbury, Thomas Secker, and her godparents were her paternal uncle and aunt, King Christian VII of Denmark and his wife, Caroline Matilda of Great Britain (for whom the Duke of Portland, Lord Chamberlain, and the Dowager Countess of Effingham, stood proxy, respectively) and her paternal aunt, Princess Louisa.[1]

On 18 January 1782, she appeared at her first Court Ball. A drawing room was held to celebrate the Queen’s birthday and the ball that followed was opened soon after nine o’clock by the Princess Royal dancing the first minuet with her brother, the Prince of Wales.[2] Charlotte was officially designated as Princess Royal on 22 June 1789.

After the birth of three sons in a row, her parents were delighted to have a Princess in the nursery. Like all of her siblings, Charlotte was inoculated—in her case, in December 1768 along with her brother William. As the eldest daughter of the monarch, Charlotte was assumed to be destined for an important marriage on the continent, and her education was considered to be of the utmost importance, beginning when she was only eighteen months old. Since French was the official language in every European court, the little Princess was given a Frenchwoman to be her tutor, in order that she should have no accent. Her memory was another of her beginning subjects. She was taught to recite little verses and stories, and as a result had an almost uncanny ability to recall detail for the rest of her life. Her early childhood was not all scholarly pursuits. When she was almost three years old, she took place in her first tableau dressed like Columbine, where she danced with her seven-year-old brother George, Prince of Wales. She was not a naturally musical child and later abhorred such displays of children, declaring that they made children vain and self-important. This did not stop her parents from continuing to show her off. In late 1769, she and the Prince of Wales were once again displayed, this time to the public in a "junior drawing room" in St. James' Palace. Charlotte was dressed in a Roman toga and lay on a sofa. Though this type of thing was common in German courts, it was considered vulgar in England, where in reaction a London mob drove a hearse into the Palace courtyard. Afterward, the Prince of Wales told Lady Mary Coke that the whole event had made Charlotte "terribly tired." Wisely, the King and Queen decided to never repeat the experience. 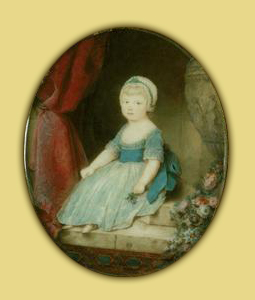 The Princess Royal in 1769. Miniature by Ozias Humphry, Windsor Castle.

Though she was the eldest daughter, Charlotte was constantly compared to her sister Augusta Sophia, only two years younger than she. When Augusta was a month old, Lady Mary Coke called her "the most beautiful baby I have ever seen" while Charlotte was "very plain". Passing judgment once again three years later, Charlotte was now "the most sensible agreeable child I ever saw, but in my opinion far from pretty" while Augusta was still "rather pretty". Although the Princess Royal was never as beautiful as her younger sister, she did not share in Augusta's primary flaw: painful shyness, though Charlotte did suffer from a stammer that her attendant Mary Dacres tried to help her young charge overcome. In 1770, the cluster of the three eldest princesses was completed with the birth of Princess Elizabeth, the seventh child. For the time being the family remained comparatively small (there were fifteen royal children in all), and Charlotte was fortunate in having parents who preferred spending time with their numerous children to spending all their time at court and took her education seriously. However, given the frequency with which children were being produced and the troubles that plagued George III's reign, Charlotte's childhood was not as utopian as her parents planned it to be.[3]

Like her siblings, the Princess Royal was educated by tutors and spent most her childhood at Buckingham Palace, Kew Palace, and Windsor Castle, where her wet nurse was Frances wife of James Muttlebury.[4] 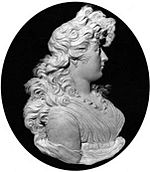 Charlotte was very keen to be married and asked her brother, the Prince of Wales, to find her a husband. The King was absolutely set against his daughters marrying either a Catholic or a commoner, which left very few eligible persons. The widower Duke-Regent Peter of Oldenburg was touted as a possibility, and her sisters even teased her by referring to her as “the Duchess of Oldenburg” but nothing came of it.[2]

In 1796, Prince Frederick William, the Hereditary Prince of Württemberg (eldest son and heir apparent of Duke Frederick II Eugene of Württemberg and his wife, Margravine Sophia Dorothea of Brandenburg-Schwedt) made Charlotte an offer of marriage. The King was very reluctant to give his consent. Firstly, Prince Frederick's father was a Catholic and secondly, his first wife Princess Augusta —daughter of Duke Karl II of Brunswick-Wolfenbüttel and Princess Augusta of Great Britain (the elder sister of George III) and also the elder sister of Caroline of Brunswick, the estranged wife of the Prince of Wales— had died in suspicious circumstances in Russia.

However, Charlotte was set on the match and succeeded in gaining her father’s consent. The couple met on 15 April 1797 and they were married on 18 May in the Chapel Royal at St. James's Palace, London by the Archbishop of Canterbury. Charlotte wore a dress of white and gold made by her mother, with a scarlet mantle and a crimson velvet coronet with a broad band and a large plume of diamonds. She wore the Order of St Catherine on her breast.

The Queen immediately held a drawing room so that people could pay their respects to the royal couple and on 23 May, she gave a grand fete at Frogmore in honour of their marriage. On 2 June, the couple left for Stuttgart.[2]

The younger Frederick succeeded his father as the reigning Duke of Württemberg on 22 December 1797. Charlotte enjoyed her new freedom and status and spent her time reading, especially religious and historical works, writing letters and drawing. In the Palace at Stuttgart, there were cabinets which demonstrated Charlotte’s taste and skill in enamel painting.[2]

Frederick William was impetuous and violent but loved justice, and Charlotte seems to have been genuinely attached to him. Sadly, their marriage only produced a stillborn daughter on 27 April 1798, but Charlotte was much loved by Frederick’s children from his first marriage.

In 1800, the French army occupied Württemberg and the Duke and Duchess fled to Vienna. The following year, Duke Frederick concluded a private treaty ceding Montbeliard to France and receiving Ellwangen in exchange two years later. He assumed the title Elector of Württemberg on 25 February 1803. In exchange for providing France with a large auxiliary force, Napoleon recognized the Elector as King of Württemberg on 26 December 1805. Electress Charlotte became queen when her husband formally ascended the throne on 1 January 1806 and was crowned as such on the same day at Stuttgart, Germany. Württemberg seceded from the Holy Roman Empire and joined Napoleon's short-lived Confederation of the Rhine. However, the newly elevated king's alliance with France technically made him the enemy of his father-in-law, George III. George III, incensed by his son-in-law's assumption of the title and his role of one of Napoleon's most devoted vassals, accordingly refused to address his daughter as "Queen of Württemberg" in correspondence. In 1813, King Frederick changed sides and went over the Allies, where his status as the brother-in-law of the Prince Regent (later George IV) helped his standing. After the fall of Napoleon, he attended the Congress of Vienna and was confirmed as king. He died in October 1816.

The Dowager Queen of Württemberg continued to live at the Ludwigsburg Palace, Stuttgart but visited Deinach in the Black Forest every summer, a place which was renowned for its mineral waters.[2] She also received visits from her younger siblings, the Duke of Kent, the Duke of Sussex, the Duke of Cambridge, the Landgravine of Hesse-Homburg, and Princess Augusta Sophia. She was a godmother (by proxy) at the christening of her niece, Princess Victoria of Kent (the future Queen Victoria), in 1819.

In 1827, she returned to Britain for the first time since her wedding in 1797 in order to have surgery for dropsy. On her return journey to Württemberg , her ship was caught in a storm, but she remained calm, saying:

She died at Ludwigsburg Palace the following year of an apoplectic seizure, and was buried next to her husband on 12 October in the royal vault.[2] 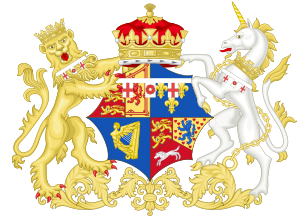 The coat of arms of Princess Charlotte

As a daughter of the sovereign, Charlotte had use of the arms of the kingdom, differenced by a label argent of three points, the centre point bearing a rose gules, the outer points each bearing a cross gules.[6]