South Glengarry is a township in eastern Ontario, Canada on the Saint Lawrence River in the United Counties of Stormont, Dundas and Glengarry.

The township was created on 1 January 1998, by amalgamating the townships of Charlottenburgh and Lancaster with the independent village of Lancaster.

Charlottenburgh and Lancaster were two of the original eight "Royal Townships", established along the Saint Lawrence River in Upper Canada in the 1780s. This area was first settled by United Empire Loyalists. The development of this area was encouraged by Sir John Johnson, then the Superintendent General and Inspector General of Indian Affairs, who had been forced to abandon his land holdings in New York State during the American Revolution.[2]

From the late 18th century to the early 19th century, the area was almost entirely settled by Scottish highlanders, especially from Inverness-shire, after the Highland Clearances. Canadian Gaelic / Scottish Gaelic had been spoken in Glengarry County since its first settlement in 1784.

Johnson built a house in Williamstown near the end of the 18th century, The Manor House, which is now a Canadian National Historic Site. A grist mill and saw mill, now gone, were also built on the same location. Williamstown also contains the oldest log house in Ontario which was built in 1784. Occupants over the years have included the Reverend John Bethune (1751–1815), the great-great-grandfather of Doctor Norman Bethune, and David Thompson, Canadian explorer.

Some of the main partners of the North West Company, including Hugh McGillis, lived in this area. 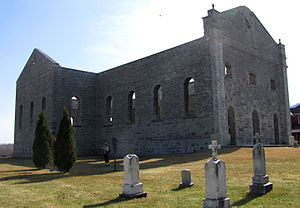 Alexander McMartin, the first person born in Upper Canada to serve in the Legislative Assembly, was from Martintown.

The Glengarry Celtic Music Hall of Fame is located in Williamstown.

Williamstown is also home to Canada's oldest continuing annual fair, which celebrated its bicentennial in 2012. It is also quite possibly North America's oldest annual fair although this distinction has yet to be authenticated.

The Nor'Westers and Loyalist Museum is also located in Williamstown.

South Glengarry is the location of four National Historic Sites of Canada: the Bethune-Thompson House,[3] the Glengarry Cairn,[4] the Sir John Johnson House,[5] and the ruins of St. Raphael's Roman Catholic Church.[6]

St. Raphael's Catholic Church was built commencing 1821 under the authority of Alexander Macdonell later Bishop of Regiopolis (now Kingston, Ontario). This is one of the oldest churches in what was then the colony of Upper Canada. In late 1970, the church interiors, roof and tower were destroyed by fire, but the ruins were preserved. In 1973, a smaller church with the same name was built, attached to the ruins .

The Char-Lan Rebels of the Eastern Ontario Junior B Hockey League play out of the Char-Lan Recreation Centre in Williamstown.

Sir John Johnson, one of the original landowners and developers of the area. Constructed The Manor House in Williamstown, now a Canadian National Historic Site.

Ran McDonald, hockey player, born in Cashion's Glen and played in the PCHA reaching the height of his career in the 1919 Stanley Cup Finals.

Alexander McMartin, from Martintown; first person born in Upper Canada to serve in the Legislative Assembly.

Canadian author Hugh Hood mentions Williamstown in his short story "Getting to Williamstown," first published in 1928.