Chaturmas is reserved for penance, austerities, fasting, bathing in holy rivers and religious observances for all. Devotees resolve to observe some form of vow, be it of silence or abstaining from a favourite food item, or having only a single meal in a day.

The sun enters the zodiacal sign of Karka (Cancer) and begins to move southwards in the month of Ashadh.

The eleventh day of Ashadh is called Devashayani Ekadashi, because in Hinduism, Lord Vishnu is believed to begin to sleep on this day. He is believed to wake up on the eleventh of Kartik, hence called Prabodhini Ekadashi.[3] The period corresponds with the rainy season in India.[4]

It is believed that Hindu gods and goddesses are at rest during this period and should not be disturbed, so no auspicious ceremonies, such as weddings and thread ceremonies, are held during the four months' period.[5][6]

Chaturmas, inauspicious for weddings and other celebrations,[4] is a suitable time for householders to have an annual renewal of faith by listening to discourses on dharma, and by meditation and vrata (self-control). Penance, austerities, religious observances, recital of mantras, bathing in holy rivers, performing sacrifices, and charity are prescribed. Fasts and purity during this period help maintain health,[3] for which there is likely a scientific rationale, disease spreading more readily with the onset of monsoon.[citation needed]

A number of Hindus, particularly those following the Vaishnav tradition, refrain from eating onions and garlic during this period. In Maharashtra, a number of Hindu families also do not eat any egg plant (Brinjal / Aubergene) preparations. 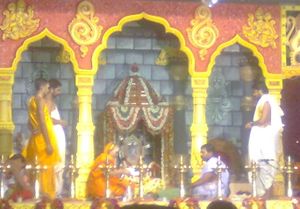 A Sansyasi performing Vyasa puja as a part of Chaturmas rituals

Major Celebrations within this holy period include:

In Jainism this practice is collectively known as Varshayog and is prescribed for Jain monasticism.[8] Wandering monks such as mendicants and ascetics in Jainism, believed that during the rain season, countless bugs, insects and tiny creatures that cannot be seen in the naked eye would be produced massively. Therefore, these monks reduce the amount of harm they do to other creatures so they opt to stay in a village for the four months to incur minimal harm to other lives. These monks, who generally do not stay in one place for long, observe their annual 'Rains Retreat' during this period, by living in one place during the entire period amidst lay people, observing a vow of silence (mauna), meditation, fasting and other austerities, and also giving religious discourses to the local public.

During the four-month rainy-season period, when the mendicants must stay in one place, the chief sadhu of every group gives a daily sermon (pravacana, vyakhyana), attended mostly by women and older, retired men, but on special days by most of the lay congregation. During their eight months of travel, the sadhus give sermons whenever requested, most often when they come to a new village or town in their travels.[9]

One of the most important Jain festivals, Paryushana, falls during this period, which concludes with Forgiveness Day, Kshamavani Diwas, wherein lay people and disciples say Micchami Dukkadam and ask forgiveness from each other.[10] Amongst Jain merchants, there is a tradition of inviting monks to their respective cities during Chaturmas to give religious instruction.[11]

In Jainism, the third part of the classical Jain text Kalpa Sutra, written by Bhadrabahu I in the 1st century AD, deals with rules for ascetics and laws during the four months (chaturmas) of the rainy season, when ascetics temporarily abandon their wandering life and settle down amidst the laity. This is the time when the festival of Paryushan is celebrated and the Kalpasutra is traditionally recited.

Gautama Buddha stayed at the royal garden of King Bimbisara of Rajgir, whom he had recently converted, for the period of Chaturmas and gave sermons: this practice is followed by monks to this day. Another reason for ascetics to stay in one place during the rainy season is that the tropical climate produces a large number of insects, which would be trampled by travelling monks.[12]