Prior to 1958, chief petty officer was the highest enlisted rank in both the U.S. Navy and U.S. Coast Guard. This changed on 20 May 1958 with the passage Public Law 85-422, the Military Pay Act of 1958, which established two new pay grades of E-8 and E-9 in all five branches of the U.S. Armed Forces. In the U.S. Navy and U.S. Coast Guard, the new E-8 pay grade was titled Senior Chief Petty Officer (SCPO) and the new E-9 pay grade as Master Chief Petty Officer (MCPO),[3] with the first selectees promoting to their respective grades in 1959 and 1960.

Prior to establishment of the E-8 and E-9 grades, Chief Petty Officers could typically serve in uniform for 30 or more years.

Shortly following establishment of the E-8 and E-9 grades, service limits currently known as High Year Tenure (HYT) were established by pay grade. Although these limits periodically flex based on Fleet manpower requirements, current HYT limits restrict Chief Petty Officers not selected for promotion to Senior Chief Petty Officer to 24 years of service, after which they face mandatory retirement. 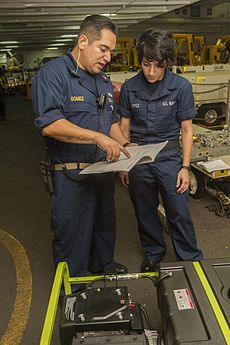 A chief petty officer gives instructions to a seaman aboard an aircraft carrier in 2013.

Each rating has an official abbreviation, such as QM for quartermaster, BM for boatswain's mate, or FC for fire controlman. When combined with the petty officer level, this gives the shorthand for the chief's rate, such as BMC for Chief Boatswain's Mate. It is not uncommon practice to refer to the chief by this shorthand in all but the most formal correspondence (such as printing and inscription on awards). Usually Chief Petty Officers are referred to as "chief", regardless of their rating.

The United States Navy and the United States Coast Guard are distinct among the U.S. Armed Forces in that promotion to the paygrade of E-7 traditionally has involved a season of specialized activities known collectively as "initiation", "orientation","induction" or most recently, "CPO 365 Phase II". The "induction season", as it was called, has been replaced by a program called CPO 365, a year-round program for first class petty officers. On January 7, 2013, the Master Chief Petty Officer of the Navy, Michael D. Stevens, announced:

Effective immediately, we're respectfully sun-downing the word 'induction', and in its place we'll use CPO 365 as the primary term," said Stevens. "I believe that induction is more about a moment in time, and CPO 365 and the development of our FCPOs to become CPOs is not about a moment in time. It's about a continuous time. This is something we're going to do every day, 365 days a year, and so we want to make sure the term we are using is matching what we are doing.

Advancement into the chief petty officer grades is the most significant promotion within the enlisted naval rates. At the rate of chief petty officer, the sailor takes on more administrative duties. In the U.S. Navy, their uniform changes to reflect this change of duty, becoming identical to that of an officer's uniform except with different insignia. Personnel in the three chief petty officer rates also have conspicuous privileges such as separate dining and living areas. Any naval vessel of sufficient size has a room or rooms that are off-limits to anyone not a chief (including commissioned officers), except by specific invitation. In naval jargon, this room is called the Chief's Mess, or tongue in cheek, the "goat locker". In addition, a chief petty officer, is usually addressed by either their rate or as "chief" by both subordinates and superiors upon advancement to the rate.

In naval terminology, the deckplate can roughly refer to the deck ("flooring"), or the area of the deck of a ship or boat (submarine). It can also refer to the Division Officer and chief petty officer leadership.[10] The term deckplate leaders is a colloquial term referring to the senior enlisted personnel of the rate of chief petty officer and higher. They are generally charged with keeping good order and discipline within the lower enlisted rates.

On the dress blue uniform (and variants such as mess whites), the insignia is worn on the left arm of the uniform blouse (or "suit coat" in civilian terminology). On all other uniforms, the insignia used is worn on the collar and has become universally accepted as the symbol of the chief petty officer, which is a fouled (entwined in the anchor chain) gold anchor superimposed with the letters "USN" in silver in the Navy, or a silver shield in the Coast Guard.

A U.S. Navy chief petty officer's rate emblem is symbolized by a fouled anchor with the letters "USN" centered on the anchor. Officially the letters stand for United States Navy. According to naval tradition, the letters are symbolic of the following:[11]