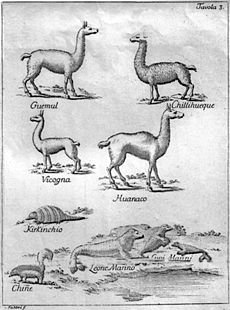 1776 illustration of various lamines, including the chilihueque in the top right.

Hueque or Chilihueque is a South American camelid variety or species that existed in central and south-central Chile in Pre-Hispanic and early colonial times. There are two main hypotheses on their status among South American camelids: the first one suggest that they are locally domesticated guanacos and the second that they are a variety of llamas brought from the north into south-central Chile.[1] The alpaca has also been suggested as a possible identity.[2] Chilihueques became extinct in the 16th or 17th century being replaced by European livestock.[1] The causes of its extinction are unknown.[1]

According to Juan Ignacio Molina, the Dutch captain Joris van Spilbergen observed the use of chilihueques by native Mapuches of Mocha Island as plough animals in 1614.[3]