As of December 2014, China Mobile (Chinese: 中国移动) is the world's largest mobile phone operator by subscribers with about 806 million.[9]

A state-owned enterprise directly controlled by the government of the People's Republic of China[6] and also a public company that is listed on the NYSE and the Hong Kong stock exchanges,[2] China Mobile has dominated Chinese mobile services since its inception. As of 2010, China Mobile controls the vast majority of its domestic mobile services market with a 70% market share.[10] China Unicom and China Telecom have 20% and 10% shares, respectively.[10]

Incorporated in 1997 as China Telecom (Hong Kong) Limited,[1] China Mobile was born from the 1999 break-up of China Telecom.[11] (This company continues to provide mobile services, however.[10]) 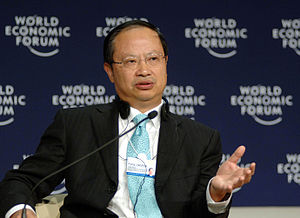 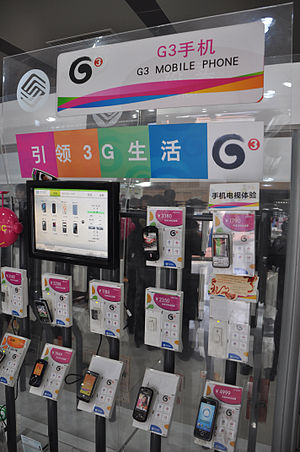 China Mobile has historically held a greater share of the rural market than competitors.[17] By 2006, its network had expanded to provide reception to 97% of the Chinese population,[18] and the company has since seen a sustained stream of new, rural mobile customers.[17]

It also offers services targeted at the rural market including an agricultural information service, which facilitates a variety of activities such as the sale and purchase of agricultural products, access to market prices for produce and crops, wire transfers, bank withdrawals, and payments, etc.[19]

The company branched out in 2007 with the purchase of Paktel in Pakistan[20] launching the Zong brand there a year later.[21]

In 2013, China Mobile eyed expansion into Myanmar expressing interest in bidding for one of two licences on offer in a partnership with Vodafone although this plan ultimately fell through.[22]

In May 2008, the company took over China Tietong, a fixed-line telecom[23] and the then third-largest broadband ISP in China[24] adding Internet services to its core business of mobile services.

China Mobile operates a GSM network,[25] which encompasses all 31 provinces, autonomous regions, and directly administered municipalities in Mainland China and includes Hong Kong, too.[2] GPRS is utilized for data transmission.[26]

Its 3G network, still under construction in 2010, utilizes the TD-SCDMA standard, which China Mobile helped develop. 3G service is available in all of the 4 direct-controlled municipalities and most of the 283 prefecture-level cities in China as of 2010.[28]

While prior iPhone models couldn't use the China Mobile network due to the chipset relying on WCDMA-based networks, talks to carry the then unreleased 4G iPhone (iPhone 5) began in mid-2012.[27] The iPhone 5c and iPhone 5s were sold through China Mobile starting in January 2014.[29]

In May 2011, China Mobile announced its network now includes the controversial Spratly Islands.[31]

China Mobile uses other names to differentiate its offerings.

Mobile services are available in Mainland China under several brands as of 2007.[34] As of 2013, the below brands are scheduled to be slowly phased out and replaced by an all-encompassing new brand name—And[35]—whose logo combines an exclamation point, the Chinese character for "peace" (Chinese: 和, Hanyu Pinyin: Hé), as well as the English word "and".[36]