From Infogalactic: the planetary knowledge core
Jump to: navigation, search
This article is about the Chinese base unit of currency. For the modern currency used in the People's Republic of China, see Renminbi.

listen)) is the base unit of a number of former and present-day Chinese currencies, and usually refers to the primary unit of account of the renminbi, the currency of the People's Republic of China.[1] It is also used as a synonym of that currency, especially in international contexts – the ISO 4217 standard code for renminbi is CNY, an abbreviation of “Chinese yuan”. (A similar case is the use of the terms sterling and pound to designate the British currency and unit.)

The symbol for the yuan (元) is also used in Chinese to refer to the currency units of Japan and Korea, and is used to translate the currency unit dollar as well as some other currencies; for example, the US dollar is called Meiyuan (Chinese: 美元; pinyin: Měiyuán; literally: "American yuan") in Chinese, and the euro is called Ouyuan (Chinese: 欧元; pinyin: Ōuyuán; literally: "European yuan"). When used in English in the context of the modern foreign exchange market, the Chinese yuan (CNY) refers to the renminbi (RMB), which is the official currency used in mainland China.

In Standard (Mandarin) Chinese, yuán literally means a "round object" or "round coin". During the Qing Dynasty, the yuan was a round coin made of silver.

In informal contexts, the word is written with the simplified Chinese character 元, that literally means "beginning". In formal contexts it is written with the simplified character 圆 or with the traditional version 圓, both meaning "round", after the shape of the coins.[2] These are all pronounced yuán in modern Standard Chinese, but were originally pronounced differently, and remain distinct in Wu Chinese: 元 = nyoe, 圓 = yoe.

In the People's Republic of China, '￥' or 'RMB' is often prefixed to the amount to indicate that the currency is the renminbi (e.g. ￥100元 or RMB 100元).

In many parts of China, the unit of renminbi is sometimes colloquially called kuài (simplified Chinese: 块; traditional Chinese: 塊, literally "piece") rather than yuán.

The traditional character 圓 is also used to denote the Hong Kong dollar, the Macanese pataca, and the New Taiwan dollar. However, they do not share the same names for the subdivisions. The New Taiwan dollar is also referred to in Standard Chinese as yuán and written as 元, 圆 or 圓.

The Japanese yen (en) was originally also written with the kanji (Chinese) character 圓, which was simplified to 円 with the promulgation of the Tōyō kanji in 1946.

The Korean won (won) used to be written with the hanja (Chinese) character 圜 from 1902 to 1910, and 圓 some time after World War II. It is now written as 원 in Hangul exclusively, in both North and South Korea.

In 1889, the Yuan was equated at par with the Mexican peso, a silver coin deriving from the Spanish dollar which circulated widely in South East Asia since the 17th century due to Spanish presence in the region, namely Philippines and Guam. It was subdivided into 1000 cash (Chinese: 文; pinyin: wén), 100 cents or fen (Chinese: 分; pinyin: fēn), and 10 jiao (Chinese: 角; pinyin: jiǎo, cf. dime). It replaced copper cash and various silver ingots called sycees. The sycees were denominated in tael. The yuan was valued at 0.72 tael, (or 7 mace and 2 candareens).[3]

The earliest issues were silver coins produced at the Guangdong mint, known in the West at the time as Canton, and transliterated as Kwangtung, in denominations of 5 cents, 1, 2 and 5 jiao and 1 yuan. Other regional mints were opened in the 1890s producing similar silver coins along with copper coins in denominations of 1, 2, 5, 10 and 20 cash.[3]Other regional mints were opened in the 1890s. The central government began issuing its own coins in the yuan currency system in 1903. Banknotes were issued in yuan denominations from the 1890s by several local and private banks, along with banks established by the Imperial government.

The central government began issuing its own coins in the yuan currency system in 1903. These were brass 1 cash, copper 2, 5, 10 and 20 cash, and silver 1, 2 and 5 jiao and 1 yuan. After the revolution, although the designs changed, the sizes and metals used in the coinage remained mostly unchanged until the 1930s. From 1936, the central government issued nickel (later cupronickel) 5, 10 and 20 fen and ​1⁄2 yuan coins. Aluminium 1 and 5 fen pieces were issued in 1940. 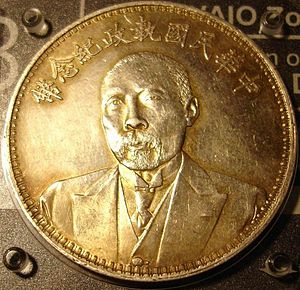 This table sets out the first "silver yuan" coins minted by each province. 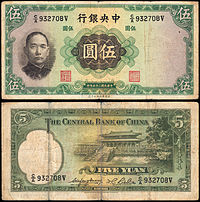 A 5 Yuan banknote issued by the Central Bank of China in the Republican era.

In 1917, the warlord in control of Manchuria, Zhang Zuolin, introduced a new currency, known as the Fengtien yuan or dollar, for use in the Three Eastern Provinces. It was valued at 1.2 yuan in the earlier (and still circulating) "small money" banknotes and was initially set equal to the Japanese yen. It maintained its value (at times being worth a little more than the yen) until 1925, when Zhang Zuolin's military involvement in the rest of China lead to an increase in banknote production and a fall in the currency's value. The currency lost most of its value in 1928 as a consequence of the disturbance following Zhang Zuolin's assassination. The Fengtien yuan was only issued in banknote form, with 1, 5 and 10 yuan notes issued in 1917, followed by 50 and 100 yuan notes in 1924. The last notes were issued in 1928.

After the revolution, a great many local, national and foreign banks issued currency. Although the provincial coinages mostly ended in the 1920s, the provincial banks continued issuing notes until 1949, including Communist issues from 1930. Most of the banknotes issued for use throughout the country bore the words "National Currency", as did some of the provincial banks. The remaining provincial banknotes bore the words "Local Currency". These circulated at varying exchange rates to the national currency issues. After the revolution, in addition to the denominations already in circulation, "small money" notes proliferated, with 1, 2 and 5 cent denominations appearing. Many notes were issued denominated in English in cash (wén).

During the 1930s, several new currencies came into being in China due to the activities of the invading Japanese. The pre-existing, national currency yuan came to be associated only with the Nationalist, Kuomintang government. In 1935, the Kuomintang Government enacted currency reforms to limit currency issuance to four major government controlled banks: the Bank of China, Central Bank of China, Bank of Communications and later the Farmers Bank of China. The circulation of silver yuan coins was prohibited and private ownership of silver was banned. The banknotes issued in its place were known as fabi (Chinese: 法幣; pinyin: fǎbì) or "Legal tender". A new series of base metal coins began production in 1936 following the reforms.

Between 1930 and 1948, banknotes were also issued by the Central Bank of China denominated in customs gold units. These, known as "gold yuan notes", circulated as normal currency in the 1940s alongside the yuan.

In July 1949, the Nationalist Government introduced the silver yuan, which was initially worth 500 million gold yuan. It circulated for a few months on the mainland before the end of the civil war. This silver yuan remained the de jure official currency of the Republic government in Taiwan until 2000.

The various Soviets under the control of China's communists issued coins between 1931 and 1935, and banknotes between 1930 and 1949. Some of the banknotes were denominated in chuàn, strings of wén coins. The People's Bank was founded in 1948 and began issuing currency that year, but some of the regional banks continued to issue their own notes in to 1949.

Notes were produced by many different banks. There were two phases of note production. The first, up until 1936, involved banks in a total of seven areas, most of which were organized as Soviets. These were:

As the communist forces took control of most of China, they introduced a new currency, in banknote form only, denominated in yuan. This became the sole currency of mainland China at the end of the civil war. A new yuan was introduced in 1955 at a rate of 10,000 old yuan = 1 new yuan, known as the renminbi yuan. It is the currency of the People's Republic of China to this day.

In 1946, a new currency was introduced for circulation in Taiwan, replacing the Japanese issued Taiwan yen. Known as the Old Taiwan dollar. It was not directly related to the mainland yuan.

In 1949, a second yuan was introduced in Taiwan, replacing the first at a rate of 40,000 to 1. Known as the New Taiwan dollar, it remains the currency of Taiwan.

Originally, a silver yuan had the same specifications as a silver Spanish dollar. During the Republican era (1911–1949), the transliteration "yuan" was often printed on the reverse of the first yuan banknotes but sometimes "dollar" was used instead.[4]

In the Republic of China, the common English name is the "New Taiwan dollar" but banknotes issued between 1949 and 1956 used "yuan" as the transliteration.[5] More modern notes lack any transliteration.