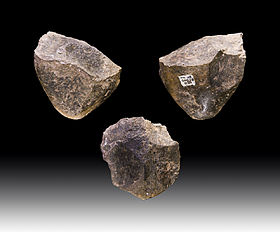 Oldowan to 1.7 million years before our era - Hadar

Archaeologists define a chopper as a pebble tool with an irregular cutting edge formed through the removal of flakes from one side of a stone.

Choppers are crude forms of stone tool and are found in industries as early as the Lower Palaeolithic from around 2.5 million years ago. These earliest known specimens were found in the Olduvai Gorge in Tanzania by Louis Leakey in the 1930s. The name Oldowan was given to the tools after the site in which they were excavated. These types of tools were used an estimated time range of 2.5 to 1.2 million years ago.[1]

To create this tool, one would have to use a hammerstone to chip away flakes on the stone to create a side of the stone with a very sharp edge, allowing for the cutting and hacking of an object. This is a unique type of lithic reduction due to only a single side of the stone being retouched to produce the cutting surface of the stone. The side that does not do the cutting is left unscathed, an unusual practice. These old instruments were made from specific materials. Initially, they were composed of quartz, quartzite, basalt, or obsidian. In the later years of the oldowan age, two other materials were used: flint and chert. These materials could hold an edge while fairly easy to craft into the shape desired. The tool is designed to fit in the palm of the hand, and it is not attached to any other mount that could possibly be used. Known as one of the earliest tools (if not the earliest), its design is a very simple piece of technology, but its performance was very successful in many different scenarios. Seeing the history of these objects and how many cultures used them, it is not a surprise to find spread throughout the world. A potential stone mass found today could be classified as a chopper if a worn edge showing signs of evidence of tool use is present.[2]

Choppers are not solely limited to a single area on Earth:

Though many choppers have been found in each region, this does not mean that the tools found are similarly made. Differences include the shape, length, material used, and other factors. This shows the variation among ancient cultures of the time and how each suited specific needs for each community.

The ancient peoples that inhabited the earth had many different stone tools to perform various activities. Many stone cores were used to craft weapons and to hunt the necessary animals that provided food, such as spearheads, arrowheads, and knives. However, choppers were used for many different purposes. Used for hacking, cutting, and chopping, choppers allowed early peoples to sever soft materials, especially meat and wood. One of the main uses of choppers was to cut through the meat and skins of hunted animals to obtain food, hide, and fur. The sharpness of the tool improved the overall process. Ridges and cut marks on bones can prove their use for the task. Also, these tools were used on plants, such as digging up roots and shaving and chopping wood.[6]

Later in history, it seems that choppers were being outdated by newer technology. The handheld tools for scraping and cutting were no longer sought after, for tools with shapes that fit the hand seemed to be the upcoming trend. Starting about 1.6 million years ago, this new technology evolution emerged, known as the Acheulean tradition. Tools classified under this category are known as the earliest indicators of hand axe usage. The biggest difference from the early oldowan tools, or choppers, is the fact that two sides have had flakes chipped off, versus the single side of the chopper.[7]

Initial theories proposed by G. Isaac (1970s) that choppers were used for hunting and butchering. However, the size of the choppers did not suggest that it could be powerful enough to actually kill animals like the hippopotamus. L. Binford then proposed that animals were killed by carnivores and Homo was just a scavenger. This theory was tested by P. Shipman and R. Potts. Since the cutmarked bones were tooth marked and there were no carcasses or disarticulation of any leftovers, the evidence pointed at the idea of Homo being a scavenger.