Christopher W. "Chris" Cooper (born July 9, 1951) is an American film actor. He became well known in the late 1980s. He has appeared in supporting performances in several major Hollywood films, including the drama American Beauty (1999), the biopic about a NASA engineer titled October Sky (1999), the action spy film The Bourne Identity (2002), the biographical sports psychological-drama thriller film Seabiscuit (2003), the biographical film about Truman Capote, Capote (2005), the geopolitical thriller Syriana (2005), the action-thriller The Kingdom (2007), the crime drama The Town (2010), and the musical comedy film The Muppets (2011).

Cooper won both the Academy Award and Golden Globe Award for Best Supporting Actor for his role in the comedy-drama metafilm Adaptation (2002). He played a lead role in the historical and political thriller Breach (2007), playing FBI agent and traitor Robert Hanssen. He played Daniel Sloan in the 2012 political action thriller The Company You Keep, and supervillain Norman Osborn in The Amazing Spider-Man 2 (2014).[1]

Cooper was born in Kansas City, Missouri, the son of Mary Ann, a homemaker, and Charles Cooper, who served as a doctor in the United States Air Force and operated a cattle ranch.[2] He has an older brother, Chuck, and grew up as a self-described "blue-collar cowpoke"[3] in Houston, Texas, and Kansas City. During his time in Kansas City, Cooper performed with The Barn Players, a local community theater that has operated since 1955. He went on to serve in the United States Coast Guard Reserve. He attended Stephens College, where he studied ballet, and then the University of Missouri, where he double-majored in the school of Agriculture and the school of Drama. After graduation, Cooper moved to New York City to pursue an acting career.

Some of his more notable later performances include: Money Train, as a psychotic pyromaniac who terrifies toll booth operators; Lone Star, in a rare leading role as a Texas sheriff charged with solving a decades-old case; as Deputy Dwayne Looney in director Joel Schumacher's 1996 film A Time to Kill (based on the John Grisham novel); as Frank Booker in 1998's The Horse Whisperer; and as a homophobic Marine Corps colonel in American Beauty, a role that garnered him a Screen Actors Guild Award nomination for Best Supporting Actor. To get into character, Cooper said he "depended on a friend who’d fought in Vietnam. I asked him to go deep. What would this man have done? What would be on his walls? On his desk?"[4]

In 2000, Cooper played Colonel Harry Burwell (inspired by "Lighthorse Harry" Lee) in The Patriot. He was nominated for another Screen Actors Guild Award, a BAFTA Award, and won an Academy Award for Best Supporting Actor and a Golden Globe Award in 2003 for playing the role of John Laroche in Adaptation. In 2002, Cooper also appeared in The Bourne Identity as a ruthless CIA special ops director, a role he reprised (in flashbacks) in The Bourne Supremacy.

Cooper appeared in three acclaimed films in 2005: Jarhead (which reunited him with American Beauty director Sam Mendes and October Sky actor Jake Gyllenhaal); Capote; and Syriana. He also acted in the thriller Breach, playing real-life FBI agent and traitor Robert Hanssen. Cooper commented that Breach was "the first studio film where they've considered me the lead [actor]". In 2007, he appeared as a government agent in dangerous territory in the action thriller The Kingdom and voiced the character Douglas in the film adaptation of Maurice Sendak's book, Where the Wild Things Are (2009).

At the 2010 Sundance film festival, Cooper appeared alongside Ben Affleck in the drama, The Company Men, early reviews of which praised Cooper's performance as "pitch-perfect".[5]

Cooper portrayed Norman Osborn in the 2014 film The Amazing Spider-Man 2 but, for unknown reasons, he wasn't credited for this role. 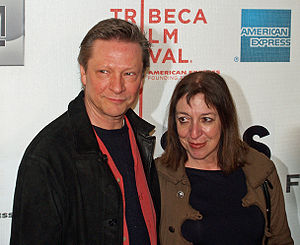 Cooper resides in Kingston, Massachusetts, with his wife, Marianne Leone Cooper, whom he married in 1983. In 1987, their son Jesse Lanier Cooper was born. Three months premature, Jesse developed a cerebral hemorrhage and cerebral palsy. After searching for the best schools for children with special needs, Cooper and Leone moved to Kingston, where they became strong advocates for exceptional children.[6] Jesse was eventually mainstreamed into Silver Lake Regional High School, where he became an honor student. On January 3, 2005, Jesse Cooper died suddenly and unexpectedly from epilepsy. A memorial fund was set up in his name, the Jesse Cooper Foundation.[citation needed]