City and Guilds of London Institute

The City and Guilds of London Institute (City & Guilds) is a vocational education organisation in the United Kingdom. City & Guilds offers more than 500 qualifications over the whole range of industry sectors through 8500 colleges and training providers in 81 countries worldwide. Two million people every year start City & Guilds qualifications, which span all levels from basic skills to the highest standards of professional achievement (Honours, Master and Post Doctorate levels equivalent).

Founded on November 11, 1878 by the City of London and 16 livery companies – the traditional guardians of work-based training – to develop a national system of technical education, City & Guilds has been operating under Royal Charter (RC117), granted by Queen Victoria, since 1900. The Prince of Wales later King Edward VII was then appointed the first President of the Institute.

City & Guilds is a registered charity (no. 312832). The Institute's president is now HRH The Princess Royal who accepted this role in June 2011 (following her father HRH The Duke of Edinburgh who held the position for nearly 60 years), and the current Chairman of Council is Sir John Armitt, took office in November 2012.

A meeting of 16 of the City of London's livery companies in 1876 led to the foundation of the City and Guilds of London Institute for the Advancement of Technical Education (CGLI), which aimed to improve the training of craftsmen, engineering technicians, engineering technologists, and professional engineers. The two main objectives were to create a Central Institution in London and to conduct a system of qualifying examinations in technical subjects.[1]

Unable at once to find a large enough site within the City of London for their Central Institution, the CGLI occupied a building on land alongside Exhibition Road in South Kensington, although its headquarters were in Gresham College in the City. At the time John Watney was both secretary to the Gresham Committee and the CGLI. Evening classes were offered at a school in Cowper Street, off City Road, enabling instruction in chemistry and physics to be provided to those who wished to continue their education after working during the day. The school proved such a success that new premises had to be found in nearby Leonard Street, which was formally opened on 19 February 1893 as Finsbury Technical College. The Institute's director at the time was Sir Philip Magnus, later University MP. Finsbury College was intended as the first of a number of 'feeder' colleges for the Central Institution, but was almost the only one founded; although The City & Guilds of London Art School was established in 1879 in Kennington as an extension of the Lambeth School of Art to provide training in carving, modelling and architectural decoration. Finsbury College continued its separate existence until 1926.

Faced with their continuing inability to find a substantial site, the Companies were eventually persuaded by the Secretary of the Science and Art Department, General Sir John Donnelly (who was also a Royal Engineer) to found their institution on the eighty-seven acre (350,000 m²) site at South Kensington bought by the 1851 Exhibition Commissioners (for GBP 342,500) for 'purposes of art and science' in perpetuity.

The Central Technical College building was designed by Alfred Waterhouse, better known as the architect of the Natural History Museum. Located adjacent to the Central Institute on the site were the Royal School of Mines and the Royal College of Science.

Although the City & Guilds College was for much of its life governed through Imperial College, the City and Guilds Institute, together with a number of livery companies in their own right, have maintained seats on the governing body (the Court) of Imperial College. The Institute also continues to award the Diploma of Associateship of the City & Guilds of London Institute (ACGI), first awarded to students of the Central Institution who joined the earliest 3-year full-time courses which started in February 1885.

The Links Club is a club for students and alumni of the Faculty of Engineering, Imperial College, formerly The City and Guilds College. Members are elected on the basis of good sportsmanship and meet each Thursday in South Kensington. 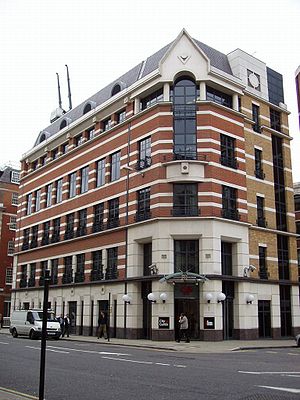 In 1953 the Associated Examinations Board (AEB) was established and administered by City & Guilds.

1964 saw the creation of the National Examining Board for Supervisory Management (NEBSM) as part of the City & Guilds group, specialising in qualifications for supervisors and junior managers.

In 1974, the Business Education Council (BEC) was established, again administered by City & Guilds. This had a remit to rationalise and improve the relevance of sub-degree vocational education in Further Education and Higher Education colleges and in Polytechnics. Within 18 months, BEC took over responsibility for non-technical ONCs, ONDs, HNCs, HNDs and other qualifications.

BEC merged with TEC in 1984 to form the separately administered Business & Technology Education Council (BTEC). This then merged with the University of London Examinations & Assessment Council (ULEAC) in 1996 to form Edexcel.

In 1990 City & Guilds purchased the Pitman Examinations Institute, and Pitman Qualifications Single Subject awards in business and administration and English language proved to be successful worldwide.

In 2004, the National Proficiency Tests Council (NPTC) - specialists for agricultural land based qualifications - became part of the City & Guilds Group.

In 2005, the Hospitality Awarding Body (HAB) - specialists in awards for hospitality and catering - became part of the City & Guilds Group. In January 2010, all active candidates were transferred to City & Guilds courses in order to remove duplicate award provision across the Group.

In 2008, the City & Guilds Centre for Skills Development was formed as part of the City & Guilds Group. Its mission is to influence and improve skills policy and practice worldwide through an evidence-based approach.

City & Guilds continues as an examination board offering a large number of qualifications mapped onto the British National Qualifications Framework (NQF). The most common are the vocational qualifications, from Entry-level to Level 3.

The range of vocational qualifications cover the 'traditional' areas such as engineering technician, arts and craft, tradesman, health and social care, hairdressing, automotive maintenance, construction, and catering, but also the more obscure such as sheep shearing, DJing, flower arranging and even door supervision (bouncer).

These qualifications consist of outcomes-based units, covering core, specialised, and key management areas, which are assessed by means of written assignment.[5]

The Higher Professional Diploma (HPD) is suitable for people who want to gain both advanced technical skills and broader management knowledge. The qualification comprises 12 units in total, mapped at level 4 of the QCF.

The Master Professional Diplomas (MPD) is suitable for those working at the highest levels in a relevant industry. The qualification comprises 8 units in total, mapped at level 7 of the QCF

(Former Senior Awards) As of Aug 2013 the awards are called - Professional Recognition Awards. In addition to Royal Charter (The highest level of Accreditation in UK) the awards are NQF (National Qualifications Framework) accredited qualifications which enable candidates to demonstrate their knowledge and skills within any sector or role. Those achieving these awards will be entitled to use an appropriate, internationally recognised post-nominal: Licentiateship (LCGI), Affiliateship (AfCGI), Graduateship (GCGI) and Membership (MCGI). They can also help candidates working towards higher level qualifications.

These qualifications are ideal for those working at the highest professional levels in any role or sector and looking for an accredited qualification to provide recognition of their knowledge and skills. [6]

The learner would typically: have first-line responsibility for managing day-to-day activities; manage resources in own area of responsibility; constructively work with others to develop and maintain good working relationships; develop and maintain good customer relationships; identify and access opportunities for professional development; be able to apply professional standards in own area of responsibility; take into account the views and perspectives of others in decision-making; communicate effectively and manage information in line with organisational and legal requirements; consistently meet aims and objectives; exercise autonomy and judgment in work role; and address problems that are well-defined but non-routine. Applicants must provide evidence that they have performed competently in a relevant work environment. Evidence of industrial achievement may take the form of an industrial qualification (e.g. an industry-recognised apprenticeship) or confirmation from a current or recent employer of at least five years’ appropriate employment.

The learner would typically: have line management responsibilities; anticipate, plan and lead change; manage constructively work with others to develop and maintain good working relationships; set direction and inspire others to work together to achieve challenging outcomes; generate creative ideas to inform best practice and continual improvement; monitor compliance with professional standards; implement an effective communication strategy; develop and maintain good customer relationships to support the customer-focused culture of the organisation; analyse, identify and access professional development; address problems that are well-defined but complex and non-routine; and exercise autonomy and judgment in decision-making which takes into account the views and perspectives of others.

The learner would typically address problems that are complex and non-routine and use autonomy to make judgments, demonstrating an ability to understand different perspectives, approaches and schools of thought. Academic standing = UK Honours Undergraduate Degree (BSc)

GCGI is equal/equivalent to the Level 6 Graduate Diploma in Engineering set at the standard of the final (third) year of a British BEng (Honours) degree. It is advised that the Level 6 Graduate Diploma in Engineering consist of 1800 Notional Hours (total learning hours including the Guided Learning Hours and self study/research).

This is not a qualification, it is an honour - the highest that City & Guilds awards - conferred by the Council of the City and Guilds of London Institute, as authorised by its Royal Charter. First awarded in 1892, it recognises outstanding professional and personal achievement. Fellowship is not a qualification that can be earned nor does it form part of a progression route; it is an honour bestowed by Council upon exceptional individuals who have demonstrated excellence in their field, gained the respect of their peers and can be considered role models for their profession. Until 1990, Fellowship was exclusive to holders of the Associateship (ACGI), namely engineering graduates from the City & Guilds College, one of the constituent colleges of Imperial College London. Since 1990 it has been open to all those who have made outstanding achievements in sectors and activities relevant to the work of City & Guilds. Fellows are entitled to use the post-nominals FCGI after their name. Under the Institute's Royal Charter (1900), Fellowship may also be awarded Honoris Causa (HonFCGI).

OfQual NQF (National Qualifications Framework) accredited qualifications which enable candidates to demonstrate their knowledge and skills within any sector or role. Those achieving these awards will be entitled to use an appropriate, internationally recognised post-nominal: Licentiateship (LCGI), Affiliateship (AfCGI), Graduateship (GCGI) and Membership (MCGI).

City & Guilds higher level qualifications are yet to be recognised in some parts of the world, e.g. Jamaica. The University Council of Jamaica (UCJ) is currently considering the qualifications at different levels, granted via assessment and learning.