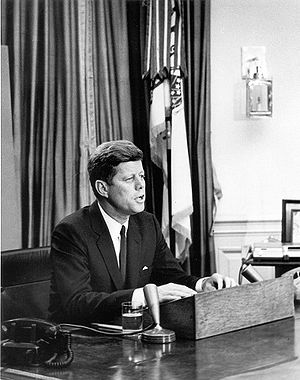 Kennedy delivers his speech from the Oval Office.

The Civil Rights Address was a speech on civil rights, delivered on radio and television by U.S. President John F. Kennedy from the Oval Office on June 11, 1963 in which he proposed the Civil Rights Act of 1964. The address transformed civil rights from a legal issue to a moral one.[1] The speech was in response to the U.S. National Guard being sent to protect two African American students Vivian Malone and James Hood enrolling at the University of Alabama. "Threats and defiant statements" were made towards these students, due to their race. Kennedy stated that the National Guard was at the college "to carry out the final and unequivocal order of the United States District Court of the Northern District of Alabama". This order called for the two qualified Alabama residents to be admitted to the university, even though they happened to have been born Negro. These students had to be backed by troops just to enter the school.[2]

In his extremely moving speech, Kennedy called Americans to recognize civil rights as a moral cause that all people need to contribute to. "We are confronted primarily with a moral issue.... It is as old as the scriptures and is as clear as the American Constitution.... One hundred years of delay have passed since President Lincoln freed the slaves, yet their heirs... are not fully free. They are not yet freed from the bonds of injustice... this Nation... will not be fully free until all its citizens are free.... Now the time has come for this Nation to fulfill its promise."[3] He conveyed how the proposed legislation would lead the nation to finally end unjust discrimination against African Americans. It would also provide equal treatment to all African Americans.[3]

A movement had been created and led by African Americans and their allies for their Civil Rights. This movement reached “center stage” in American politics by 1963. President Kennedy became an ally of this movement, and added the moral weight of his presidency to the demand for civil rights. In the Civil Rights Address, Kennedy explained the economic, educational, and moral dimensions of racial discrimination. The president further announced that he would be submitting legislation to Congress to ensure equal access to public accommodations, education and to address other aspects of discrimination.

After his address, Martin Luther King, Jr. called President Kennedy's "civil rights proposals, 'the most sweeping and forthright ever presented by an American president'." He went on to predict the legislation would 'take the Nation a long, long way toward the realization of the ideals of freedom and justice for all people'."[4] Seven months after Kennedy was assassinated the Civil Rights Act of 1964 became law on July 2, 1964. The Civil Rights Act of 1964 abolishes discrimination in public accommodations, employment, and federally funded programs.

Kennedy's progressive stance is noted in his moderating of the language of Theodore Sorensen's draft. For example, Sorensen's call for Congress "to act, boldly" "to give the enforceable right to be served in facilities which are open to the public" became Kennedy's "to act" to "give" the rights to Black Americans.[1]