The Claiborne Pell Bridge, commonly known as the Newport Bridge, is a suspension bridge operated by the Rhode Island Turnpike and Bridge Authority that spans the East Passage of the Narragansett Bay in Rhode Island (northeastern United States). The bridge, part of RI 138, connects the City of Newport on Aquidneck Island and the Town of Jamestown on Conanicut Island, which in turn is connected to the mainland by the Jamestown Verrazzano Bridge.

The main span of the Newport Bridge is 488 metres (1,601 ft), ranking it number 87 among the longest suspension bridges in the world, and making it the longest suspension bridge in New England. The overall length of the bridge is 3,428 meters (11,247 ft). Its main towers reach 122 meters (400 ft) above the water surface, and the roadway height reaches as high as 66 meters (215 ft).[2] It is four lanes wide, two in each direction. On a clear day, the bridge's towers are visible from the observation plaza at the Gay Head Light in Aquinnah on the Massachusetts island of Martha's Vineyard, the upper levels of the city of Providence's tallest buildings (approximately 22 miles), and as far northwest as the parking lot of Stone Hill Marketplace in Johnston, RI (approximately 23 miles). Similarly, the skyline of Providence is visible from the bridge deck.

The Claiborne Pell Newport Bridge is a toll bridge, and the cash toll is US$4.00 for cars (as of 2015). E-ZPass is accepted, and Rhode Island residents with a Rhode Island E-ZPass pay a discounted toll of only 83 cents once they sign up for the RIR-RI Resident Discount Plan. Early in 2012, the Authority had voted to raise tolls for passenger vehicles to $5. However on June 15, 2012 this plan was abolished as Rhode Island lawmakers approved tolls to be added to the newly built Sakonnet River Bridge in the future.[3] The bridge also charges a fee equal to the toll for improperly mounted E-ZPass transponders that require a toll-booth operator to manually raise the gate.[4] Out-of-state residents pay full price, even with a Rhode Island E-ZPass, making this bridge the only toll facility in the U.S. to give a residence discount that isn't limited to the adjacent neighborhoods. The bridge was the only toll road in Rhode Island until August 19, 2013, when the Authority began collecting tolls on the new Sakonnet River Bridge.[5] However, toll collection on that bridge ended on June 20, 2014.[6]

In the spring of 2012, the Bridge Authority brought Open Road Tolling to the Pell bridge, allowing drivers with E-ZPass to pass through a special E-ZPass only toll lane at 40 mph. Violators are subject to a $10 fine, on top of the unpaid toll. The new lanes opened to traffic on June 22, in time for the America's Cup sailing race being held in Newport.

Prior to the establishment of the E-ZPass system of toll collection, toll discounts were available to the general population through the use of tokens. A roll of 9 bridge crossing tokens could be purchased for $10 (plus one free crossing) bringing the effective price per crossing $1, available to anyone. Establishment of the E-ZPass system and elimination of tokens also eliminated discounts for non-residents. 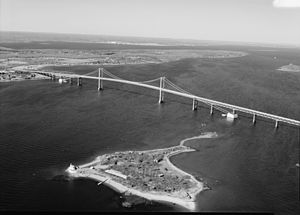 The bridge was constructed from 1966 to 1969 at a cost of U.S.$54,742,000 by the Parsons, Brinckerhoff, Quade & Douglas company. The bridge was renamed for U.S. Senator Claiborne Pell in 1992, but is still commonly referred to as the Newport Bridge by residents and historians. The bridge is featured on the Rhode Island state quarter.

Bicycles are not permitted on this bridge, but Rhode Island Public Transit Authority bus #64 has bike racks for weekday and Saturday travel.[8]