From Infogalactic: the planetary knowledge core
(Redirected from Clan MacDonnell of Glengarry)
Jump to: navigation, search

Clan MacDonell of Glengarry is a Scottish clan and is a branch of the larger Clan Donald.[2] The clan takes its name from Glen Garry where the river Garry runs eastwards through Loch Garry to join the Great Glen about 16 miles (25 km) north of Fort William, Highland.

Origins of the clan

Glengarry is in Lochaber which was part of the ancient Kingdom of Moray that was ruled by the Picts.[2] Ranald was the son of John of Islay, Lord of the Isles, and Ranald himself had five sons.[2] One of them was Alan, the progenitor of the Clan Macdonald of Clanranald and another was Donald.[2] Donald married twice: firstly Laleve, daughter of the chief of Clan MacIver, by who he had one son named John.[2] Donald married secondly a daughter of the chief of the Clan Fraser of Lovat by whom he had two more sons, Alexander and Angus.[2] The first son, John, died without heirs and was therefore succeeded by his half-brother Alexander.[2] Alexander is sometimes considered the first true chief of Glengarry but is usually regarded as the fourth.[2]

Glengarry did not play an important part in the politics of Clan Donald until the late fifteenth century.[2] Traditional rights of the chiefs were being replaced with feudal relationships in which the Crown was the ultimate superior, as part of the royal policy to pacify the Scottish Highlands.[2] Most of the chiefs submitted to James V of Scotland and even the Clan Macdonald of Clanranald accepted charters in 1494.[2] However Alexander of Glengarry did not receive a charter, suggesting that he continued to have a rebellious attitude at this time.[2] Finally in 1531 he submitted to royal authority and was pardoned for past offences.[2] He received a Crown charter on 9 March 1539 for the lands of Glengarry, Morar, half the lands of Loch Alsh, Lochcarron, Loch Broom and also Strome Castle.[2] This did not stop Alexander following Donald Gorm Macdonald of Sleat in trying to reclaim the Lordship of the Isles.[2] Donald Gorm was killed attacking Eilean Donan Castle and the rebellion collapsed.[2]

File:Strome Castle - geograph.org.uk - 1479238.jpg
Ruins of Strome Castle, the original seat of the chiefs of the Clan MacDonell of Glengarry

Subsequently Alexander of Glengarry was amongst the island chiefs who were tricked into meeting James V at Portree and was imprisoned at Edinburgh where he remained until the king died in 1542.[2] Glengarry himself died in 1590.[2] His son was Angus who was politically astute and used the influence of his father-in-law, the chief of Clan Grant, to gain a charter from James VI of Scotland, regaining his ancestral estates in 1574.[2]

In a bond of manrent, dated 1571, between Angus MacAlester of Glengarry and Clan Grant, Glengarry makes an exception in favour "of ye auctoritie of our soverane and his Chief of Clanranald only ". This is held by Clanranald of Moydart as an acknowledgment by Glengarry of the Captain of Clanranald as his chief.[3]

File:Invergarry Castle - geograph.org.uk - 488536.jpg
Ruins of Invergarry Castle, a later seat of the chiefs of the Clan MacDonell of Glengarry, undergoing stabilisation work in 2007.

The Battle of Morar was fought in 1602 between the Clan MacDonell of Glengarry and the Clan Mackenzie.[4]

Angus's son was Donald, 8th chief of the Clan MacDonell of Glengarry who is reputed to have lived for over one hundred years.[2] In March 1627 he obtained a charter under the great seal that erected Glengarry into a free barony.[2] Donald did not always enjoy royal favour as a year earlier he had been invited to join Lord Ochiltree, the king's representative, on board a ship to discuss the royal policy for the isles.[2] They disagreed with king's plans and as a result were arrested and imprisoned.[2]

During the Scottish Civil War, Donald was too old for active campaigning so effective leadership passed to his son, Aeneas, 9th chief of the Clan MacDonell of Glengarry.[2] He became chief on the day that his grandfather died which was also the same day that James Graham, 1st Marquis of Montrose won his great victory at the Battle of Inverlochy, and Aeneas was with Montrose at that victory.[2] He was also with Montrose at the subsequent victory at the Battle of Auldearn.[2] Five hundred men of the Clan MacDonell of Glengarry were with Montrose at his most impressive pitched battle, the Battle of Kilsyth, where they routed General Ballie.[2] When Montrose was finally defeated at the Battle of Philiphaugh he was sheltered by Aeneas at Invergarry Castle.[2] Aeneas was devoted to the Stuart cause and led his men into England only to be defeated at the Battle of Worcester in 1651.[2] He escaped but his estates were forfeited under Oliver Cromwell's Commonwealth.[2] At the Restoration, Aeneas was rewarded with the title Lord Macdonell and Aros.[2]

During the Jacobite rising of 1715 the Clan MacDonell of Glengarry fought for the Stuart cause at the Battle of Sheriffmuir.[2] When the captain of the Clan Macdonald of Clanranald was killed, Alasdair of Glengarry is said to have rallied the Highlanders by throwing up his bonnet and crying Revenge today and mourning tomorrow.[2] In 1716 Alasdair was raised to the peerage as Lord Macdonell by James Francis Edward Stuart (the Old Pretender), but this title was of course only recognised by the Jacobites.[2]

During the Jacobite rising of 1745, Alasdair Ruadh, thirteenth chief of Glengarry, was captured by an English frigate when travelling from France to join the rising.[2] He was imprisoned in the Tower of London and not released until 1747.[2]

However, six hundred of the Macdonells of Glengarry joined Prince Charles under the command of MacDonell of Lochgarry and were involved in many of the battles including the Highbridge Skirmish which was the first engagement between Government and Jacobite troops during the uprising of 1745 to 1746. The Macdonells of Glengarry also fought at the Clifton Moor Skirmish and Battle of Prestonpans in 1745 where they were victorious. The following year they also fought at the Battle of Falkirk, and the Battle of Culloden.

In the late 18th Century, the majority of the Clan MacDonell of Glengarry emigrated to the historic Glengarry County, Ontario (which is named after the Clan) as a result of the Highland Clearances and other economic conditions to look for a better life and to also preserve their Scottish Highland Culture. 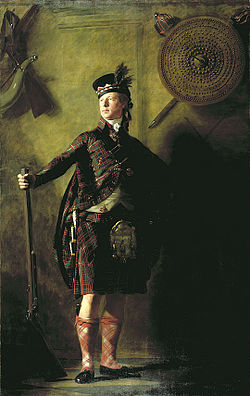 Alexander Ranaldson MacDonell was the personality whose character and behaviour gave Walter Scott the model for the haughty and flamboyant Highland chieftain Fergus MacIvor in the pioneering historical novel Waverley of 1814. As was customary for the chief of a clan, he was often called simply "Glengarry." In June 1815 he formed the Society of True Highlanders which eventually came to bitterly oppose the Celtic Society of Edinburgh. During the visit of King George IV to Scotland he arrogantly made several unauthorised appearances, to the annoyance of Walter Scott and the other organisers.

Under his authority timber was felled for sale, the cleared land was leased to sheep farmers and many of his clansmen were forced from the land by increasing rents and evictions, with the great majority forced to go to British North America (His clan primarily in Glengarry County, Ontario) in part of what was later known as the Highland Clearances.

In contrast to Alexander Ranaldson MacDonell of Glengarry, his contemporary Alexander Macdonell became a Roman Catholic priest whose missionary duty in Brae Lochaber led him to help his displaced clansmen. First he tried getting them employment in the Lowlands, then in 1794 he organised formation of the Glengarry Fencible regiment under the command of Alexander Ranaldson, with Father Macdonell appointed chaplain. When the regiment was disbanded Father Macdonell appealed to the government to grant its members land in Upper Canada but this was not realised until much later. He himself came to Upper Canada, settled in Glengarry County in 1804 and in 1826 was elevated to Bishop of Regiopolis Kingston.