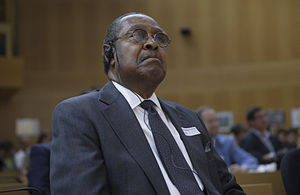 Clarence B. Jones (born January 8, 1931) is the former personal counsel, advisor, draft speech writer and close friend of Dr. Martin Luther King, Jr. He is a Scholar in Residence at the Martin Luther King, Jr. Institute at Stanford University. He is the author of What Would Martin Say? (HarperCollins, 2008) and "Behind the Dream: The Making of the Speech that Transformed a Nation" (Palgrave-Macmillan, 2011)

In 1962, Martin Luther King Jr. wrote a letter recommending his lawyer and advisor, Clarence B. Jones, to the New York State Bar, stating: “Ever since I have known Mr. Jones, I have always seen him as a man of sound judgment, deep insights, and great dedication. I am also convinced that he is a man of great integrity”.[1]

Jones was born January 8, 1931 to parents who were domestic workers in Philadelphia, Pennsylvania, and was raised in a foster home and a boarding school in New England. He graduated from Palmyra High School in Palmyra, NJ. [2]

Following his discharge, Jones returned to Columbia to complete his BA in 1956. That year he began attending Boston University School of Law, obtaining his LLB in 1959. He and his wife Anne moved to Altadena, California, where Jones established a practice in entertainment law.

In 1967, at age 36, Jones joined the investment banking and brokerage firm of Carter, Berlind & Weill where he worked alongside future Citigroup Chairman and CEO, Sanford I. Weill and Securities and Exchange Commission Chairman, Arthur Levitt. Jones was the first African-American to be named an allied member of the New York Stock Exchange.[3]

Jones joined the team of lawyers defending King in the midst of King’s 1960 tax fraud trial; the case was resolved in King’s favor in May 1960. Jones and his family relocated to New York to be close to the Harlem office of the Southern Christian Leadership Conference (SCLC), and he joined the firm of Lubell, Lubell, and Jones as a partner. In 1962, Jones became general counsel for the Gandhi Society for Human Rights, SCLC’s fundraising arm.

Later 1962, Jones would advise King to write President John F. Kennedy on the Cuban Missile Crisis. He urged King to make a statement because “your status as a leader requires that you not be silent about an event and issues so decisive to the world” (Jones, 1 November 1962).

Jones accompanied King, Wyatt Tee Walker, Stanley Levison, Jack O’Dell, and others to the SCLC training facility in Dorchester, Georgia, for an early January 1963 strategy meeting to plan the Birmingham Campaign. Following King’s 12 April arrest in Birmingham for violating a related injunction against demonstrations, Jones secretly took from jail King’s hand-written response to eight Birmingham clergymen who had denounced the protests in the newspaper. It was typed and circulated among the Birmingham clergy and later printed and distributed nationally as “Letter from Birmingham Jail”. Jones helped secure bail money for King and the other jailed protesters by flying to New York to meet with New York Governor Nelson Rockefeller, who gave Jones the bail funds directly from his family’s vault at Chase Manhattan Bank.

Jones continued to function as King’s lawyer and advisor through the remainder of his life, assisting him in drafting the first portion of the 1963 “I Have a Dream” speech[1] at Jones' house in Riverdale, N.Y[4] and preserving King’s copyright of the momentous address; acting as part of the successful defense team for the SCLC in New York Times v. Sullivan; serving as part of King’s inner circle of advisers, called the “research committee”; representing King at meetings (for example the Baldwin-Kennedy meeting); and contributing with Vincent Harding and Andrew Young to King’s “Beyond Vietnam” address at New York’s Riverside Church on 4 April 1967.

After King’s death, Jones served as one of the negotiators during the 1971 prison riot at Attica, and was editor and part owner of the New York Amsterdam News from 1971 to 1974. In summing up his sentiments on King’s life, Jones remarked in a 2007 interview: “Except for Abraham Lincoln and the Emancipation Proclamation of 1863, Martin Luther King, Jr., in 12 years and 4 months from 1956 to 1968, did more to achieve justice in America than any other event or person in the previous 400 years” (Jones, 18 May 2007).[1][5]