Classical Chinese (Chinese: 文言文; pinyin: wényán wén; literally: "literary language writing"), also known as "Literary Chinese",[lower-alpha 1] is the language of the classic literature from the end of the Spring and Autumn period through to the end of the Han Dynasty, a written form of Old Chinese. Classical Chinese is a traditional style of written Chinese that evolved from the classical language, making it different from any modern spoken form of Chinese. Literary Chinese was used for almost all formal writing in China until the early 20th century, and also, during various periods, in Japan, Korea and Vietnam. Among Chinese speakers, Literary Chinese has been largely replaced by written vernacular Chinese, a style of writing that is similar to modern spoken Mandarin Chinese, while speakers of non-Chinese languages have largely abandoned Literary Chinese in favor of local vernaculars.

Literary Chinese is known as kanbun in Japanese, hanmun in Korean (but see also gugyeol), and Hán văn in Vietnamese (From 漢文 in all three cases; pinyin: hànwén, "Han writing").

Strictly speaking, Classical Chinese refers to the written language of the classical period of Chinese literature, from the end of the Spring and Autumn Period (early 5th century BC) to the end of the Han Dynasty (220 AD),[2] while Literary Chinese is the form of written Chinese used from the end of the Han Dynasty to the early 20th century, when it was replaced by vernacular written Chinese. It is often also referred to as "Classical Chinese", but sinologists generally distinguish it from the language of the early period. During this period the dialects of China became more and more disparate and thus the Classical written language became less and less representative of the varieties of Chinese (cf. Classical Latin, which was contemporary to the Han Dynasty, and the Romance languages). Although authors sought to write in the style of the Classics, the similarity decreased over the centuries due to their imperfect understanding of the older language, the influence of their own speech, and the addition of new words.[3]

This situation, the use of Literary Chinese throughout the Chinese cultural sphere despite the existence of disparate regional vernaculars, is called diglossia. It can be compared to the position of Classical Arabic relative to the various regional vernaculars in Arab lands, or of Latin in medieval Europe. The Romance languages continued to evolve, influencing Latin texts of the same period, so that by the Middle Ages, Medieval Latin included many usages that would have baffled the Romans. The coexistence of Classical Chinese and the native languages of Japan, Korea, and Vietnam can be compared to the use of Latin in countries that natively speak non-Latin-derived Germanic languages or Slavic languages, to the position of Arabic in Persia or the position of the Indic language, Sanskrit, in South India, Southeast Asia, Tibet, China and Indonesia. However, the non-phonetic Chinese writing system causes a unique situation where the modern pronunciation of the classical language is far more divergent (and heterogeneous, depending on the native – not necessarily Chinese – tongue of the reader) than in analogous cases, complicating understanding and study of Classical Chinese further compared to other classical languages.

Christian missionaries coined the term Wen-li (Chinese: 文理; pinyin: wénlǐ; Wade–Giles: wen-li) for Literary Chinese. Though composed from Chinese roots, this term was never used in that sense in Chinese,[4] and was rejected by non-missionary sinologues.[5] 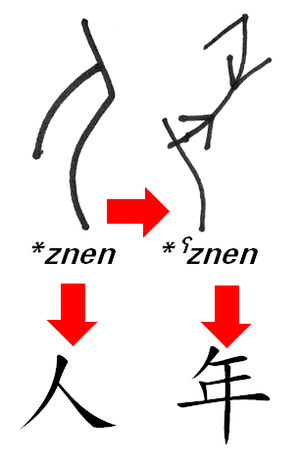 The shape of the Oracle bone script character for "person" may have influenced that for "harvest" (which later came to mean "year"). Today, they are pronounced rén and nián in Mandarin, but their hypothesized pronunciations in Old Chinese were very similar, which may explain the resemblance. For example, in the recent Baxter-Sagart construction, they were /niŋ/ and /nˤiŋ/, respectively, becoming /nʲin/ and /nin/ in Early Middle Chinese.

Chinese characters are not alphabetic and only palely reflect sound changes. The tentative reconstruction of Old Chinese is an endeavor only a few centuries old. As a result, Classical Chinese is not read with a reconstruction of Old Chinese pronunciation; instead, it is always read with the pronunciations of characters categorized and listed in the Phonology Dictionary (韻書; pinyin: yùnshū, "rhyme book") officially published by the Governments, originally based upon the Middle Chinese pronunciation of Luoyang in the 2nd to 4th centuries. With the progress of time, every dynasty has updated and modified the official Phonology Dictionary. By the time of the Yuan Dynasty and Ming Dynasty, the Phonology Dictionary was based on early Mandarin. But since the Imperial Examination required the composition of Shi genre, in non-Mandarin speaking parts of China such as Zhejiang, Guangdong and Fujian, pronunciation is either based on everyday speech as in Cantonese; or, in some varieties of Chinese (e.g. Southern Min), with a special set of pronunciations used for Classical Chinese or "formal" vocabulary and usage borrowed from Classical Chinese usage. In practice, all varieties of Chinese combine these two extremes. Mandarin and Cantonese, for example, also have words that are pronounced one way in colloquial usage and another way when used in Classical Chinese or in specialized terms coming from Classical Chinese, though the system is not as extensive as that of Southern Min or Wu. (See Literary and colloquial readings of Chinese characters)

Japanese, Korean, or Vietnamese readers of Classical Chinese use systems of pronunciation specific to their own languages. For example, Japanese speakers use On'yomi pronunciation when reading the kanji of words of Chinese origin such as 銀行 (ginkoo) or the name for the city of Tokyo (東京), but use Kun'yomi when the kanji represents a native word such as the reading of 行 in 行く (iku) or the reading of both characters in the name for the city of Osaka (大阪), and a system that aids Japanese speakers with Classical Chinese word order.

Since the pronunciation of all modern varieties of Chinese is different from Old Chinese or other forms of historical Chinese (such as Middle Chinese), characters that once rhymed in poetry may not rhyme any longer, or vice versa, which may still rhyme in Min or Cantonese. Poetry and other rhyme-based writing thus becomes less coherent than the original reading must have been. However, some modern Chinese varieties have certain phonological characteristics that are closer to the older pronunciations than others, as shown by the preservation of certain rhyme structures. Some believe Classical Chinese literature, especially poetry, sounds better when read in certain varieties that are believed to be closer to older pronunciations, such as Cantonese or Southern Min, because the rhyming is often lost due to sound shifts in Mandarin.

Another phenomenon that is common in reading Classical Chinese is homophony (words that sound the same). More than 2,500 years of sound change separates Classical Chinese from any modern variety, so when reading Classical Chinese in any modern variety of Chinese (especially Mandarin) or in Japanese, Korean, or Vietnamese, many characters which originally had different pronunciations have become homonyms. There is a famous Classical Chinese poem written in the early 20th century by the linguist Chao Yuen Ren called the Lion-Eating Poet in the Stone Den, which contains only words that are now pronounced [ʂɨ́], [ʂɨ̌], [ʂɨ̀], and [ʂɨ̂] in Mandarin. It was written to show how Classical Chinese has become an impractical language for speakers of modern Chinese because Classical Chinese when spoken aloud is largely incomprehensible. However the poem is perfectly comprehensible when read silently because Literary Chinese, by its very nature as a written language using a logographic writing system, can often get away with using homophones that even in spoken Old Chinese would not have been distinguishable in any way.

Romanizations have been devised giving distinct spellings for the words of Classical Chinese, together with rules for pronunciation in various modern varieties. The earliest was the Romanisation Interdialectique (1931–2) of French Jesuit missionaries Henri Lamasse and Ernest Jasmin, based on Middle Chinese, followed by linguist Wang Li's wényán luómǎzì (1940) based on Old Chinese, and Chao's General Chinese Romanization (1975). However none of these systems has seen extensive use.[7][8]

In terms of conciseness and compactness, Classical Chinese rarely uses words composed of two Chinese characters; nearly all words are of one syllable only. This stands directly in contrast with modern Northern Chinese varieties including Mandarin, in which two-syllable, three-syllable, and four-syllable words are extremely common, whilst although two-syllable words are also quite common within modern Southern Chinese varieties, they are still more archaic in that they use more one-syllable words than Northern Chinese varieties. This phenomenon exists, in part, because polysyllabic words evolved in Chinese to disambiguate homophones that result from sound changes. This is similar to such phenomena in English as the pen–pin merger of many dialects in the American south: because the words "pin" and "pen" sound alike in such dialects of English, a certain degree of confusion can occur unless one adds qualifiers like "ink pen" and "stick pin." Similarly, Chinese has acquired many polysyllabic words in order to disambiguate monosyllabic words that sounded different in earlier forms of Chinese but identical in one region or another during later periods. Because Classical Chinese is based on the literary examples of ancient Chinese literature, it has almost none of the two-syllable words present in modern Chinese varieties.

Classical Chinese has more pronouns compared to the modern vernacular. In particular, whereas Mandarin has one general character to refer to the first-person pronoun ("I"/"me"), Literary Chinese has several, many of which are used as part of honorific language (see Chinese honorifics), and several of which have different grammatical uses (first-person collective, first-person possessive, etc.).[citation needed]

In syntax, Classical Chinese is always ready to drop subjects, verbs, objects, etc. when their meaning is understood (pragmatically inferable). Also, words are not restrictively categorized into parts of speech: nouns used as verbs, adjectives used as nouns, and so on. There is no copula in Classical Chinese, "是" (pinyin: shì) is a copula in modern Chinese but in old Chinese it was originally a near demonstrative ("this"); the modern Chinese for "this" is "這" (pinyin: zhè).

Many final particles (歇語字 xiēyǔzì) and interrogative particles are found in Literary Chinese.[11][12] 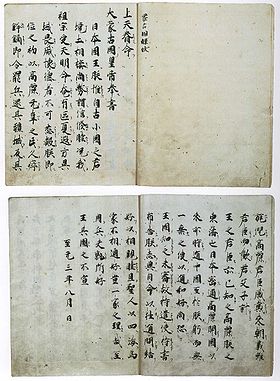 Classical Chinese was used in international communication between the Mongol Empire and Japan. This letter, dated 1266, was sent from Khubilai Khan to the "King of Japan" (日本國王) before the Mongol invasions of Japan; it was written in Classical Chinese. Now stored in Todai-ji, Nara, Japan.

Most government documents in the Republic of China were written in Classical Chinese until reforms in the 1970s, in a reform movement spearheaded by President Yen Chia-kan to shift the written style to vernacular Chinese.[13][14]

Today, pure Classical Chinese is occasionally used in formal or ceremonial occasions. The National Anthem of the Republic of China (中華民國國歌), for example, is in Classical Chinese. Buddhist texts, or sutras, are still preserved in Classical Chinese from the time they were composed or translated from Sanskrit sources. In practice there is a socially accepted continuum between vernacular Chinese and Classical Chinese. For example, most notices and formal letters are written with a number of stock Classical Chinese expressions (e.g. salutation, closing). Personal letters, on the other hand, are mostly written in vernacular, but with some Classical phrases, depending on the subject matter, the writer's level of education, etc. Letters or essays written completely in Classical Chinese today may be considered quaint, old-fashioned or even pretentious by some, but may seem impressive to others.[citation needed]

In addition, many works of literature in Classical Chinese (such as Tang poetry) have been major cultural influences. However, even with knowledge of grammar and vocabulary, Classical Chinese can be difficult to understand by native speakers of modern Chinese, because of its heavy use of literary references and allusions as well as its extremely abbreviated style.