Coats of arms of the Holy See and Vatican City

The coat of arms of Vatican City State, a sovereign entity established by the Lateran Treaty of 11 February 1929, was adopted by the Fundamental Law of the new state on 7 June 1929,[1] and has its coat of arms defined by law as having the golden key in bend and the silver key in bend sinister.[5]

According to the article by Arthur Charles Fox-Davies in the 1910 Catholic Encyclopedia, ecclesiastical heraldry had the same origin and developed contemporaneously with general heraldry, which had become general throughout England, France, Italy and Germany by the end of the 12th century. Ecclesiastical heraldry appears first in seals, nearly all vesica-shaped.[12][13]

Keys and their arrangement

According to Donald Lindsay Galbreath, the earliest blazoning of the arms of the Holy See is that found in Froissart's Chronicles of 1353, which describes them as "gules two keys in saltire argent".[16] Michel Pastoureau states that, in fact, since the beginning of that century the arms of the Holy See had shown this arrangement of two crossed keys, most often with a gold key in bend and a silver in sinister but sometimes with both keys gold or, less often, both keys silver, as described by Froissart.[3]

Galbreath, writing in 1930, says that the practice in use at that time, by which the gold key is placed in bend and the silver in bend sinister, was slow in establishing itself,[4] and John A. Goodall says that only from the time of Pope Pius II is it found with certainty. "The practice of placing a gold key in bend over another in bend sinister of silver is not found with any certainty before the time of Pius II (1458-64)."[17]

In 1952-1953 the English Heraldry Society gave the blazon of the arms of the Holy See as "Gules a key or [("gold" in French)] in bend above a key argent [("silver" in French)] in bend sinister, both wards upwards, the bows united by a cord or, above the shield a tiara, its three crowns or [("gold")], the mitre argent [("silver")].".[18] In his 1978 book, Heraldry in the Catholic Church, Archbishop Bruno Heim described the same arrangement.[19]

The arrangement of the keys in the Holy See's coat of arms as was described in these sources distinguished it from that of Vatican City State by a reversing of the gold and silver keys. 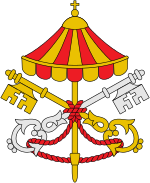 The gold key is placed in bend also in the sede vacante emblem, with the tiara replaced by an umbraculum said to represent the absence of a pope and the temporary governance of the Camerlengo of the Holy Roman Church over the temporal affairs of the Holy See,[20] and in the arms of the Papal States

By the end of Froissart's 14th century the papal tiara is included in the coat of arms of the Holy See according to Galbreath and .[2] and Insegne e simboli: araldica pubblica e privata medievale e moderna.[14] Claudio Ceresa, on the other hand, says the earliest known evidence of its adoption dates from the following century, in the time of Pope Martin V (1417–1431).[21] 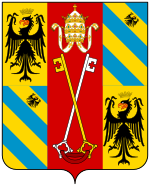 The Montefeltro family arms with the addition of the papal insignia acquired by Federico III as Gonfalonier of the Church.

The distinction between the coat of arms of the papacy and that of the territory ruled by it dates back at least to the 16th century. Galbreath states: "From the 16th century on, this, the third coat of the Papacy — which may be blazoned Gules a pair of keys crossed in saltire, one gold, one silver, tied gold, surmounted by a tiara silver, crowned gold — is taken to represent the Papacy as distinct from the Papal States."[22] This statement is quoted with approval by Heim.[23]

The arms of the Papal States differed in having the umbraculum (the emblem of the Pope's temporal powers) in place of the tiara, and were incorporated as the first quartering of the royal coat of arms of the Napoleonic Kingdom of Italy (1805–1814).[24][25] This coat of arms was not resumed for the territory over which the Pope's temporal powers were restored in 1929 with the creation of Vatican City State.

The holder of the title of Gonfalonier of the Church was entitled to include in his own arms the same design of the crossed keys and umbraculum on a red field.

Charges on the escutcheon

Claudio Ceresa says that the oldest known representation of the crossed keys beneath the papal tiara dates from the time of Pope Martin V (1417–1431), whose successor, Pope Eugene IV (1431–1447), included it in the design of a silver coin.[21][dead link] Galbreath and Insegne e simboli: araldica pubblica e privata medievale e moderna say it is attested from the previous century.[2][14]

The keys refer to the promise of Christ to Peter, "I will entrust to you the keys of the kingdom of heaven. Whatever you declare bound on earth shall be bound in heaven; whatever you declare loosed on earth shall be loosed in heaven."[28] They are a symbol of the power the Catholic Church believes that Christ gave to Saint Peter and his successors,[29] with the gold key signifying that the power reaches to heaven and the silver key that it extends to all the faithful on earth, the interlacing indicating the linking between the two aspects of the power, and the handles of the key being at the base to symbolize the power being in the hands of the pope.[19]

While actual wearing of the Papal tiara has been discontinued by Pope John Paul I and his successors, it remains a papal heraldic symbol. A crown was added to the headgear of the Pope in 1130 to symbolize sovereignty over the Papal States. In 1301, Pope Boniface VIII, at that time in conflict with Philip the Fair of France, added a second crown to indicate that his spiritual authority was superior to any civil power. In 1342, Pope Benedict XII added a third crown to symbolize the superiority of papal religious authority over that of non-religious monarchs. The original significance of the three crowns was lost over time and they came to represent instead the Pope's powers as priest, ruler and teacher.[29]