The Communist Party of Burma (Burmese: ဗမာပြည်ကွန်မြူနစ်ပါတီ; CPB) is the oldest existing political party in Myanmar (also known as Burma). It is currently banned by the government of Myanmar, and operates illegally, often working with insurgent groups along Myanmar's border with China.

The Communist Party of Burma's past leaders were:

On 15 August 1939, a secret meeting was attended by seven men in a small room in Barr Street, Yangon, and the Communist Party of Burma was founded.[2]

The CPB had fought for independence from Great Britain and against the Japanese occupation of Burma in World War II, prior to the eruption of civil conflict in Myanmar.

While in Insein prison in July 1941, Thakin Soe and Than Tun had co-authored the Insein Manifesto, which declared fascism as the major enemy in the coming war and called for temporary co-operation with the British and the establishment of a broad coalition alliance that should include the Soviet Union. It followed the Popular Front line advanced by the Bulgarian communist leader Georgi Dimitrov, at the Seventh Comintern Congress in 1935.

This was against the prevailing opinion of the Dobama Movement, including Thakin Aung San, who had secretly left Myanmar with a group of young men, who later became known as the Thirty Comrades, to receive military training from the Japanese and founded the Burma Independence Army (BIA), later renamed the Burma Defence Army (BDA) and subsequently the Burma National Army (BNA), whom fought Allied Forces.[2][3]

A puppet government was set up during the occupation by the Japanese on 1 August 1943. Soe had gone underground in the Irrawaddy Delta to organize armed resistance soon after the invasion, and Than Tun as Minister of Land and Agriculture was able to pass on intelligence to Soe. Other communist leaders Thakins Thein Pe and Tin Shwe made contact in July 1942 with the exiled colonial government in Simla, India. In January 1944 at a secret meeting near Dedaye in the Delta, the CPB successfully held its First Congress chaired by Soe.

The Communists were in the forefront of the armed resistance which subsequently became a national uprising on 27 March 1945, led by the BNA under the command of General Aung San. The communist commander Bohmu Ba Htoo of the northwest command based in Mandalay started the rebellion three weeks earlier on 8 March. The CPB together with the BNA and the People's Revolutionary Party (PRP, later renamed the Socialist Party), had formed the Anti-Fascist Organisation (AFO) at a meeting in Pegu in August 1944; it was transformed into the Anti-Fascist People's Freedom League (AFPFL) a year later after the defeat of Japan and the return of the British colonial administration to continue the fight for independence. The party that had started with a small group of men now became a major legal political party from 1945 until 1948 when Burma gained independence from Britain.[2][3] 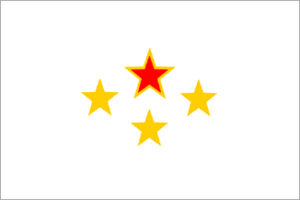 In February 1946 Thakin Soe denounced the leadership, accusing them of Browderism, the form of revisionism espoused by Earl Browder, leader of the American Communist Party, who proposed that armed struggle would no longer be necessary, as world fascism and imperialism had been weakened, making constitutional methods a real option to achieve "national liberation".[3] Thein Pe, who had replaced Soe as secretary general, was the leader responsible for the policy paper on strategy entitled Toward Better Mutual Understanding and Greater Cooperation written in India and adopted at the party's Second Congress at Bagaya Road, Rangoon in July 1945. Soe broke away from the CPB to form a splinter group called the Red Flag Communist Party. The majority remained with Thakins Than Tun and Thein Pe and continued to co-operate with the AFPFL; the main party became known as the White Flag communists although the title has never been officially accepted. During negotiations the British noticed that Than Tun was the thinker behind Aung San as he referred to his brother-in-law repeatedly for his opinion.[2] Also dubbed 'Thein-Than Communists' in the popular press, in the end they failed to achieve 'Leftist Unity' with Aung San and the Socialists led by U Nu and Kyaw Nyein within the AFPFL.

Shortly after Myanmar resigned from the Non-Aligned Movement in protest against Soviet and Vietnamese manipulation at the September 1979 Havana Conference, the Chinese Foreign Minister Huang Hua paid a visit to Rangoon. Ne Win announced an amnesty in 1980 which saw the return of U Nu and others from Thailand. The CPB responded with an attack on Mong Yawng, but proposed talks in September after letting the amnesty expire. The first meeting took place in Beijing in October between the teams led by Ba Thein Tin and Ne Win who paid a surprise visit to China leaving the Kachin delegation in the middle of the talks in Rangoon. At the second meeting headed by Thakin Pe Tint for the CPB and Maj. Gen. Aye Ko for the BSPP the following May in Lashio, three new conditions were put on the table by Aye Ko:

The CPB was told that according to Article 11 of the 1974 Constitution which had established Burma as a one-party state there was no place for another political party. Ne Win ended the peace talks on 14 May and let the ceasefire deadline of 31 May with the KIO pass without replying to the Kachin position. There had been no ceasefire agreement with the CPB.

The VOPB began to broadcast appeals for ending the civil war, developing democracy and building national unity in a new multi-party system. The CPB still commanded 15,000 troops in the north-east, and the Tatmadaw, after resuming the Operation King Conqueror belatedly in 1982 and having suffered losses amounting to several hundred in the Kengtung-Tangyang area from CPB counter-attacks, finally retreated. Both sides now faced another challenge in the rising strength of the National Democratic Front (NDF) formed in 1976, pointedly excluding the Bamar, by the ethnic insurgencies uniting the Karen, Mon, Kachin, Shan,Pa-O, Karenni, Kayan, Wa and Lahu, particularly with the return of the KIO in 1983 after its separate peace talks with the BSPP failed. This finally led to the CPB reaching an agreement with the NDF in 1986.[2]