The Communist Party of Great Britain (Marxist–Leninist) is a Marxist-Leninist and anti-imperialist political party in the United Kingdom, active in England, Scotland, and Wales. Currently their chairman is retired law professor Harpal Brar. The CPGB-ML was created after a split from the Socialist Labour Party (SLP) in 2004. The CPGB-ML publishes the bimonthly newspaper Proletarian, and the Indian Marxist journal Lalkar is also closely allied with the party.

The CPGB-ML was one of few parties in the UK which did not condemn the 2011 England riots, but characterised them as a rudimentary form of anti-capitalist resistance that lacked adequate leadership and direction.[1] The CPGB-ML opposes all immigration controls as measures to misdirect workers and blame each other for the crisis rather than the bourgeoisie.[2][3]

The CPGB-ML is involved in a number of British political movements such as Palestinian solidarity,[5] anti-austerity,[6] antiwar,[7] anti-Maidan,[8] and opposed to the use of drone strikes by the US and NATO against civilians.[9]

The CPGB-ML holds three annual events. The first is the CPGB-ML May Day contingent which marches to Trafalgar Square every year on the 1st of May. The second is the "international BBQ" when the CPGB-ML invites representatives from countries the CPGB-ML supports and people from parties that the CPGB-ML is friendly with. The third annual event held by the CPGB-ML is an October Revolution celebration, which celebrates the first successful Marxist-Leninist revolution and the creation of the USSR.

File:Stalin (1).png
Portrait and quotation of Joseph Stalin carried by the group on May Day celebrations in Trafalgar Square.

The party is known for being the only party to carry a banner of Joseph Stalin, included with a quote by him, every year on the 1st of May International Workers' Day march in London.[10] The quote is from a book Stalin wrote called The Foundations of Leninism and it says: "Either place yourself at the mercy of capital, eke out a wretched existence as of old and sink lower and lower, or adopt a new weapon – this is the alternative imperialism puts before the vast masses of the proletariat. Imperialism brings the working class to revolution."[10][11]

list of Chairman of Communist Party of Great Britain

Shown by default in chronological order of leadership

The CPGB-ML supports governments around the world which it perceives to be socialist or anti-imperialist. Some examples are Venezuela, the Democratic People's Republic of Korea (North Korea), Russia, Cuba, Vietnam, Zimbabwe, Syria, Iran, and People's Republic of China. Delegations from the Chinese embassy have attended meetings of the CPGB-ML and members of the CPGB-ML and Red Youth (the youth wing of the CPGB-ML) have made visits to Ecuador.[12] The party also supports the struggle of the Palestinian people against Zionism in Israel, which it characterises as an apartheid state.[13] It called for a defeat of British troops in Iraq and Afghanistan, and a movement of direct action and non-cooperation among British working people, in order to exert political influence. It was one of many anti-war parties to oppose Nato actions in Libya and Syria, and support the governments of Muammar Gaddafi and Bashar Al Assad. In 2011 the CPGB-ML party chairman Harpal Brar visited Libya (during the war) to express solidarity with the Libyan people in their fight against NATO.[14] However, the Stop the War Coalition expelled the CPGB-ML for its defence of the Libyan and Syrian governments.[15][16]

The CPGB-ML made clear its support of the Democratic People's Republic of Korea (North Korea) and its anti-imperialist stance in April 2013, as well as its opposition to Western efforts to discourage the state from acquiring nuclear weapons.[17][18]

For more details on this topic, see Irish republicanism.

The CPGB-ML calls for the withdrawal of British troops from the island of Ireland and for a unified 32-county state to be formed. It supports Sinn Féin's leadership of the Good Friday Agreement, which it believes falls within this framework.

For more details on this topic, see Scottish independence.

The party accepted a position at its 2012 congress that there are no separate English and Scottish nations, but rather, when those nations were at the point of developing as modern capitalist economies, their ruling classes joined together to form a British nation.[19] Though the CPGB-ML believes in local democracy, it sees the Scottish independence movement as diversionary from building a working class movement across the historic nation of Great Britain and therefore opposes it. It claims that proposals set forward for Scottish independence will not break the Union, the British state, or the British army in any significant manner.[20] In its opposition to Scottish independence, it stands at odds with the Scottish Socialist Party, the Socialist Workers Party and the Revolutionary Communist Group. 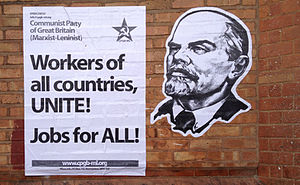 Communist Party of Great Britain (Marxist–Leninist) Poster reading "Workers of all countries, unite!" next to a portrait of Lenin.

The party was founded on July 3, 2004 in London.[21] The party effectively split from the Socialist Labour Party (SLP), because of Arthur Scargill's refusal to accept support for North Korea and other states. As a result, Scargill chose to expel a number of members of the party's central committee and its entire Yorkshire region. Those expelled formed the CPGB-ML. The party also has a small number of members from the early days of the British communist movement and the original Communist Party of Great Britain which was connected to the Third International.

The current Honorary President is Isabel Crook, wife of David Crook, who celebrated her 100th birthday in 2015. Both were communists who were in Spain during the Spanish Civil War and later went to work for Mao Zedong and the Chinese communists.[22][23] Veteran British communist Jack Shapiro, a veteran of the anti-revisionist movement and lifelong communist was a member of the CPGB-ML until his death.[24]

The party's chairman is a retired university law lecturer, writer and businessman Harpal Brar. The party's vice-chairman and international secretary is Ella Rule, while the party's general secretary is Zane Carpenter. The party's honorary president is Isabel Crook, one of the few westeners to take part in the Chinese Communist Revolution.