Communist Party of the Russian Federation

The Communist Party of the Russian Federation (CPRF) (Russian: Коммунистическая Партия Российской Федерации; КПРФ; Kommunisticheskaya Partiya Rossiyskoy Federatsii, KPRF) is a communist party in Russia. The party is often viewed as the immediate successor of the Communist Party of the Soviet Union, which was banned in 1991 by then-President Boris Yeltsin. It is the second largest political party in the Russian Federation, after United Russia. The youth organisation of the party is the Leninist Young Communist League. The party is administered by the Central Committee.

The CPRF was founded at the Second Extraordinary Congress of Russian Communists on 14 February 1993, as the successor organisation of the Communist Party of the Russian Soviet Federative Socialist Republic. As of 1 January 2012, the party has 81 regional divisions and 156,528 members.[1] The areas where the party has a high concentration of supporters are called "the Red Belt".

The party's stated goal is to establish a new, modernised form of socialism in Russia.[4] Immediate goals of the party include the nationalisation of natural resources, agriculture, and large industries within the framework of a mixed economy that allows for the growth of small and medium enterprises in the private sector.[5]

The Communist Party of the Russian Federation was founded on 14 February 1993 at the Second Extraordinary Congress of Russian Communists, where it declared itself to be the successor of the Communist Party of the Russian Soviet Federative Socialist Republic (CPSU).[6] It formed through the merger of a variety of successor groups to the CPSU, including Roy Medvedev's Socialist Party of the Working People (of left-socialist orientation), Alexei Prigarin's Union of Communists, and much of the membership of the Stalinist Russian Communist Workers Party (although party leader Viktor Anpilov rejected the new party.)[7] The CPRF quickly became the largest party in Russia, with 500,000 members soon after its founding, more than double all the other parties membership combined.[8]

Gennady Zyuganov, a co-founder of the party along with senior former Soviet politicians Yegor Ligachev and Anatoly Lukyanov among others, was elected to be party leader at the Second Extraordinary Congress.[9] Zyuganov had been a harsh critic of Alexander Yakovlev, the so-called "godfather of glasnost", on the CPSU Central Committee. After the collapse of the Soviet Union in 1991 he became active in the Russian "national-patriotic" movement,[10][11] being the chairman of the National Salvation Front (some authors call him a nationalist.[12])

Following the CPRF's success in the 1995 legislative election, it emerged as the primary opposition to incumbent President Boris Yeltsin for the 1996 presidential election, whose approval rating was in single digits.[13] In order to oppose Yeltsin, Zyuganov organized a "popular-patriotic bloc" of nationalist organizations to support his candidacy.[13] After the election, on 7 August 1996, the coalition supporting him was transformed into an official organization, the People's Patriotic Union of Russia (NPSR), consisting of more than 30 left-wing and right-wing nationalist organizations, including the Russian All-People's Union, led by Sergey Baburin. Zyuganov was its chairman. It went on to support Zyuganov in the 2000 presidential election. The NPSR was meant to form the basis of a two-party system, with the NPSR opposing the ruling "party of power."[13]

The party suffered a sharp decline in the 2003 legislative election, going from 113 seats to 52. Zyuganov called the 2003 elections a "revolting spectacle", and accused the Kremlin of setting up a "Potemkin party", Rodina, to steal its votes.

The CPRF was endorsed by Sergey Baburin's People's Union for the 2007 Russian parliamentary elections.[14]

In the 2012 Presidential election Zyuganov denounced election irregularities in the 2011 legislative election, but also expressed his opposition to the organizers of the mass demonstrations of December 2011, which he views as orchestrated by ultra liberals who are exploiting unrest. The party played only a minor role in the protests. Party rallies on December 18, 2011 in protest of election irregularities in Moscow and Saint Petersburg were attended by only a few thousand, mostly elderly, party supporters.[15] 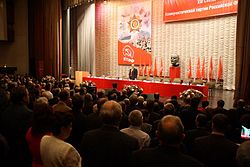 XIII Congress of the Communist Party of the Russian Federation in 2008.

The party's current program was adopted in 2008, where the CPRF declared that it is the only political organization that consistently upholds the rights of the workers and national interests. According to the program, the strategic goal of the party is to build in Russia a "renewed socialism, socialism of the 21st century".[17] The program of the Communist Party declared that the party is guided by Marxism–Leninism, based on the experience and achievements of domestic and world science and culture. According to the party there comes a "confrontation between the New World Order and the Russian people with its thousand-year history, and with its qualities", "communality and great power, deep faith, undying altruism and decisive rejection of lures mercantile bourgeois liberal-democratic paradise".[18]

According to its program,[17] the CPRF considers it necessary to reform the country in three phases. In the first phase, it is needed to achieve workers' power through representation by a coalition led by the CPRF. Achieving this goal will help eliminate the devastation from the standpoint of the party, the consequences conducted in the past decade of reforms, in particular, by the nationalization of property privatized in the 1990s. In this case, however, small producers will remain, and, moreover, will be organized to protect them from robbery by "big business, bureaucrats, and mafia groups". It is planned to reform the management of enterprises through the creation of councils at various levels. The party also plans to transform Russia into a Soviet republic.

In the second stage the role of councils and trade unions will increase even more. The economy will be made a gradual transition to a socialist form of economic activity, however, a small private equity is still retained. Finally, the third phase is to build socialism.

In recent years, the Communist Party of the Russian Federation has also shown tendency of moving towards Dengism. The First Secretary Gennady Zyuganov also expressed that they should learn from China's successful example and build Russian Socialism. He also encouraged all party members to read "Selective work of Deng Xiaoping". He said during his visit to China in 2008: "If we have been learning the successful experience from the Chinese earlier, the Soviet Union would not have dissolved."[19][20]

Under the present conditions in the Russian Federation, the Communist Party believes it is necessary to:[17]

The party is in favour of cooperation with the Russian Orthodox Church.[21] But, according to the words of Zyuganov, the CPRF - is a party of the scientific, but not militant atheism. Prohibited propaganda of any religion inside the party.[22] Unlike the Communist Party of the Soviet Union after 1956, the CPRF celebrates the rule of Joseph Stalin, ignoring the Day of Remembrance of the Victims of Political Repressions automatically.[23][24] The party supported a ban on the "promotion of non-traditional sexual relations to minors",[25][26] mostly named a ban on "homosexual propaganda to minors" in Western media.[27]

Since its founding the CPRF has had several distinct internal factions:[28] 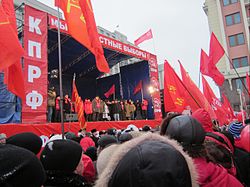 The CPRF is legally registered by the Russian state.[30] In organizational terms, it largely mirrors the CPSU, with the party being led by a Central Committee with a commitment to democratic centralism.[31] It has regional offices in 81 federal subjects.[1] Each regional office is controlled by the regional (oblast, city, etc.) Committee, headed by the First Secretary. The headquarters of the party is in Moscow. The Leninist Komsomol of the Russian Federation is the youth organisation of the party. 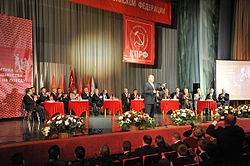 Presentation of electoral associations of the Communist Party of the Russian Federation (CPRF) for the parliamentary elections of 2011.

The current composition of the presidium of the Central Committee of the Communist Party of the Russian Federation, as elected on 24 February 2013:

In 1993 the party founded the Union of Communist Parties – Communist Party of the Soviet Union. Since 2001, the organisation has been led by Gennady Zyuganov and it became part of the Central Committee.

On 19 October 2008 the leader of the party, Gennady Zyuganov, appealed to the citizens of Russia to financially support the party to implement its policy goals.[35][36]

The CPRF is strong in large cities and major industrial and scientific centers ("naukograds"), as well as in the small towns and cities around Moscow.[37] For example, one of the few polling stations that gave a success to the CPRF during the Russian legislative election of 2007 was at Moscow State University.[38] The CPRF is also strong in the far east of Russia, in Siberia and the Urals.[39]

In all presidential elections that have been held in the Russian Federation, the Communist Party's candidate has finished second. In 2012 several opposition politicians, including Boris Nemtsov, claimed that Dmitry Medvedev admitted to them that Zyuganov would actually have won the 1996 election if not for fraud in favor of Yeltsin.[40][41][42] Zyuganov received, according to the official results, 17.18% of the votes in the presidential election of 2012. According to independent observers, there was large-scale fraud in favor of Putin.[43][44] He called the election "one of thieves, and absolutely dishonest and unworthy".[45]

In February 2005 the CPRF defeated the ruling pro-Kremlin party, United Russia, in elections to the regional legislature of Nenets Autonomous Okrug, obtaining 27% of the popular vote.

In the Moscow Duma election held on 4 December 2005 the Party won 16.75% and 4 seats - the best ever result for the CPRF in Moscow. In the opinion of some observers[which?], the absence of the Rodina party contributed to the Communists' success.

On 21 May 2007 the CPRF obtained an important success in the Volgograd's mayoral election. Communist candidate Roman Grebennikov won election as mayor with 32.47% of the vote and became the youngest mayor of a regional capital. In 2008 Roman Grebennikov switched his allegiance to United Russia, angering many communists who accused him of using the CPRF as a tool to become elected.

On 7 April 2011, the CPRF candidate Ilya Potapov won the mayoral election in the town of Berdsk with a landslide victory over the United Russia candidate.

Marxist theoretician Boris Kagarlitsky writes: “It is enough to recall that within the Communist movement itself, Zyuganov's party was at first neither the sole organisation, nor the largest. Bit by bit, however, all other Communist organisations were forced out of political life. This occurred not because the organisations in question were weak, but because it was the CPRF that had received the Kremlin's official approval as the sole recognised opposition.”[47] Andrei Brezhnev, grandson of Soviet leader Leonid Brezhnev, has criticised the CPRF's Zyuganov's rapprochement with the Russian Orthodox Church.[48]