The BeiDou Navigation Satellite System (BDS, simplified Chinese: 北斗卫星导航系统; traditional Chinese: 北斗衛星導航系統; pinyin: Běidǒu wèixīng dǎoháng xìtǒng) is a Chinese satellite navigation system. It consists of two separate satellite constellations – a limited test system that has been operating since 2000, and a full-scale global navigation system that is currently under construction.

The second generation of the system, officially called the BeiDou Navigation Satellite System (BDS) and also known as COMPASS or BeiDou-2, will be a global satellite navigation system consisting of 35 satellites, and is under construction as of January 2015[update]. It became operational in China in December 2011, with 10 satellites in use,[3] and began offering services to customers in the Asia-Pacific region in December 2012.[4] It is planned to begin serving global customers upon its completion in 2020.

According to China daily. Fifteen years after the satellite system was launched, it is now generating $31.5 billion for major companies such as China Aerospace Science and Industry Corp, AutoNavi Holdings Ltd, and China North Industries Group Corp.[5]

The official English name of the system is BeiDou Navigation Satellite System.[6] It is named after the Big Dipper constellation, which is known in Chinese as Běidǒu. The name literally means "Northern Dipper", the name given by ancient Chinese astronomers to the seven brightest stars of the Ursa Major constellation.[7] Historically, this set of stars was used in navigation to locate the North Star Polaris. As such, the name BeiDou also serves as a metaphor for the purpose of the satellite navigation system.

The original idea of a Chinese satellite navigation system was conceived by Chen Fangyun and his colleagues in the 1980s.[8] According to the China National Space Administration, the development of the system would be carried out in three steps:[9]

On 2 November 2006, China announced that from 2008 BeiDou would offer an open service with an accuracy of 10 meters, timing of 0.2 microseconds, and speed of 0.2 meters/second.[12][citation needed]

In February 2007, the fourth and last satellite of the BeiDou-1 system, BeiDou-1D (sometimes called BeiDou-2A, serving as a backup satellite), was sent up into space.[13] It was reported that the satellite had suffered from a control system malfunction but was then fully restored.[14][15]

In April 2007, the first satellite of BeiDou-2, namely Compass-M1 (to validate frequencies for the BeiDou-2 constellation) was successfully put into its working orbit. The second BeiDou-2 constellation satellite Compass-G2 was launched on 15 April 2009.[16] On 15 January 2010, the official website of the BeiDou Navigation Satellite System went online,[17] and the system's third satellite (Compass-G1) was carried into its orbit by a Long March 3C rocket on 17 January 2010.[17] On 2 June 2010, the fourth satellite was launched successfully into orbit.[18] The fifth orbiter was launched into space from Xichang Satellite Launch Center by an LM-3I carrier rocket on 1 August 2010.[19] Three months later, on 1 November 2010, the sixth satellite was sent into orbit by LM-3C.[20] Another satellite, the Beidou-2/Compass IGSO-5 (fifth inclined geosynchonous orbit) satellite, was launched from the Xichang Satellite Launch Center by a Long March-3A on 1 December 2011 (UTC).[21]

In September 2003, China intended to join the European Galileo positioning system project and was to invest €230 million (USD296 million, GBP160 million) in Galileo over the next few years.[22] At the time, it was believed that China's "BeiDou" navigation system would then only be used by its armed forces.[12] In October 2004, China officially joined the Galileo project by signing the Agreement on the Cooperation in the Galileo Program between the "Galileo Joint Undertaking" (GJU) and the "National Remote Sensing Centre of China" (NRSCC).[23] Based on the Sino-European Cooperation Agreement on Galileo program, China Galileo Industries (CGI), the prime contractor of the China’s involvement in Galileo programs, was founded in December 2004.[24] By April 2006, eleven cooperation projects within the Galileo framework had been signed between China and EU.[25] However, the Hong Kong-based South China Morning Post reported in January 2008 that China was unsatisfied with its role in the Galileo project and was to compete with Galileo in the Asian market.[26] 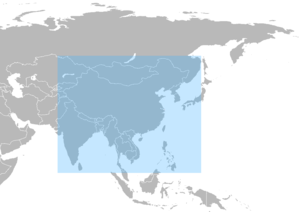 BeiDou-1 is an experimental regional navigation system, which consists of four satellites (three working satellites and one backup satellite). The satellites themselves were based on the Chinese DFH-3 geostationary communications satellite and had a launch weight of 1,000 kilograms (2,200 pounds) each.[32]

Unlike the American GPS, Russian GLONASS, and European Galileo systems, which use medium Earth orbit satellites, BeiDou-1 uses satellites in geostationary orbit. This means that the system does not require a large constellation of satellites, but it also limits the coverage to areas on Earth where the satellites are visible.[10] The area that can be serviced is from longitude 70°E to 140°E and from latitude 5°N to 55°N. A frequency of the system is 2491.75 MHz.[14]

In 2007, the official Xinhua News Agency reported that the resolution of the BeiDou system was as high as 0.5 metres.[33] With the existing user terminals it appears that the calibrated accuracy is 20m (100m, uncalibrated).[34]

According to Sun Jiadong, the chief designer of the navigation system, "Many organizations have been using our system for a while, and they like it very much."[40] 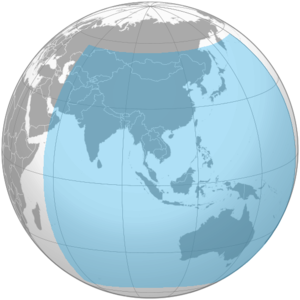 BeiDou-2 (formerly known as COMPASS)[41] is not an extension to the older BeiDou-1, but rather supersedes it outright. The new system will be a constellation of 35 satellites, which include 5 geostationary orbit satellites for backward compatibility with BeiDou-1, and 30 non-geostationary satellites (27 in medium Earth orbit and 3 in inclined geosynchronous orbit),[42] that will offer complete coverage of the globe.

The ranging signals are based on the CDMA principle and have complex structure typical of Galileo or modernized GPS. Similar to the other GNSS, there will be two levels of positioning service: open and restricted (military). The public service shall be available globally to general users. When all the currently planned GNSS systems are deployed, the users will benefit from the use of a total constellation of 75+ satellites, which will significantly improve all the aspects of positioning, especially availability of the signals in so-called urban canyons.[43] The general designer of the COMPASS navigation system is Sun Jiadong, who is also the general designer of its predecessor, the original BeiDou navigation system.

Frequency allocation of GPS, Galileo, and COMPASS; the light red color of E1 band indicates that the transmission in this band has not yet been detected.

There are two levels of service provided — a free service to civilians and licensed service to the Chinese government and military.[18][44] The free civilian service has a 10-meter location-tracking accuracy, synchronizes clocks with an accuracy of 10 nanoseconds, and measures speeds to within 0.2 m/s. The restricted military service has a location accuracy of 10 centimetres,[45] can be used for communication, and will supply information about the system status to the user. To date, the military service has been granted only to the People's Liberation Army and to the Military of Pakistan.[46][47]

Frequencies for COMPASS are allocated in four bands: E1, E2, E5B, and E6 and overlap with Galileo. The fact of overlapping could be convenient from the point of view of the receiver design, but on the other hand raises the issues of inter-system interference, especially within E1 and E2 bands, which are allocated for Galileo's publicly regulated service.[48] However, under International Telecommunication Union (ITU) policies, the first nation to start broadcasting in a specific frequency will have priority to that frequency, and any subsequent users will be required to obtain permission prior to using that frequency, and otherwise ensure that their broadcasts do not interfere with the original nation's broadcasts. It now appears that Chinese COMPASS satellites will start transmitting in the E1, E2, E5B, and E6 bands before Europe's Galileo satellites and thus have primary rights to these frequency ranges.[49]

Although little was officially announced by Chinese authorities about the signals of the new system, the launch of the first COMPASS satellite permitted independent researchers not only to study general characteristics of the signals, but even to build a COMPASS receiver.

Compass-M1 is an experimental satellite launched for signal testing and validation and for the frequency filing on 14 April 2007. The role of Compass-M1 for Compass is similar to the role of the GIOVE satellites for the Galileo system. The orbit of Compass-M1 is nearly circular, has an altitude of 21,150 km and an inclination of 55.5 degrees.

Compass-M1 transmits in 3 bands: E2, E5B, and E6. In each frequency band two coherent sub-signals have been detected with a phase shift of 90 degrees (in quadrature). These signal components are further referred to as "I" and "Q". The "I" components have shorter codes and are likely to be intended for the open service. The "Q" components have much longer codes, are more interference resistive, and are probably intended for the restricted service. IQ modulation has been the method in both wired and wireless digital modulation since morsetting carrier signal 100 years ago.

The investigation of the transmitted signals started immediately after the launch of Compass -M1 on 14 April 2007. Soon after in June 2007, engineers at CNES reported the spectrum and structure of the signals.[50] A month later, researchers from Stanford University reported the complete decoding of the “I” signals components.[51][52] The knowledge of the codes allowed a group of engineers at Septentrio to build the COMPASS receiver[53] and report tracking and multipath characteristics of the “I” signals on E2 and E5B.[54] 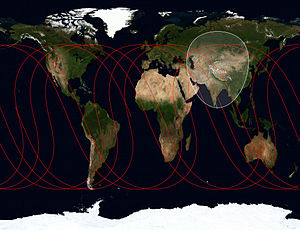 In December 2011, the system went into operation on a trial basis.[55] It has started providing navigation, positioning and timing data to China and the neighbouring area for free from 27 December. During this trial run, Compass will offer positioning accuracy to within 25 meters, but the precision will improve as more satellites are launched. Upon the system's official launch, it pledged to offer general users positioning information accurate to the nearest 10 m, measure speeds within 0.2 m per second, and provide signals for clock synchronisation accurate to 0.02 microseconds.[56]

The BeiDou-2 system began offering services for the Asia-Pacific region in December 2012.[4] At this time, the system could provide positioning data between longitude 55°E to 180°E and from latitude 55°S to 55°N.[57]

In December 2011, Xinhua stated that "[t]he basic structure of the Beidou system has now been established, and engineers are now conducting comprehensive system test and evaluation. The system will provide test-run services of positioning, navigation and time for China and the neighboring areas before the end of this year, according to the authorities."[58] The system became operational in the China region that same month.[3] The global navigation system should be finished by 2020.[59] As of December 2012, 16 satellites for BeiDou-2 have been launched, 14 of them are in service.

The regional Beidou-1 system was decommissioned at the end of 2012.

The first satellite of the second-generation system, Compass-M1 was launched in 2007. It was followed by further nine satellites during 2009-2011, achieving functional regional coverage. A total of 16 satellites were launched during this phase.

In 2015, the system began its transition towards global coverage with the first launch of a new-generation of satellites,[31] and the 17th one within the new system.

On July 25, 2015, the 18th and 19th satellites were successfully launched from the Xichang Satellite Launch Center, marking the first time for China to launch two satellites at once on top of a Long March 3B/Expedition-1 carrier rocket. The Expedition-1 is an independent upper stage capable of delivering one or more spacecraft into different orbits.

The three latest satellites will jointly undergo testing of a new system of navigation signaling and inter-satellite links, and start providing navigation services when ready.