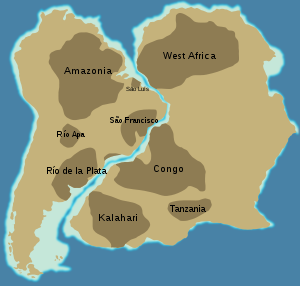 Approximate location of Mesoproterozoic (older than 1.3 Ga) cratons in South America and Africa.

The Congo Craton, covered by the Palaeozoic-to-recent Congo Basin, is an ancient Precambrian craton that with four others (the Kaapvaal, Zimbabwe, Tanzania, and West African Cratons) makes up the modern continent of Africa. These cratons were formed between about 3.6 and 2.0 billion years ago and have been tectonically stable since that time. All of these cratons are bounded by younger fold belts formed between 2.0 billion and 300 million years ago.

The Congo Craton occupies a large part of central southern Africa, extending from the Kasai region of the DRC into Sudan and Angola. It forms parts of the countries of Gabon, Cameroon, and the Central African Republic. A small portion extends into Zambia as well, where it is called the Bangweulu Block.