From Infogalactic: the planetary knowledge core
Jump to: navigation, search
This article is about the private institution in New London, Connecticut. For the public university in Storrs, Connecticut, see University of Connecticut.

Connecticut College (Conn College or Conn) is a private liberal arts college located in New London, Connecticut. Founded in 1911, the mission of the college is to "educate students to put the liberal arts into action as citizens in a global society," and the College's fourth strategic plan (2004) also introduced a set of values statements indicating its commitments to Academic Excellence; Diversity, Equity, and Shared Governance; Education of the Entire Person; Adherence to Common Ethical and Moral Standards; Community Service and Global Citizenship; and Environmental Stewardship.[4] Connecticut College is a primarily residential, four-year undergraduate institution, with nearly all of its approximately 1,900 students living on campus.[5] Students choose courses from 41 majors including an interdisciplinary, self-designed major.[6]

The College has been continuously accredited since 1932 by the New England Association of Schools and Colleges.[7] It is a member of the New England Small College Athletic Conference (NESCAC).

Forbes ranked Connecticut College 84th in its 2014 overall list, 45th in the Northeast and 70th among private colleges.[8] U.S. News & World Report ranked the school 45th among the top liberal arts colleges in 2014.[9] 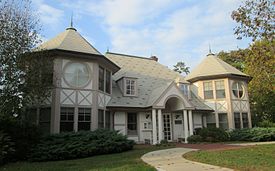 Admissions Building on the Chapel Green 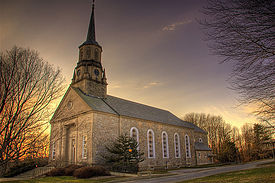 Chartered in 1911, the founding of the college was a response to Wesleyan University's decision to stop admitting women.[10][11] Female Wesleyan alumnae, notably Elizabeth C. Wright, convinced others to found this new college, espousing the increasing desire among women for higher education.[12][13] To that end, the institution was founded – as the Connecticut College for Women. Financial assistance from the city of New London, its residents, and a number of wealthy benefactors gave the college its initial endowment. The land upon which the college sits was a dairy farm owned by Charles P. Alexander of Waterford; after he died in 1904 and his wife, Harriet (Jerome) Alexander died in 1911, their son Frank J. Alexander sold a large part of his parents' farmland to the trustees wishing to found Connecticut College.[14]

According to an October 12, 1935 article in the Hartford Daily Times, marking the College's 20th anniversary: "On September 27, 1915 the college opened its doors to students. The entering class was made up of 99 freshmen students, candidates for degrees, and 52 special students, a total registration of 151. A fine faculty of 23 members had been engaged and a library of 6,000 volumes had been gathered together. It was an auspicious start for this new undertaking."

In a typical year, the college enrolls about 1,900 men and women from 40-45 states, Washington D.C., and 70 countries. Approximately forty percent of students are men. The college is now particularly known for interdisciplinary studies, international programs and study abroad, funded internships, student-faculty research, service learning, and shared governance. Under the college's system of shared governance, faculty, staff, students, and administrators are represented on the major committees that make policy regarding the curriculum, the budget, and the campus and facilities. Students live under the college's 85-year-old student-adjudicated Honor Code and without a Greek system. The Honor Code, which distinguishes Connecticut College from most of its peers, underpins all academic and social interactions at the college and creates a palpable spirit of trust and cooperation between students and faculty. Other manifestations of the code include self-scheduled, unproctored final exams.[15] 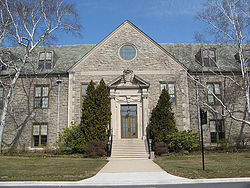 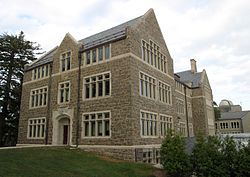 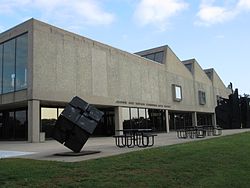 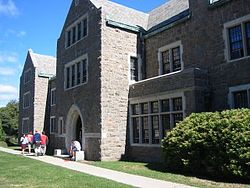 Blackstone House, on the Old Quad 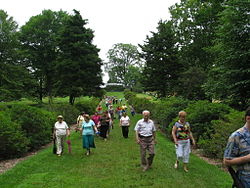 Tourists in the Arboretum

The College offers more than a thousand courses in 29 academic departments and 7 interdisciplinary programs, and students can choose from 41 traditional majors plus opportunities for self-designed courses of study. The 10 most common majors over the last five years have been English, Economics, Psychology, Government, History, Biological Sciences, International Relations, Anthropology, Human Development, and Art.

The main campus has three residential areas. The North Campus contains the newest residential halls: Morrison, Wright, Lambdin, Park, Johnson (formerly Marshall), and Hamilton. The South Campus contains residence halls along the west side of Tempel Green: Harkness, Jane Addams, Freeman, Knowlton, and Windham, across from several academic buildings. The Central Campus contains the oldest residence halls: Burdick, Smith, Larrabee, Plant, Branford, Blackstone, Katharine Blunt, and Lazarus, which is closest to the student center and the library. The oldest dorms on campus are Plant House and Blackstone House which were founded in 1914.[31][32]

There are three libraries on the campus. Shain Library houses a collection of more than 500,000 books and bound periodicals, along with an extensive collection of microforms, computer files, audio and video tapes. The library is home to the Charles Chu Asian Art Reading Room, a space used for studying, public lectures, and receptions. The Greer Music Library in Cummings Arts Center holds books and periodicals about music and musicians, printed music, and numerous recordings.[34]

The Connecticut College Arboretum is a 750-acre (3 km²) arboretum and botanical garden. Students frequently go to the arboretum to walk, study, or otherwise enjoy nature.

Harkness Chapel is a fine example of noted architect James Gamble Rogers' colonial Georgian style, with twelve stained glass windows by G. Owen Bonawit. The building is used for denominational religious services, as well as for ceremonies, concerts and recitals, weddings, and other public functions.[39]

The Lyman Allyn Art Museum is located on campus, although it is not connected to the campus proper. The museum's web site describes it as follows: "Housed in a handsome Neo-Classical building designed by Charles A. Platt, the permanent collection includes over 10,000 paintings, sculpture, drawings, prints, furniture and decorative arts, with an emphasis on American art from the 18th through 20th centuries."[40] 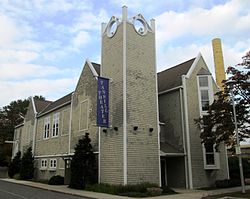 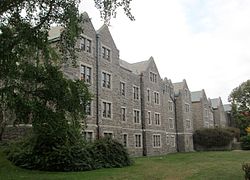