Conrad was the son of the Moravian duke Conrad II of Znojmo (Konrád II. Znojemský) and of the Serbian princess Maria (Marie Srbská), a daughter of Grand Prince Uroš I of Serbia of the Vukanović dynasty. Conrad was grandson of Duke Luitold, the first ruler of the Přemyslid appanage of Znojmo in southern Moravia. Conrad's sister Helen of Znojmo became Polish royal consort by her marriage with High Duke Casimir II the Just.

After the death of his father in 1161, he assumed the rule over the Znojmo principality. In 1173 he occupied the lands of Brno, then controlling more than the half of the Moravian territory (except for Olomouc). When in Summer 1176 he also invaded the region north of the Danube that belonged to Duke Soběslav II of Bohemia he became entangled in the duke's conflict with his rivalling nephew Frederick (Bedřich). Conrad attacked churches and monasteries and was excommunicated by Pope Alexander III.

After Frederick had again obtained the support of Emperor Frederick Barbarossa, Conrad and Duke Leopold V of Austria joined him on his campaign into Moravia and the occupation of Prague in 1178. Frederick was re-installed as Bohemian duke and Conrad expected to be rewarded with Olomouc, however, his hopes were disappointed.

Conrad took the chance of revenge, when he rose against unpopular Frederick in 1182. The duke fled from Prague and only with the emperor's consent was able to retain the Bohemian throne. At the same time, Frederick Barbarossa aimed at weaking his rule: he summoned the adversaries to the Imperial Diet at Regensburg, where he appointed Conrad ruler of the united principalities of Znojmo, Brno and Olomouc, elevated to the "Margraviate of Moravia".

Deliberately or not, these measures only fuelled the internal Přemyslid quarrels. The conflict between the Bohemian and the Moravian branches culminated in a bloody battle at Loděnice on 10 December 1185, after which both sides chose to enter into peace negotiations. Conrad and Frederick met at Knín where the margrave recognised Frederick's suzerainty, in turn was acknowledged as ruler of Moravia by the duke, and obtained the prospect of succeeding him upon his death.

When Frederick died on 25 March 1189, Conrad was made duke with the unanimous support of the Bohemian nobility. He renounced his margravial title in order to unite the Bohemian and Moravian lands under his rule. In May of that year, he received the formal affirmation of the emperor. Conrad assumed an active role in Imperial politics, arbitrating in the conflict around the disputed succession of the Wettin margrave Otto II of Meissen. 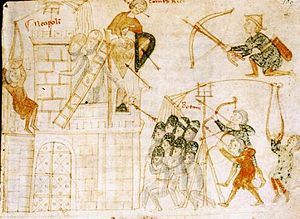 During his short reign in Bohemia, Duke Conrad was beholden to the nobles. He was forced to concede them a set of privileges by the iura Conradi (Czech: Statuta Konrádova), the first Bohemian codex issued at Sadská in 1189. Among the concessions were:

In 1190 Conrad and his mother Maria founded the Premonstratensian Louka Abbey in Znojmo.

Released from the obligation of participating in the Third Crusade, Conrad accompanied Henry VI, the emperor's son, to Southern Italy as part of his attempt to conquer the Kingdom of Sicily from Tancred in right of Henry's wife Constance. On the campaign, Conrad died of the plague in an Imperial military camp near besieged Naples. First buried in Monte Cassino Abbey, his mortal remains were later transferred to Prague.

Conrad's marriage with Hellicha of Wittelsbach remained childless. He was succeeded by Wenceslaus II, a younger brother of late Duke Soběslav II of Bohemia.