From Infogalactic: the planetary knowledge core
Jump to: navigation, search
This article is about the neuroscience of consciousness and death. For beliefs about life after death, see Afterlife. 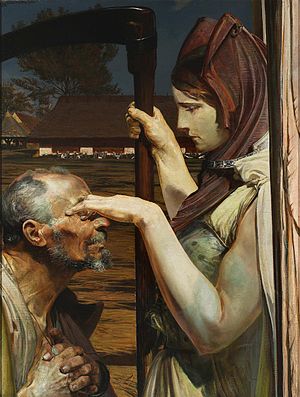 Consciousness after death is a common theme in society and culture in the context of life after death. Scientific research has established that the mind and consciousness are closely connected with the physiological functioning of the brain, the cessation of which defines brain death. However, many people believe in some form of life after death, which is a feature of many religions.

Neuroscience is a large interdisciplinary field founded on the premise that all of behavior and all of the cognitive processes that constitute the mind have their origin in the structure and function of the nervous system, especially in the brain. According to this view, the mind can be regarded as a set of operations carried out by the brain.[1][2][3][4][5]

There are multiple lines of evidence that support this view. They are here briefly summarized along with some examples.

Pharmacological manipulation using various drugs which alter neural activity by interfering with neurotransmission, resulting in alterations in perception, mood, consciousness, cognition, and behavior. Psychoactive drugs are divided into different groups according to their pharmacological effects; euphoriants which tend to induce feelings of euphoria, stimulants that induce temporary improvements in either mental or physical functions, depressants that depress or reduce arousal or stimulation and hallucinogens which can cause hallucinations, perception anomalies, and other substantial subjective changes in thoughts, emotion, and consciousness.
Electrical and magnetical stimulations using various electrical methods and techniques like transcranial magnetic stimulation. In a comprehensive review of electrical brain stimulation (EBS) results obtained from the last 100 years neuroscientist Aslihan Selimbeyoglu and neurologist Josef Parvizi compiled a list of many different subjective experiential phenomena and behavioral changes that can be caused by electrical stimulation of the cerebral cortex or subcortical nuclei in awake and conscious human subjects.[9]
Optogenetic manipulation where light is used to control neurons which have been genetically sensitised to light.

Death was once defined as the cessation of heartbeat (cardiac arrest) and of breathing, but the development of CPR and prompt defibrillation have rendered that definition inadequate because breathing and heartbeat can sometimes be restarted. Events that were causally linked to death in the past no longer kill in all circumstances; without a functioning heart or lungs, life can sometimes be sustained with a combination of life support devices, organ transplants and artificial pacemakers.

It may also be suggested that it is not possible for oneself or one's consciousness to know, understand, define, or conclude that oneself is already dead, especially when volition and perception - as well as speech and action are generally accepted as integral and a prerequisite of knowledge and thought, hence death in an absolute sense is usually declared by a second party other than the deceased[citation needed]. Today, where a definition of the moment of death is required, doctors and coroners usually turn to "brain death" or "biological death" to define a person as being dead; brain death being defined as the complete and irreversible loss of brain function (including involuntary activity necessary to sustain life).[15][16][17][18]

According to the current neuroscientific view, consciousness fails to survive brain death and, along with all other mental functions, is irrecoverably lost.[19]

A near-death experience (NDE) refers to a personal experience associated with impending death, encompassing multiple possible sensations including detachment from the body, feelings of levitation, total serenity, security, warmth, the experience of absolute dissolution, and the presence of a light.[20][21]

Explanatory models for the NDE can be divided into several broad categories, including psychological, physiological, and transcendental explanations.[22][23][24] Research from neuroscience considers the NDE to be a hallucination caused by various neurological factors such as cerebral anoxia, hypercarbia, abnormal activity in the temporal lobes or brain damage,[25] while some NDE researchers in the field of near-death studies advocate for a transcendental[clarification needed] explanation.[26][27]