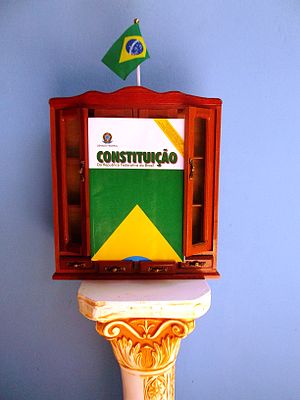 Constitution of the Federative Republic of Brazil 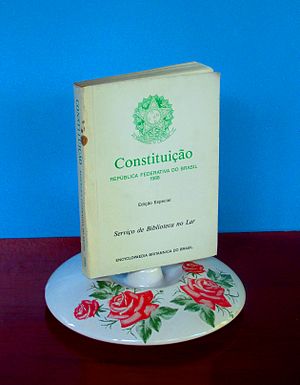 The Constitution of the Federative Republic of Brazil (Portuguese: Constituição da República Federativa do Brasil) is the supreme law of Brazil. It is the foundation and source of the legal authority underlying the existence of Brazil and the federal government of Brazil. It provides the framework for the organization of the Brazilian government and for the relationship of the federal government to the states, to citizens, and to all people within Brazil.

The seventh and current Brazilian Constitution was promulgated on October 5, 1988 after a two-year process in which it was written from scratch.

Main article: History of the Constitution of Brazil

The current Constitution of Brazil was drafted as a reaction to the period of military dictatorship, and sought to guarantee individual rights and restrict the state's ability to limit freedom, to punish offences and to regulate individual life. Among the new constitutional guarantees are the errand of injunction and the habeas data. It also anticipated the existence of a Consumers' Defence Code (enacted in 1990), of a Children's and Youth Code (1990) and of a new Civil Code (2002).

It was the first constitution to demand severe punishment for breaches of civil liberties and rights. Consequently, Brazil later approved a law making the propagation of prejudice against any minority or ethnic group an unbailable crime. This law provided legal remedy against those who spread hate speech or those who do not treat all citizens equally. This second aspect helped disabled people to have a reserved percentage of jobs in the public service and large companies, and Afro-Brazilians to seek reparation for racism in court.

Breaking with the authoritarian logic of the previous Constitution, it made unbailable crimes those of torture and of actions directed against the democratic state and the constitutional order, thus creating constitutional devices to block coups d'état of any kind.

The Constitution also established many forms of direct popular participation besides regular voting, such as plebiscite, referendum and the possibility of ordinary citizens proposing new laws. Examples of these democratic mechanisms were the 1993 plebiscite concerning the form of government, where the presidential system was confirmed, and the 2005 referendum concerning the prohibition of the sale of firearms and ammunition.

The mention of God in the preamble of the Constitution (and later on the Brazilian currency) was opposed by most leftists as incompatible with freedom of religion because it does not recognise the rights of polytheists (like the Amerindians) or atheists. The Supreme Federal Court has ruled that that this omission of the protection of God was not unconstitutional since the preamble of the constitution is simply an indication of principles that serves as an introduction to the constitutional text and reflects the ideological conceptions of the legislator, falling within the scope of political ideology and not of the Law.

The preamble to the Federal Constitution is a brief introductory statement that sets out the guiding purpose and principles of the document. The text reads:[1]

[2] Title 1 is devoted to the fundamental principles of the Republic.

This section comprises the base of the Republic, stating the States, the cities and the Federal District as the indissoluble constituents of the Union. It also establishes three independent, harmonic branches (Executive, Legislative and Judiciary) and lists the nations's main goals.

One of the most important excerpts from this title is in Article 1, single paragraph, stating:

This title establishes Brasília as the Nation's capital, the rights and duties for the Union, the States and the Cities, as well rules for the public staff.

Title 4 disposes about the branches of government.

This chapter describes the attributes for every government branch, and the rules for Amendment to the Constitution as well.

Title 5 regulates the Defense of the State and its Democratic Institutions.

This title rules the deployment of the armed forces, the national security baselines, and declaration of state of siege.

Title 6 comprises the Taxation and the nation's Budget.

Such title disposes on tax distribution among the Union components and their competencies, and the Nation's budget.

Title 7 dictates on the economic and financial order.

Title 7 rules the economic activities in the country, the agricultural and urban policies, as well the state monopolies.

Title 8 disposes about the social order.

Among those, there are sparse regulations, as well as transitional dispositions.