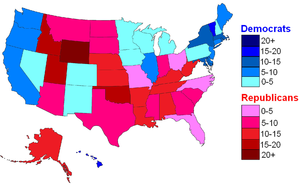 The Cook Partisan Voting Index (Cook PVI) is a measurement of how strongly a United States congressional district leans toward the Democratic or Republican Party, compared to the nation as a whole. The Cook Political Report introduced the PVI in August 1997 to better gauge the competitiveness of each district using the 1992 and 1996 presidential elections as a baseline.[1] The index is based on analysis by the Center for Voting and Democracy (now FairVote) for its July 1997 Monopoly Politics report.[2]

PVIs are calculated by comparing the district's average Democratic or Republican Party's share of the two-party presidential vote in the past two presidential elections to the nation's average share of the same. The national average for 2004 and 2008 was 51.2% Democratic to 48.8% Republican.[1] For example, in Alaska's at-large congressional district, the Republican candidate won 63% and 61% of the two-party share in the 2004 and 2008 presidential elections, respectively. Comparing the average of these two results (62%) against the average national share (49%), this district has voted 13 percentage points more Republican than the country as a whole, or R+13.

Prior to its April 2009 update, the PVI formula was calculated by comparing district-level results for the past two presidential elections to nationwide results for the most recent election. David Nir of the Swing State Project advocated a change to the new formula, and Charlie Cook agreed, wanting an "apples to apples" comparison.[3]

The Cook PVI is formatted as a letter, plus sign, and number:

For districts without a lean, the index written as "EVEN" without a number.