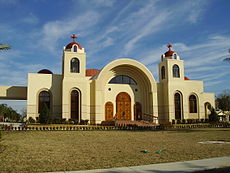 There are many Coptic Orthodox churches and Congregations in the United States. Estimated numbers of adherents, based on church membership, was between 350,000 and 420,000.[7] Based on the estimates of certain Coptic organizations, the number was between 700,000 and one million [7] [7] [8] [9] [10] in the year 2002. Currently, there are over 200 parishes in the United States that serve the expanding Coptic Orthodox population.[8][9] The Church does have a large population when compared to other smaller Christian bodies, yet is among one of the least known Christian Churches and the least known large Orthodox bodies.