From Infogalactic: the planetary knowledge core
Jump to: navigation, search
For the Council of Five Hundred in ancient Athens, see Boule (ancient Greece).

The Council of Five Hundred (Conseil des Cinq-Cents), or simply the Five Hundred was the lower house of the legislature of France during the period commonly known (from the name of the executive branch during this time) as the Directory (Directoire), from 22 August 1795 until 9 November 1799, roughly the second half of the period generally referred to as the French Revolution. 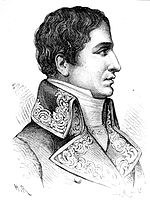 Lucien Bonaparte, the Last President of the Council

Besides functioning as a legislative body, the Council of Five Hundred proposed the list out of which the Ancients chose five Directors, who jointly held executive power.

Each member had to be at least 21 and meet residency qualifications and pay taxes. A third of them would be replaced annually.[1]

Napoleon Bonaparte led a group of grenadiers who drove the Council from its chambers and installed himself as leader of France as its First Consul in the coup of 18 Brumaire.