The County of Loon (Dutch: Graafschap Loon, French: Comté de Looz) was a province of the ancien regime Holy Roman Empire, lying west of the Meuse river in present-day Flemish-speaking Belgium, and east of the old Duchy of Brabant. The most important cities (bonnes villes) of the county were Beringen, Bilzen, Borgloon, Bree, Hamont, Hasselt, Herk-de-Stad, Maaseik, Peer and Stokkem. Its territory corresponded closely to that of the current Belgian province of Limburg. Like other areas which eventually came under the power of the Prince Bishop of Liège, Loon did not become formally linked with the rest of Belgium until the French revolution, but these events also brought the county to an end. Under various new names it first became part of France, and then of the United Kingdom of the Netherlands, before finally joining the new kingdom of Belgium definitively in 1839.

The original centre of this county before it expanded was Borgloon, originally just called Loon, in the southern part of the county. This part of the county is geographically in the hilly Belgian region known as Hesbaye in French or Haspengouw in Dutch. It later expanded northwards into the low-lying Campine or Kempen region which was known as Toxandria in the early Middle Ages. 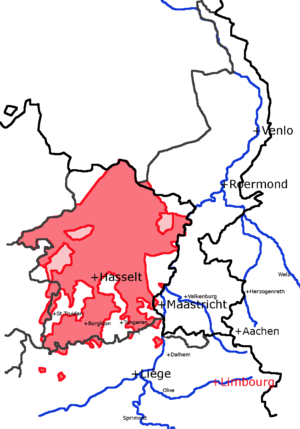 This map shows the medieval County of Loon in red, behind modern provincial borders. The light red zones were under Loon and another lord jointly. 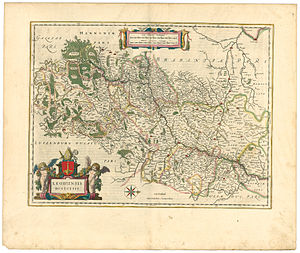 Very little is certain about the origin of the county. Already in Carolingian times there were 4 counties within Haspengouw, mentioned in the treaty of Meersen. Though their names are not known for sure anymore, and it appears that the names and borders of such counties were not very stable, one of them may have been Loon, or a precursor to it. A document of 946 refers to "villa Lens in comitatu Avernas temporibus Rodulphi comitis" which seems to place Loon, still only a villa, in the older county of Avernas, under a count named Rudolph. It was occupied by Goderamnus.

Apart from Avernas, another older Haspengouw county name which seems to have been a predecessor was that of Hocht. All these areas seem to have been under the control of two related groups of families referred to today as the House of Reginar and House of Balderik. The first reference to anyone as a count of Loon is apparently one concerning a man named Otto, referred to in one single document of the Abbey of Saint Truiden.[1]

The first definitely known Count (Dutch graaf, Latin comes, French comte) was named Giselbert, although exactly what territory he held was still uncertain, and his brother Arnulf is also mentioned as a count. In 1016 a charter mentions count Arnulf the brother of count Giselbert. In 1018 a place is mentioned as being "in the pagus Haspengouw in the county of count Giselbert". In 1036 there is mention of "count Giselbert in the territory Haspengouw". In 1040 comes mention of a "county of Haspinga in the pagus Haspengouw", but this time mentioning the brother of Giselbert, Arnulf, leading some to think that Giselbert had died, and his brother had taken over, while others think that the two brothers ruled together during their lifetimes, and some believe they ruled two different parts of Haspengouw.[2][3] 1040 was also when the first clear mention of the county of Loon appeared, with Emperor Henry III treating it as land held under the Prince-Bishopric of Liège.

There are several theories concerning the ancestry of Giselbert and Arnulf, whose brother Balderik II appears to have been archbishop of Liège somewhat earlier, around 1008-1018. It appears from records in Liège that all three were the sons of Otto (or Odo), the above-mentioned earlier Count of Loon; or alternatively of one Rudolf, the earlier count of Avernas, who is thought to have been related to the counts of Betuwe and archbishops of Utrecht, in the modern Netherlands. Or perhaps Rudolf was Otto's father. One of the men in this line also appears to have married Luitgarde, daughter of Albert count of Namur. (One document names her as the wife of Otto, discussed above, another as the mother of Emmo and Otto, discussed below. But this is considered chronologically impossible.)[3][4]

The next generation is again of two brothers, Emmo and Otto, who are thought to be either the sons of Giselbert or Arnold. Emmo became the next count of Loon itself while Otto was count of Duras, in the western part of Haspengouw which also later became part of Loon. There also appears to have been another brother, Herman.[3] The county of Duras, in the southwest of Haspengouw, was held as a fief of the Duchy of Brabant, and was inherited by Otto's son Ghiselbert, and in turn by his son Otto. It eventually because part of Loon, under Count Gerard around 1194.

In 1106 Count Arnold I, the son of Emmo, was able to strengthen his position, when he acquired the possessions of the extinct Counts of Rieneck through his marriage. The enduring conflict with the Liège overlords culminated in an 1179 campaign by Prince-Bishop Rudolf of Zähringen, whose troops devastated the county's capital at Borgloon (Loon Castle, French name: Looz). Around 1200 the residence was moved to Kuringen near the town of Hasselt.

The son and heir of Arnold I was Louis (or Lodewijk) I. He founded Averbode Abbey by charter dated 1135, and was count of Loon, Stadtgraf of Mainz, and count of Rieneck. He added Brustem and Kolmont to the territory of Loon, donating charters of freedom in return.

Count Gerard II, the next count of Loon and Rieneck, moved the seat of the count to Kuringen, which is today in Hasselt. In 1190 he also inherited the county of Duras from his relatives, but had to accept Brabant's suzerainty over that territory for the time being. This area gave power over church land in Sint-Truiden, Halen, and Herk de Stad, effectively defining what is today still the southwestern border of Belgian Limburg. His son Gerard III was heir, and he in turn passed Loon to Arnold IV, but Rieneck to another son, Louis.

Count Arnold IV by marriage acquired the County of Chiny in 1227, and brought the main line of the counts of Loon to the high point of its territorial expansion. The comital line became extinct with the death of Louis VI of Loon in 1336 and the Loon and Chiny estates were at first inherited by the noble House of Sponheim at Heinsberg with the consent of the Liège bishop. In 1362 Prince-Bishop Engelbert III of the Marck nevertheless seized Loon and finally incorporated it into the Liège territory in 1366.

The county remained a separate entity (quartier) within Liège, whose prince-bishops assumed the comital title. When the bishopric was annexed by Revolutionary France in 1795, the county of Loon was also disbanded and became part of the département of Meuse-Inférieure, along with Dutch Limburg to the east of the Meuse. After the defeat of Napoleon, the département became part of the new United Kingdom of the Netherlands in 1815, and received its modern name of Limburg as a way for the kingdom to preserve the old title of the medieval Duchy of Limburg, which was nearby. However, in 1830, Belgium was created, splitting the Kingdom, and the position of Limburg became a cause of conflict between the two resulting Kingdoms. In 1839 it was finally decided to split Limburg into its two modern parts. The western part, corresponding to the old County of Loon, became part of Belgium, but kept its new name of Limburg.

Coat of arms of Looz and Chiny