From Infogalactic: the planetary knowledge core
Jump to: navigation, search
For the later history of Savoy, see Duchy of Savoy.

The County of Savoy (French: Comté de Savoie, Italian: Contea di Savoia) was a State of the Holy Roman Empire which emerged, along with the free communes of Switzerland, from the collapse of the Burgundian Kingdom of Arles in the 11th century. 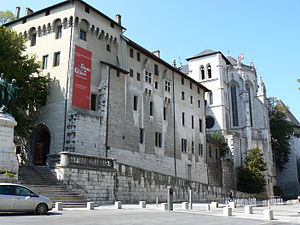 Sapaudia, stretching south of Lake Geneva from the Rhône River to the Western Alps, had been part of Upper Burgundy ruled by the Bosonid duke Hucbert from the mid 9th century. Together with the neighboring Free County of Burgundy (Franche Comté) it became part of the larger Kingdom of Arles under King Rudolph II in 933.

Humbert the White-Handed was raised to count by the last King of Arles, Rudolph III, in 1003. He backed the inheritance claims of the emperor Henry II and in turn was permitted to usurp the county of Aosta from its bishops at the death of Anselm. Following his support of Conrad II in annexing Arles upon Rudolph's death and suppressing the revolts of Count Odo and Bishop Burchard, he also received the county of Maurienne (formerly held by the archbishops of Vienne) and territories in Chablais and Tarentaise, formerly held by its archbishops at Moûtiers.

While the Arelat remained a titular kingdom of the Holy Roman Empire, Humbert's descendants—later known as the House of Savoy—maintained their independence as counts. In 1046, his younger son Otto married Adelaide, daughter of Ulric Manfred II, marquis of Susa. When she inherited her father's lands in preference to other male relatives,[1] he thereby acquired control of the extensive March of Turin. This was then united with Savoy upon his inheritance from his elder brother.

The counts further enlarged their territory when, in 1218, they inherited the Vaud lands north of the Lake Geneva from the extinct House of Zähringen. In 1220, Count Thomas I occupied the towns of Pinerolo and Chambéry (Kamrach), which afterwards became the Savoy capital. In 1240, his younger son Peter II was invited to England by King Henry III, who had married Peter's niece Eleanor of Provence. He was appointed Lord Warden of the Cinque Ports and Earl of Richmond and had the Savoy Palace erected at London.

In 1313, Count Amadeus V the Great officially gained the status of Imperial immediacy from the hands of Emperor Henry VII of Luxembourg. The superordinated Kingdom of Arles effectively ceased to exist, after the Dauphiné had passed to the French crown prince Charles V of Valois in 1349 and the "Green Count" Amadeus VI of Savoy was appointed Imperial vicar of Arelat by Emperor Charles IV of Luxembourg in 1365.

The "Red Count" Amadeus VII gained access to the Mediterranean Sea by the acquisition of the County of Nice in 1388, his son Amadeus VIII the Peaceful purchased the County of Geneva in 1401. The extended Savoy lands were finally raised to a duchy in 1416 by the German king Sigismund of Luxembourg (see Duchy of Savoy 1416–1718).

In 1416 Amadeus VIII was raised to the status of Duke of Savoy.