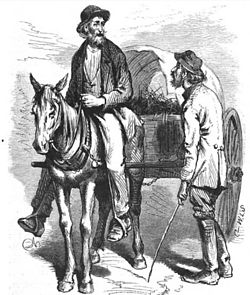 "A pair of Georgia crackers" as depicted by illustrator James Wells Champney in The Great South by Edward King, 1873

Cracker, sometimes white cracker or cracka, is a derogatory term for white people,[1] especially poor rural whites in the Southern United States. In reference to a native of Florida or Georgia, however, it is sometimes used in a neutral or positive context or self-descriptively with pride (see Florida cracker and Georgia cracker).[2]

The term "cracker" was in use by the 1760s, specifically applied to the Scots-Irish settlers of the southern backcountry in colonial America.[3]

It is probably derived from the verb to crack used in the sense "to boast" (as in not what it's cracked up to be) in Elizabethan times, documented in Shakespeare's King John (1595): "What cracker is this same that deafs our ears with this abundance of superfluous breath?"[4][5] This sense of cracker, used to describe loud braggarts, persisted especially in Hiberno-English and it, and its Gaelicized spelling craic, are still in use in Ireland, Scotland and Northern England.[6] This explanation is given in the earliest recorded reference to the term in the specific meaning under discussion here, in a letter dated 27 June 1766 by one G. Cochrane (in some sources identified as being addressed to the Earl of Dartmouth):

I should explain to your Lordship what is meant by Crackers; a name they have got from being great boasters; they are a lawless set of rascalls on the frontiers of Virginia, Maryland, the Carolinas, and Georgia, who often change their places of abode.[3]

The compound corn-cracker was used of poor white farmers (by 1808), especially of Georgians, but also extended to residents of northern Florida, from the cracked kernels of corn which formed the staple food of this class of people. This possibility is cited in the 1911 edition of Encyclopedia Britannica,[7] but the Oxford English Dictionary ("cracker", definition 4) says a derivation of the 18th-century simplex cracker from the 19th-century compound corn-cracker is doubtful.

An alternative derivation proposes the cracking of whips by cattle-drivers, forwarded by Thornton, An American Glossary (1912)[8][9]

The whips used by some of these people are called 'crackers', from their having a piece of buckskin at the end. Hence the people who cracked the whips came to be thus named.

This is the explanation given in the context of the Florida Cracker Trail by the Florida Center for Instructional Technology, website (2002).[10]

Glossaries of African-American slang of the 1990s record the popular etymology associating the term with bullwhips used to punish African slaves, with such use of the whip being described as "cracking the whip".[11] 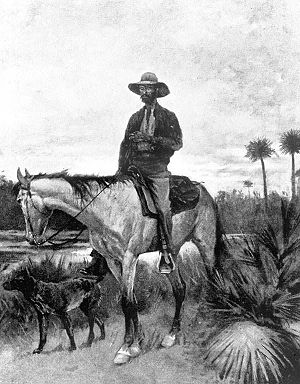 A "cracker cowboy" with his Florida Cracker Horse and dog by Frederick Remington, 1895

Frederick Law Olmsted, a prominent landscape architect from Connecticut, visited the South as a journalist in the 1850s and wrote that "some crackers owned a good many Negroes, and were by no means so poor as their appearance indicated."[12]

In On the Origin of Species Charles Darwin quotes a Professor Wyman as saying, "one of the 'crackers' (i.e. Virginia squatters) added, 'we select the black members of a litter for raising, as they alone have a good chance of living.'"

Singer-songwriter Randy Newman, on his socio-politically themed album Good Old Boys (1974) uses the term "cracker" on the song "Kingfish" ("I'm a cracker, You one too, Gonna take good care of you"). The song's subject is Huey Long, populist Governor and then Senator for Louisiana (1928–1935). The term is also used in "Louisiana 1927" from the same album, where the line "Ain't it a shame what the river has done to this poor cracker's land" is attributed to President Coolidge.

In the 1972 film, Deliverance, Burt Reynolds' character Lewis Medlock refers to the backwoods Appalachians as "crackers."

"Cracker" has also been used as a proud or jocular self-description. With the huge influx of new residents from the North, "cracker" is used informally by some white residents of Florida and Georgia ("Florida cracker" or "Georgia cracker") to indicate that their family has lived there for many generations. However, the term "white cracker" is seldom used self-referentially and remains a slur used to demean Caucasians, typically in contexts of privilege or oppressive behavior.[13]

In 1947, the student body of Florida State University voted on the name of their athletic symbol. From a list of more than 100 choices, Seminoles was selected. The other finalists, in order of finish, were Statesmen, Rebels, Tarpons, Fighting Warriors, and Crackers.[14][15]

Crackin' Good Snacks (a division of Winn-Dixie, a Southern grocery chain) has sold crackers similar to Ritz crackers under the name "Georgia Crackers". They sometimes were packaged in a red tin with a picture of The Crescent, an antebellum plantation house in Valdosta, Georgia.

Before the Milwaukee Braves baseball team moved to Atlanta, Georgia, the Atlanta minor league baseball team was known as the "Atlanta Crackers". The team existed under this name from 1901 until 1965. They were members of the Southern Association from their inception until 1961, and members of the International League from 1961 until they were moved to Richmond, Virginia in 1965. However, it is suggested[who?] the name was derived from players "cracking" the baseball bat and this origin makes sense when considering the Atlanta Negro League Baseball team was known as the "Atlanta Black Crackers".

"Cracker" has been used as a pejorative for White American (rather than specifically for poor or rural white southerners) used in Black nationalism since the 1960s Civil Rights Movement, and more frequently as an insult in rap lyrics and in the context of race-related unrest and controversy since the 2000s.

In his 1964 speech "The Ballot or the Bullet", Malcolm X used the term "cracker" in reference to white people in a pejorative context.[16] In one passage, he remarked, "It's time for you and me to stop sitting in this country, letting some cracker senators, Northern crackers and Southern crackers, sit there in Washington, D.C., and come to a conclusion in their mind that you and I are supposed to have civil rights. There's no white man going to tell me anything about my rights."[16]

On November 29, 1993, in a speech given at Kean College in New Jersey, Nation of Islam spokesman Khallid Abdul Muhammad called Pope John Paul II "a no good cracker".[17]

Rapper Snoop Dogg boasts he “...make money off crackers;” in the song "Go to Church” (2006) by Ice Cube produced by Lil Jon. In the video, directed by Marcus Raboy, the slur is not censored. Rapper and actor Ice Cube says the word cracker three times in a song about killing white people called “Enemy.” The following is one example of his use of the racial slur, “Sent me a subpoena because I kill more crackers than Bosnia Herzegovina.”

In 2008, former President Bill Clinton used the term "cracker" on Larry King Live to describe white voters he was attempting to win over for Barack Obama: "You know, they think that because of who I am and where my politic[al] base has traditionally been, they may want me to go sort of hustle up what Lawton Chiles used to call the 'cracker vote' there."[18]

On June 27, 2013, in the trial of George Zimmerman, concerning the shooting of Trayvon Martin, the term "cracker" was mentioned in courtroom testimony. A witness under examination testified that Martin said (on the phone) to her that a "creepy ass cracker is following me" minutes before the altercation between Martin and Zimmerman occurred. Zimmerman's attorney then asked the black witness if that was an offensive term, to which the witness responded "no". That testimony and response brought about both media and public debate about the use of the word "cracker". A CNN report referenced the regional nature of the term, noting that cracker is regarded as a "sharp racial insult that resonates with white southerners even if white northerners don't get it."[23] MSNBC hosts went on to say that Rachel Jeantel was just speaking "Black English".