From Infogalactic: the planetary knowledge core
Jump to: navigation, search
This article is about the geological feature. For the lake of the same name in Oregon, see Crater Lake. For other uses, see Crater Lake (disambiguation).
Not to be confused with lava lakes, a rare phenomenon where a volcanic crater can sustainably contain a significant volume of molten lava. 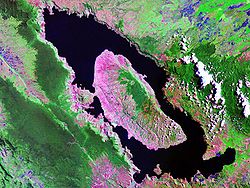 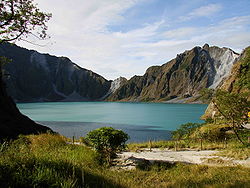 Lake Pinatubo, Philippines, formed after the 1991 eruption of Mount Pinatubo. 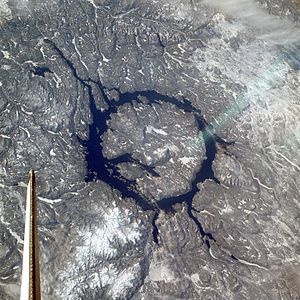 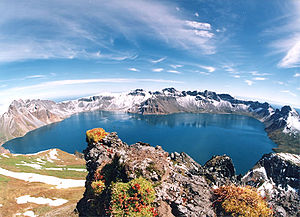 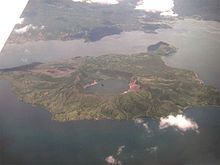 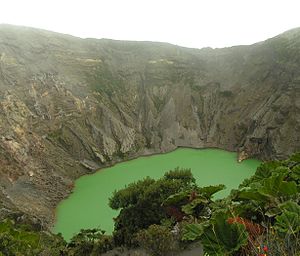 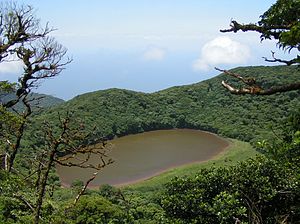 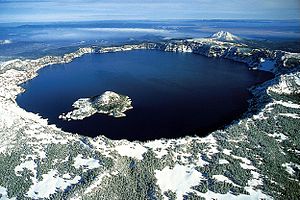 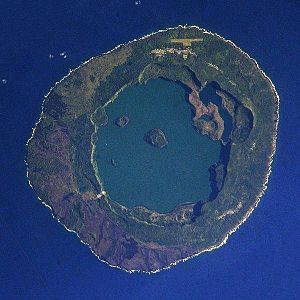 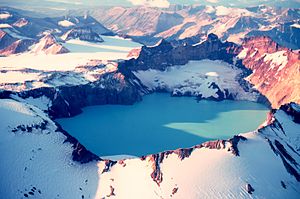 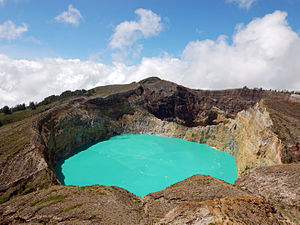 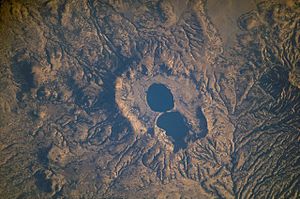 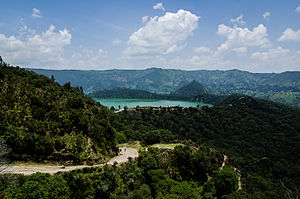 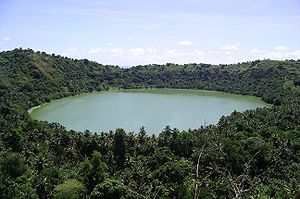 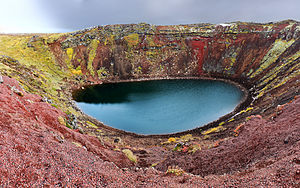 A crater lake is a lake that forms in a volcanic crater or caldera, such as a maar; less commonly and with lower association to the term a lake may form in an impact crater caused by a meteorite, or in an artificial explosion caused by humans. Sometimes lakes which form inside calderas are called caldera lakes, but often this distinction is not made. Crater lakes covering active (fumarolic) volcanic vents are sometimes known as volcanic lakes, and the water within them is often acidic, saturated with volcanic gases, and cloudy with a strong greenish color. For example, the crater lake of Kawah Ijen in Indonesia has a pH of under 0.5.[1] Lakes located in dormant or extinct volcanoes tend to have fresh water, and the water clarity in such lakes can be exceptional due to the lack of inflowing streams and sediment.

Crater lakes form as the created depression, within the crater rim, is filled by water. The water may come from precipitation, groundwater circulation (often hydrothermal fluids in the case of volcanic craters) or melted ice. Its level rises until an equilibrium is reached between the rates of incoming and outgoing water. Sources of water loss singly or together may include evaporation, subsurface seepage, and, in places, surface leakage or overflow when the lake level reaches the lowest point on its rim. At such a saddle location, the upper portion of the lake is contained only by its adjacent natural volcanic dam; continued leakage through or surface outflow across the dam can erode its included material, thus lowering lake level until a new equilibrium of water flow, erosion, and rock resistance is established. If the volcanic dam portion erodes rapidly or fails catastrophically, the occurrence produces a breakout or outburst flood. With changes in environmental conditions over time, the occurrence of such floods is common to all natural dam types.

A well-known crater lake, which bears the same name as the geological feature, is Crater Lake in Oregon. It is located in the caldera of Mount Mazama. It is the deepest lake in the United States with a depth of 594 m (1,949 ft). Crater Lake is fed solely by falling rain and snow, with no inflow or outflow at the surface, and hence is one of the clearest lakes in the world.[2]

Due to their unstable environments, some crater lakes exist only intermittently. Caldera lakes in contrast can be quite large and long-lasting; for instance, Lake Toba (Indonesia) formed after its eruption around 70,000 years ago and has an area of over 1,000 km2. While many crater lakes are picturesque, they can also be deadly. Gas discharges from Lake Nyos (Cameroon) suffocated 1,800 people in 1986, and crater lakes such as Mount Ruapehu's (New Zealand) often contribute to destructive lahars.

Certain bodies of water, although their formation is directly related to volcanic activity, are not usually referred to as crater lakes, including:

Other kinds of crater lakes

Lakes can also fill impact craters, but these are not usually referred to as crater lakes except in a few isolated cases. Example of such impact crater lakes include Manicouagan in Canada, Lake Bosumtwi in Ghana and Siljan in Sweden.

More rarely they can also fill craters caused by artificial explosions, such as the radioactive Lake Chagan in Kazakhstan.

Other geological features that can be mistaken for a crater lake

Some geomorphological features, when filled with water, can sometimes be confused with crater lakes:

Some circular open-pit mines can also present a similar appearance, such as Big Hole in Kimberley, South Africa, a diamond mine (in a kimberlite pipe) where water has accumulated in the artificially created depression.