The Croatian People's Peasant Party (Hrvatska pučka seljačka stranka) was formed on December 22, 1904 by Antun Radić along with his brother Stjepan Radić. It contested elections for the first time in the Kingdom of Croatia-Slavonia in 1906 winning no seats. Despite this, they posted gains in subsequent elections. In 1908 the party won two seats, and in 1910 and 1911 nine seats. While Croatia was still under the rule of Budapest and Vienna, the HSS sought for greater autonomy, peasants' rights and land reform.

After World War I and the dissolution of Austria-Hungary, the HSS garnered significant popular and electoral support for its advocacy of an independent Croatian state, and its opposition to the creation of the Kingdom of Serbs, Croats and Slovenes (which actually meant joining together the State of Serbs, Croats and Slovenes with the Kingdom of Serbia) which the party claimed would be dominated by Serbia.

Despite the party's efforts, the kingdom was established, and the HSS became an opposition party in parliament. Although popular among its constituency, the party's weakness was its limited national appeal and its ethnic and economic-based constituency.

The HSS advocated a federal state in which Croatia would be afforded equal status vis-à-vis Serbia, and the party platform still called for greater Croatian autonomy and eventually independence. With that goal in mind, the HSS renamed itself the Croatian Republican Peasant Party until the royal authorities forced the party to remove the word "Republican" in 1925 because of its anti-royalist connotation.

In the early 1920s the Yugoslav government of prime minister Nikola Pašić used political and police pressure over voters and ethnic minorities, confiscation of opposition pamphlets[2] and other measures of election rigging to keep the opposition, mainly the Croatian Peasant Party and its allies, in minority in Yugoslav parliament.[3] Pasic believed that Yugoslavia should be as centralized as possible, creating in place of distinct regional governments and identities a Greater Serbian national concept of concentrated power in the hands of Belgrade.[4] 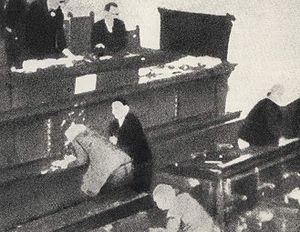 As the opposition, the party's strategy was to boycott parliamentary sessions which not only allowed Serb politicians to further consolidate power, it also created political instability and hostility. On June 20, 1928, Puniša Račić, a Serbian ultra-nationalist, was offended by a comment made by HSS deputies during a parliamentary session, shot and mortally wounded Radić and several other HSS deputies on the chamber floor. King Alexander subsequently proclaimed a royal dictatorship on January 6, 1929. Soon after the country was renamed the Kingdom of Yugoslavia and all political parties were banned.

Some political freedoms were restored in 1931 and the HSS, led by Vladko Maček, once again was in opposition. Maček showed great organisational abilities and political skill, which resulted in HSS gathering support from all classes of Croatian people, as well from followers of almost any ideology. HSS also became umbrella for almost all opposition party in Kingdom of Yugoslavia. Although HSS-led coalition lost 1938 elections, it remained force to be reckoned with and in August 1939 Cvetković-Maček agreement led to creation of semi-autonomous Banovina of Croatia under HSS rule. At the same time, HSS returned to royal government. Ivan Šubašić of the HSS became head of the Banovina as ban.

The party's fortunes declined precipitously with the outbreak of World War II and the German invasion in April 1941. Some party members were divided among those who sympathized with the Croatian fascist Ustasha independence movement, and those whose left-leaning beliefs led them to join the Partisans. But the vast majority of HSS supporters remained passive and neutral for the duration of the war as the Ustasha, the communist Partisans and the royalist Chetniks fought for control.

After the communist victory, the Communist Party of Yugoslavia established one-party rule — the HSS, along with other political parties were declared illegal.[citation needed] In 1947, HSS joined the International Peasants' Union. Maček represented the HSS in exile until his death in 1964. Juraj Krnjević took over as leader until his own death 1988, only a year before the HSS could resume its work within Croatia.

With the advent of multi-party system in 1990, the HSS was reconstituted and on the 1990 election won several seats in the Croatian Parliament. They remained in opposition until the 2000 elections when they received three ministerial portfolios as part of their participation in the winning Social Democratic Party of Croatia-led coalition.

On elections 2000 HSS led center coalition alongside with IDS-HNS-LS and Coalition won 25 seats in parliament with 17 seats for HSS (16 domestic and one minority seat). After the elections HSS formed coalition with SDP and had tree ministers in government (education,agriculture and entrepreneurship), vice president of government and Speaker of Croatian Parliament, Zlatko Tomčić.

On local elections 2001. HSS achieved its best results ever and won 8 out of 21 county prefects (župan) and lot of municipalities and towns and became party which was second in number of local elected officials.

Today, the HSS considers itself among other center European political parties that advocate pro-agrarian policies and greater economic interventionism by the state. On social matters the HSS is largely conservative, supporting a Christian-based morality in public life. HSS is an associate member of the European People's Party (EPP).

Before the 2007 parliamentary elections, HSS announced a coalition with opposition parties Alliance of Primorje-Gorski Kotar and Croatian Social Liberal Party. The coalition received 6.5% of the popular vote and 8 out of 153 seats (six for HSS itself). After elections they became part of Ivo Sanader's governing coalition and received two ministerial portfolios (regional development and tourism),vicepresident of government and vicepresident od Parliament.

On 2011 parliamentary elections party score worst result in party's history receiving only one parliamentary seat and 3% of popular vote.

The following is a summary of HSS's results in parliamentary elections for the Croatian parliament. The "Total votes" and "Percentage" columns include sums of votes won by pre-election coalitions HSS had been part of. After preferential votes were introduced into the electoral system, the total votes column includes the statistic of the sum of votes given to HSS candidates on the coalition lists. The "Total seats" column includes sums of seats won by HSS in election constituencies plus representatives of ethnic minorities affiliated with HSS.

The following is a list of presidential candidates who were endorsed by HSS.