The word "kuna" means "marten" in Croatian since it is based on the use of marten pelts as units of value in medieval trading. The word lipa means "linden (lime) tree".

During Roman times, in the provinces of upper and lower Pannonia (today Hungary and Slavonia), taxes were collected in the then highly valued marten skins. Hence, the Croatian word "marturina" or tax, derived from the Latin word "martus" (Croatian: "kuna"). The kuna was a currency unit in several Slavic states, most notably Kievan Rus and its successors until the early 15th century. It was equal to ​1⁄25 (later ​1⁄50) gryvna of silver.

It has no relation to the various Slavic currencies named "koruna" (translated as kruna in Croatian) which means "crown".

In the Middle Ages, many foreign monies were used in Croatia, but since at least 1018 a local currency was in use. Between 1260 and 1380, Croatian Viceroys issued a marten-adorned silver coin called the banovac.[2][3] However, the diminishing autonomy of Croatia within the Croatian-Hungarian Kingdom led to the gradual disappearance of that currency in the 14th century.

The idea of a kuna currency reappeared in 1939 when Banovina of Croatia, an autonomous province established within Kingdom of Yugoslavia, planned to issue its own money.[4] In 1941, when the Ustaše regime formed the Independent State of Croatia, they introduced the Independent State of Croatia kuna.[4] This currency remained in circulation until 1945, when it – along with competing issues by the communist Partisans – disappeared with the establishment of FPR Yugoslavia and was replaced by the Yugoslav dinar.[5]

The modern kuna was introduced on May 30, 1994, starting a transitional period from Croatian dinar, ending on December 31, 1994.[6] The exchange rate between dinar and kuna was 1 kuna = 1,000 dinars. Since then, Croatia has been in a system of de facto currency board with a fixed exchanged rate. The kuna was pegged to the German mark from the start. With the replacement of the Deutsche Mark by the euro, the kuna's peg effectively switched to the euro.

The choice of the name kuna was controversial because the same currency name had been used by the Independent State of Croatia kuna, but this was dismissed as a red herring, since the same name was also in use during the Banovina of Croatia and by the ZAVNOH.[5] An alternative proposition for the name of the new currency was kruna (crown), divided into 100 banica (viceroy's wife), but this was deemed too similar to the Austro-Hungarian krone and found inappropriate for the country which is a republic.[5] The transition to the new currency went smoothly and the controversy quickly blew over.

The self-proclaimed Serbian entity Republic of Serbian Krajina did not use the kuna or the Croatian dinar. Instead, they issued their own Krajina dinar until the region was reintegrated into Croatia in 1995.

The main reference currency for kuna was the German mark, and later the euro. A long-time policy of the Croatian National Bank has been to keep the fluctuations of the kuna exchange rate with the euro in a relatively stable range. The country joined the European Union on 1 July 2013 and it plans to join the European Monetary System.[7][8] Kuna is expected to be replaced by the euro within two or three years after joining the European Union.[8]

In 1994,[6] coins were introduced in denominations of 1, 2, 5, 10, 20 and 50 lipa (Croatian word for linden or tilia tree), 1, 2, 5 and 25 kuna. The coins are issued in two versions: one with the name of the plant or animal in Croatian (issued in odd years), the other with the name in Latin (issued in even years). Overall more coins have been minted with Croatian names than with names in Latin.[9]

Due to their low value, 1 and 2 lipa coins are rarely used. The Croatian National Bank stated in 2001 that it had no plans for withdrawing the 1, 2 and 5 lipa coins.[10]

Commemorative coins have been issued since 1994.

These notes were designed by Miroslav Šutej and Vilko Žiljak, and all feature prominent Croatians on front and architectural motifs on back. The geometric figures at lower left on front (except the 5-kuna note) are intaglio printed for recognition by the sight-impaired. To the right of the coat of arms on front is a microprinted version of the Croatian national anthem, Lijepa naša domovino (Our Beautiful Homeland).[13] The overall design is reminiscent of Deutsche Mark banknotes of the fourth series. The 5 kuna note is no longer in circulation, but remains a legal tender. 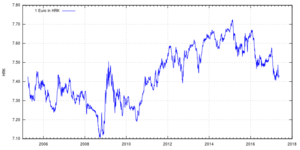