From Infogalactic: the planetary knowledge core
(Redirected from Crores)
Jump to: navigation, search

A crore (/ˈkrɔər/; abbreviated cr) is a unit in the Indian numbering system equal to ten million (10,000,000; in scientific notation: 107). It is widely used in India, Bangladesh, Pakistan, Sri Lanka and Nepal, and is written in these regions as 1,00,00,000 with the local style of digit group separators. It is equal to a hundred lakh (a lakh is equal to one hundred thousand and is written as 1,00,000). 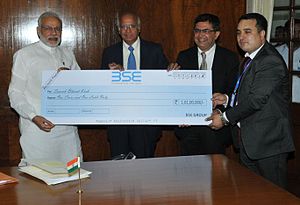 Trillions of ₹ are often written or spoken of in terms of lakh crore. For example, one trillion rupees is:

lakh is also used in Sri Lanka, most Sri Lankans use the term koatiya (කෝටිය) or koti (கோடி) for crore when referring to money.

The word crore is derived from the Prakrit word krodi,[1] denoting ten million in the Indian numbering system, which has separate terms for most powers of ten from 100 up to 1019. The crore is known by various regional names in modern languages.