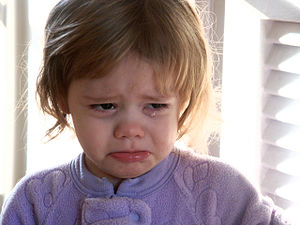 For crying to be described as sobbing, it usually has to be accompanied by a set of other symptoms, such as slow but erratic inhalation, occasional instances of breath holding and muscular tremor.

A neuronal connection between the lacrimal gland (tear duct) and the areas of the human brain involved with emotion has been established. There is debate among scientists over whether or not humans are the only animals that produce tears in response to emotional states.[3][4] Charles Darwin wrote in The Expression of the Emotions in Man and Animals that the keepers of Indian elephants in the London Zoo told him that their charges shed tears in sorrow.

Tears produced during emotional crying have a chemical composition which differs from other types of tears. They contain significantly greater quantities of the hormones prolactin, adrenocorticotropic hormone, Leu-enkephalin,[5] and the elements potassium and manganese.[3] 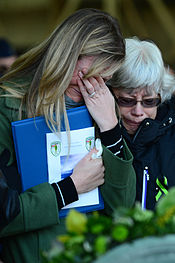 Two women weep at a funeral

The question of the function or origin of emotional tears remains open. Theories range from the simple, such as response to inflicted pain, to the more complex, including nonverbal communication in order to elicit altruistic behavior from others.[6] Some have also claimed that crying can serve several biochemical purposes, such as relieving stress and releasing toxins from the body.[7] Crying is believed to be an outlet or a result of a burst of intense emotional sensations, such as agony, surprise or joy. This theory is more plausible as it explains why people cry during cheerful events, as well as very painful events.[8]

Individuals tend to remember the positive aspects of crying, and may create a link between other simultaneous positive events, such as resolving feelings of grief. Together, these features of memory reinforce the idea that crying helped the individual.[9]

In Hippocratic and medieval medicine, tears were associated with the bodily humors, and crying was seen as purgation of excess humors from the brain.[10] William James thought of emotions as reflexes prior to rational thought, believing that the physiological response, as if to stress or irritation, is a precondition to cognitively becoming aware of emotions such as fear or anger.

William H. Frey II, a biochemist at the University of Minnesota, proposed that people feel "better" after crying due to the elimination of hormones associated with stress, specifically adrenocorticotropic hormone. This, paired with increased mucosal secretion during crying, could lead to a theory that crying is a mechanism developed in humans to dispose of this stress hormone when levels grow too high.[11]

Recent psychological theories of crying emphasize the relationship of crying to the experience of perceived helplessness.[12] From this perspective, an underlying experience of helplessness can usually explain why people cry. For example, a person may cry after receiving surprisingly happy news, ostensibly because the person feels powerless or unable to influence what is happening.

Emotional tears have also been put into an evolutionary context. One study proposes that crying, by blurring vision, can handicap aggressive or defensive actions, and may function as a reliable signal of appeasement, need, or attachment.[13] Oren Hasson, an evolutionary psychologist in the zoology department at Tel Aviv University believes that crying shows vulnerability and submission to an attacker, solicits sympathy and aid from bystanders, and signals shared emotional attachments.[14]

Another theory that follows evolutionary psychology is given by Paul D. MacLean, who suggests that the vocal part of crying was used first as a "separation cry" to help reunite parents and offspring. The tears, he speculates, are a result of a link between the development of the cerebrum and the discovery of fire. MacLean figures that since early humans must have relied heavily on fire, their eyes were frequently producing reflexive tears in response to the smoke. As humans evolved the smoke possibly gained a strong association with the loss of life and, therefore, sorrow.[15]

It can be very difficult to observe biological effects of crying, especially considering many psychologists believe the environment in which a person cries can alter the experience of the crier. However, crying studies in laboratories have shown several physical effects of crying, such as increased heart rate, sweating, and slowed breathing. Although it appears that the type of effects an individual experiences depends largely on the individual, for many it seems that the calming effects of crying, such as slowed breathing, outlast the negative effects, which could explain why people remember crying as being helpful and beneficial.[16]

Other common side effects of crying are quivering lips, a runny nose, and an unsteady, cracking voice.

Men tend to cry for between two and four minutes, and women cry for about six minutes. Crying turns into sobbing for women in 65% of cases, compared to just 6% for men. Until adolescence, however, no difference between the sexes was found.[21][22]

Types of crying in infants

Although crying is an infant's mode of communication, it is not limited to a monotonous sound. There are three different types of cries apparent in infants. The first of these three is a basic cry, which is a systematic cry with a pattern of crying and silence. The basic cry starts with a cry coupled with a briefer silence, which is followed by a short high-pitched inspiratory whistle. Then, there is a brief silence followed by another cry. Hunger is a main stimulant of the basic cry. An anger cry is much like the basic cry; however, in this cry, more excess air is forced through the vocal cords, making it a louder, more abrupt cry. This type of cry is characterized by the same temporal sequence as the basic pattern but distinguished by differences in the length of the various phase components. The third cry is the pain cry, which, unlike the other two, has no preliminary moaning. The pain cry is one loud cry, followed by a period of breath holding. Most adults can determine whether an infant's cries signify anger or pain.[23] Most parents also have a better ability to distinguish their own infant's cries than those of a different child.[24] A 2009 study found that babies mimic their parents' pitch contour. French infants wail on a rising note while German infants favor a falling melody.[25]

T. Berry Brazelton has suggested that overstimulation may be a contributing factor to infant crying and that periods of active crying might serve the purpose of discharging overstimulation and helping the baby’s nervous system regain homeostasis.[26][27]

Sheila Kitzinger found a correlation between the mother's prenatal stress level and later amount of crying by the infant. She also found a correlation between birth trauma and crying. Mothers who had experienced obstetrical interventions or who were made to feel powerless during birth had babies who cried more than other babies. Rather than try one remedy after another to stop this crying, she suggested that mothers hold their babies and allow the crying to run its course.[28] Other studies have supported Kitzinger's findings. Babies who had experienced birth complications had longer crying spells at three months of age and awakened more frequently at night crying.[29][30]

Based on these various findings, Aletha Solter has proposed a general emotional release theory of infant crying. When infants cry for no apparent reason after all other causes (such as hunger or pain) are ruled out, she suggests that the crying may signify a beneficial stress-release mechanism. She recommends the "crying-in-arms" approach as a way to comfort these infants.[31][32][33] 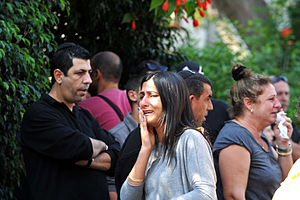 Crying people in Israel because they are mourning the loss of three people that were killed by a Hamas rocket.

There have been many attempts to differentiate between the two distinct types of crying (one negative and one positive). Different perspectives have been broken down into three dimensions to examine the emotions being felt and also to grasp the contrast between the two types.[34]

Spatial perspective explains sad crying as reaching out to be "there," such as at home or with a person who may have just died. In contrast, joyful crying is acknowledging being "here." It emphasized the intense awareness of one's location, such as at a relative's wedding.[34]

Temporal perspective explains crying slightly differently. In temporal perspective, sorrowful crying is due to looking to the past with regret or to the future with dread. This illustrated crying as a result of losing someone and regretting not spending more time with them or being nervous about an upcoming event. Crying as a result of happiness would then be a response to a moment as if it is eternal; the person is frozen in a blissful, immortalized present.[34]

The last dimension is known as the public-private perspective. This describes the two types of cryings as ways to imply details about the self as known privately or one's public identity. For example, crying due to a loss is a message to the outside world that pleads for help with coping with internal sufferings. Or, as Arthur Schopenhauer suggested, sorrowful crying is a method of self-pity or self-regard, a way one comforts oneself. Joyful crying, in contrast, is in recognition of beauty, glory, or wonderfulness.[34]

In Buddhism, the practice of equanimity excludes crying, as Venerable Ananda is thought to have done upon Buddha's passing. As a monk, crying is considered an exaggerated, unskillful, and selfish emotion. At Buddhist funerals, crying may be less common than in the Western world.[citation needed]

The Shia Ithna Ashari (those Muslims who believe in twelve Imams after Muhammad) consider crying to be an important responsibility towards their leaders who were martyred. They believe - A true lover of Imam Hussain can feel the afflictions and oppressions Imam Hussain suffered; his feelings are so immense that they break out into tears and wail. The pain of the beloved is the pain of the lover. Crying on Imam Husain is the sign or expression of true love. The Imams of Shias have encouraged crying especially on Imam Husaain and have informed about rewards for this act. They support their view through a tradition (saying) from Muhammad who said: (On the Day of Judgment, a group would be seen in the most excellent and honourable of states. They would be asked if they were of the Angels or of the Prophets. In reply they would state): "We are neither Angels nor Prophets but of the indigent ones from the ummah of Muhammad". They would then be asked: "How then did you achieve this lofty and honourable status?" They would reply: "We did not perform very many good deeds nor did we pass all the days in a state of fasting or all the nights in a state of worship but yes, we used to offer our (daily) prayers (regularly) and whenever we used to hear the mention of Muhammad, tears would roll down our cheeks".(Mustadrak al‑Wasail, vol 10, pg. 318) 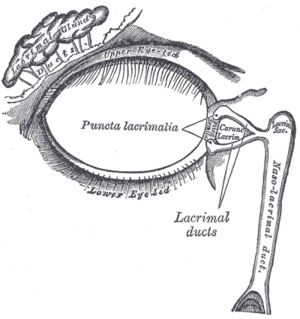 A diagram showing the lacrimal apparatus

There are three types of tears: basal tears, reflexive tears, and psych tears. Basal tears are produced at a rate of about 1 to 2 microliters a minute, and are made in order to keep the eye lubricated and smooth out irregularities in the cornea. Reflexive tears are tears that are made in response to irritants to the eye, such as when chopping onions or getting poked in the eye. Psych tears are produced by the lacrimal system and are the tears expelled during emotional states.[35]