The traditional culture of Samoa is a communal way of life based on Fa'a Samoa, the unique socio-political culture. In Samoan culture, most activities are done together. There are 3 main parts in the Samoan culture, that is faith, family and music. The traditional living quarters, or fale (houses), contain no walls and up to 20 people may sleep on the ground in the same fale. During the day, the fale is used for chatting and relaxing. One's family is viewed as an integral part of a person's life. The aiga or extended family lives and works together. Elders in the family are greatly respected and hold the highest status, and this may be seen at a traditional Sunday umu (underground oven).

Construction of a Samoan fale, c. 1896 (see: Architecture of Samoa)

Women play an important part in contributing with their skills in items of important cultural value including 'ie toga, finely woven mats used in ceremony and gift exchanges.[4][5] In terms of material goods, during ritual exchange, women give fine mats 'ie toga and decorated bark cloth siapo while men give woodworking items and red feathers.[6]

Bark cloth, called siapo in Samoa (similar to the Fijian tapa cloth called masi), both of which is made from beaten mulberry bark.[7][8] Patterns or pictures are painted on with a natural brown dye taken from a tree souce. These pictures typically depict abstract and realistic depictions of plant life, shells, fish, turtles, and hibiscus flowers. The siapo may be used for clothing, for wrapping objects and even simply for decorative reasons. Ornaments, jewelry and hair accessories are made from naturally occurring materials such as sea shells, coconut and coir. Traditional Samoan medicine is often practiced as a first-line before hospital medicine. This is a type of alternative medicine using plant leaves to massage the affected area.

Wooden figurative sculpture was extremely rare in pre-Christian Samoa, and share some similarities with Fijian and Tongan sculpture.[9]

The 'ava ceremony is the most significant ritual which takes place during all important occasions, including the bestowal of matai chiefly titles.[10] The overall ceremony is highly ritualized, with specific gestures and phrases to be used at various times. Ceremonial items for the 'ava ceremony include the tanoa (round wooden bowl) similar to those used in the kava cultures of other Polynesian societies. The tanoa are made of varying sizes supported by many short legs around it. These bowls and other related instruments are often highly decorated. Known as kava in other parts of Polynesia, the 'ava is a beverage produced from a plant that is drunk throughout the western Pacific region. The drinking of ʻava in Samoa is generally done through highly ritualized ʻava ceremonies. The kava is prepared by a group of people called aumaga. It is brought to each participant by the tautuaʻava, or ʻava server, in the order proscribed by the tufaʻava, or ʻava distributor. Usually, the highest chief of the visiting party is served first, followed by the highest chief of the host party, and then service proceeds based on the rank of the rest of the participants. The drink is served in a polished coconut half. 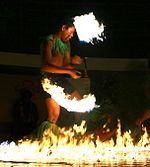 The traditional Samoan dance is the siva. The female siva is with gentle movements of the hands and feet in time to music. The sasa is a group dance performed sitting to a drum rhythm. Samoan males traditionally perform the fa'ataupati (slap dance), usually performed in a group with no music accompaniment. Other types of dance are modern dance by the younger generations. Traditional Samoan dance is arguably the one area of Samoan culture that has not been touched by Western Civilization. The maulu'ulu is a group dance performed by female counterparts only, also the taualuga is the main Samoan traditional dance that is performed by a village chief (manaia) or village chiefess (taupou). It is often performed at weddings, birthdays and other Samoan celebrations.[11]

In American Samoa, most people are bilingual; they speak both English and Samoan. In Samoa, people in Samoa are also bilingual but Samoan is mostly stronger and mostly spoken, although the inhabitants of Swains Island speak Tokelauan.

The traditional ladies clothing is the puletasi which is a matching skirt and tunic with Samoan designs. The lava-lava is a sarong which may be worn by men or women. They are of different patterns and colors, but tend to be plain for men who may wear it as part of an official uniform. Some men have intricate and geometrical patterns that are tattooed onto their lower body and upper legs. The tattooing process is performed without any anaesthesia and is extremely painful. Ceremonial attire includes a headdress called tuiga which is made of shells and feathers.[12][13]

Religion in Samoa encompasses a range of groups, but nearly 100% of the population in Samoa is Christian.[14] The 2001 Census revealed the following distribution of Christian groups: Congregational Christian, 34.8 percent; Roman Catholic, 19.6 percent; Methodist, 15 percent; The Church of Jesus Christ of Latter-day Saints (LDS Church), 12.7 percent; Assemblies of God, 6.6 percent; and Seventh-day Adventist, 3.5 percent.[14] These statistics reflected continual growth in the number and size of Mormons and Assemblies of God and a relative decline in the membership of the historically larger denominations.[14] The following groups constitute less than 5 percent of the population: Nazarene, Anglican, Congregational Church of Jesus, Worship Centre, Jehovah's Witnesses, Full Gospel, Peace Chapel, Elim Church, Voice of Christ, and Baptist.[14] 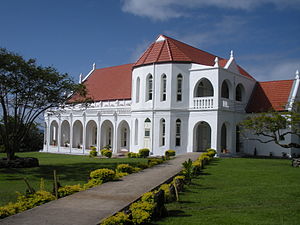 There are also members of other religions such as Islam and the Baha'i Faith; the shared estimate of the Bahá'í population in Samoa circa 2000 according to a profile by the World Council of Churches and the online encyclopedia Encarta was 2% of the nation—some 3600 people—and the only non-Christian community of any number.[15][16] The country hosts one of only seven Baha'i Houses of Worship in the world.[14] The Baha'i Houses of Worship was dedicated by Malietoa Tanumafili II, King of Samoa (1913-2007), who was the first reigning Bahá'í monarch.[17] Although there were no official data, it is generally believed that there are also some practicing Hindus, Buddhists, and Jews in the capital city.[14]

All religious groups are multiethnic; none are composed exclusively of foreign nationals or native-born (Western) Samoans.[14] There are no sizable foreign national or immigrant groups, with the exception of U.S. nationals from American Samoa.[14] Missionaries operated freely within the country.[14] There is strong societal pressure at the village and local level to participate in church services and other activities, and financially support church leaders and projects.[14] In some denominations, such financial contributions often total more than 30 percent of family income.[14] The constitution provides for freedom of religion, and the government generally respected this right in practice.[14] The US government found there to be no reports of societal abuses or discrimination based on religious belief or practice in 2007.[14]

The main sports played in Samoa are rugby union and Samoan cricket (kirikiti). About 30 ethnic Samoans, many from American Samoa, currently play in the NFL. A 2002 article from ESPN estimated that a Samoan male (either an American Samoan, or a Samoan living in the 50 United States) is 40 times more likely to play in the NFL than a non-Samoan American. A number have also ventured into professional wrestling. Soccer is a popular sport in Samoa, with the national team being ranked 149th in the world.

Rugby union is the most popular sport in Samoa. The national team is consistently competitive against teams from vastly more populous nations. Samoa have competed at every Rugby World Cup since 1991, and have made the quarter finals in 1991, 1995 and 1999. Samoa also play in the Pacific Nations Cup. The sport is governed by the Samoa Rugby Football Union, who are members of the Pacific Islands Rugby Alliance, and thus, also contribute to the international Pacific Islanders rugby union team. At club level, there is the National Provincial Championship and Pacific Rugby Cup. Prominent Samoan players include Douglas Faaee, Pat Lam and Brian Lima. In addition, there are many Samoans that have played for or are playing for the All Blacks.

Rugby league is a popular sport in Samoa, with the national team reaching the quarter finals of the 2000 Rugby League World Cup. Australian rules football is a popular sport in Samoa, played as Samoa Rules with the national team, the Bulldogs, competing at the Arafura Games and the 2002 and 2005 Australian Football International Cup.

Samoans have been very visible in American professional wrestling, despite the relatively small population of the islands. Dwayne Johnson, Peter Maivia, Yokozuna, Umaga/Jamal, Manu, Rosey, Samoa Joe, The Wild Samoans, The Headshrinkers, Rikishi, and Sonny Siaki all have a Samoan heritage.

Sports in American Samoa are influenced by American culture and American football and its league, NFL are popular. For the Independent State of Samoa, New Zealandic and British influences has led to the popularity of rugby union, soccer, netball and volleyball.

The most salient and perhaps the most prominent part of Samoan culture at formal events is the process of Fa'aaloaloga (formal presentation of gifts). At weddings, chiefly installations (sa'ofaiga), funerals, opening of houses / churches, or any other public gathering of Samoans, Fa'aaloaloga will always be performed.

Ever since the formalisation of Christianity in Samoa and the inclusion of the Christian taeao or mornings into the general recitation of 'mornings' in Samoan speeches, the set protocol has been that the first presentations are always presented to the religious representatives present at the event. This is followed by the highest ranking chiefs by order of rank.

A standard set of presentation is called the sua[disambiguation needed]. This is usually made up of vailolo (drink with money in it; originally it was a coconut and a coconut frond called tuaniu), amoamosa (tray of biscuits and material or a combination of other small foodstuffs like a can of cornbeef), and a suatalisua (a box of cornbeef and chicken or similar). This is followed by a fine mat or several fine mats (mats of state - ie o le malo), which could vary from 5m long to 25-30m long and 10m high. Depending on the occasion and the rank of the person, each of those elements above could be magnified several times by the addition of numbers, and could also include a huge tapa cloth being tied to the young lady presenting the vailolo or draped several metres behind her as she presents it.

Samoan umu, an oven of hot rocks above ground.

Sundays are traditionally a day of rest, and many families congregate to share an umu together for a Sunday afternoon meal. In a traditional household, the older members of the family will sit and eat first, and as the meal continues the younger members and then children are invited to eat. The umu contains an abundance and variety of dishes ranging from a whole pig, fresh seaweed and crayfish to baked taro and rice. Coconut appears in many Samoan dishes, for example palusami, a parcel of coconut cream wrapped in taro leaves baked in the umu. This dish is eaten in its entirety including the leaves, and is rich in taste due to its coconut content.