Curry County is a county located in the U.S. state of Oregon. As of the 2010 census, the population was 22,364.[1] The county seat is Gold Beach.[2] The county is named for George Law Curry,[3] a governor of the Oregon Territory. 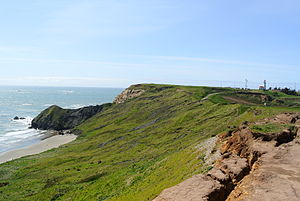 The westernmost point in Oregon is in Curry County at Cape Blanco located at Lua error in Module:Coordinates at line 668: callParserFunction: function "#coordinates" was not found.. 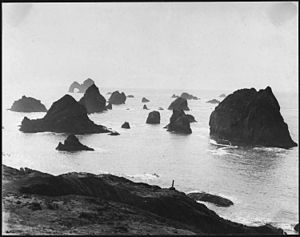 In 1852 explorers discovered gold and other precious metals in the rivers and along the beaches of this area. As a result, settlement in the county was concentrated along the coast, depending primarily on water transportation. The slow development of inland transportation routes kept the county relatively isolated well into the twentieth century. While there is still some mining of cobalt, nickel, and chromium in the Gasquet Mountain area, the economy has reoriented to agriculture and timber.[12] Port Orford cedar (also known as Lawson's Cypress) and myrtlewood are important export products.[13]

The county has excellent grazing areas for raising cattle and sheep. The county also produces blueberries, horticultural nursery stock, and 90% of all Easter lilies raised in the United States. In 2001, the native tanoak in the county were afflicted by Sudden oak death, caused by infection of Phytophthora ramorum, which has threatened the success of the local nurseries; however, the infection has been successfully contained to an area 12 miles (19 km) in size. Tourism is also important to Curry County. The Forest Service owns 59% of the land within the county boundaries. The Port of Brookings is considered one of the safest harbors on the coast.