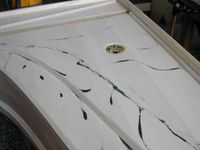 Cymatics, from Greek: κῦμα, meaning "wave", is a subset of modal vibrational phenomena. The term was coined by Hans Jenny (1904-1972), a Swiss follower of the philosophical school known as anthroposophy. Typically the surface of a plate, diaphragm or membrane is vibrated, and regions of maximum and minimum displacement are made visible in a thin coating of particles, paste or liquid.[1] Different patterns emerge in the excitatory medium depending on the geometry of the plate and the driving frequency.

The apparatus employed can be simple, such as the old Chinese singing bowl, in which copper handles are rubbed and cause the copper bottom elements to vibrate. Other examples include the Chladni Plate[2] and the so-called cymascope.

The German musician and physicist Ernst Chladni noticed in the eighteenth century that the modes of vibration of a membrane or a plate can be observed by sprinkling the vibrating surface with a fine dust (e.g., lycopodium powder, flour or fine sand). The powder moves due to the vibration and accumulates progressively in points of the surface corresponding to the sound vibration. The points form a pattern of lines, known as nodal lines of the vibration mode. The normal modes of vibration, and the pattern of nodal lines associated with each of these, are completely determined, for a surface with homogeneous mechanical characteristics, from the geometric shape of the surface and by the way in which the surface is constrained.[3]

Experiments of this kind, similar to those carried out earlier by Galileo Galilei[4] around 1630 and by Robert Hooke in 1680, were later perfected by Chladni, who introduced them systematically in 1787 in his book Entdeckungen über die Theorie des Klanges (Discoveries on the theory of sound). This provided an important contribution to the understanding of acoustic phenomena and the functioning of musical instruments. The figures thus obtained (with the aid of a violin bow that rubbed perpendicularly along the edge of smooth plates covered with fine sand) are still designated by the name of "Chladni figures".

In 1967 Hans Jenny, a follower of the anthroposophical doctrine of Rudolf Steiner, published two volumes entitled Kymatic (1967 and 1972), in which, repeating Chladni's experiments, he claimed the existence of a subtle power based on the normal, symmetrical images made by sound waves. Jenny put sand, dust and fluids on a metal plate connected to an oscillator which could produce a broad spectrum of frequencies. The sand or other substances were organized into different structures characterized by geometric shapes typical of the frequency of the vibration emitted by the oscillator.

According to Jenny, these structures, reminiscent of the mandala and other forms recurring in nature, would be a manifestation of an invisible force field of the vibrational energy that generated it. He was particularly impressed by an observation that imposing a vocalization in ancient Sanskrit of Om (regarded by Hindus and Buddhists as the sound of creation) the lycopodium powder formed a circle with a centre point, one of the ways in which Om had been represented. In fact, for a plate of circular shape, resting in the centre (or the border, or at least in a set of points with central symmetry), the nodal vibration modes all have central symmetry, so the observation of Jenny is entirely consistent with well-known mathematical properties.

The physical phenomena involved in the formation of Chladni figures are best explained by classical physics.

It has been posited that sound waves generating particular patterns may stimulate healing.[5] However, other than select articles on the subject of low-amplitude high-frequency sound in bone fracture healing,[6] there is no medical evidence of this phenomenon, yet.

Influences on art and music

Hans Jenny's book on Chladni figures influenced Alvin Lucier and helped lead to Lucier's composition Queen of the South. Jenny's work was also followed up by Center for Advanced Visual Studies (CAVS) founder György Kepes at MIT.[7] His work in this area included an acoustically vibrated piece of sheet metal in which small holes had been drilled in a grid. Small flames of gas burned through these holes and thermodynamic patterns were made visible by this setup.

In the mid 1980s, visual artist Ron Rocco, who also developed his work at CAVS, employed mirrors mounted to tiny servo motors, driven by the audio signal of a synthesizer and amplified by a tube amp to reflect the beam of a laser. This created light patterns which corresponded to the audio's frequency and amplitude. Using this beam to generate video feedback and computers to process the feedback signal, Rocco created his "Andro-media" series of installations. Rocco later formed a collaboration with musician David Hykes, who practiced a form of Mongolian overtone chanting with The Harmonic Choir, to generate cymatic images from a pool of liquid mercury, which functioned as a liquid mirror to modulate the beam of a Helium-Neon laser from the sound thus generated. Photographs of this work can be found in the Ars Electronica catalog of 1987.[8]

Contemporary German photographer and philosopher Alexander Lauterwasser has brought cymatics into the 21st century using finely crafted crystal oscillators to resonate steel plates covered with fine sand and to vibrate small samples of water in Petri dishes. His first book, Water Sound Images,[9] translated into English in 2006, features imagery of light reflecting off the surface of water set into motion by sound sources ranging from pure sine waves to music by Beethoven, Karlheinz Stockhausen, electroacoustic group Kymatik (who often record in ambisonic surround sound) and overtone singing. The resulting photographs of standing wave patterns are striking. Lauterwasser's book focused on creating detailed visual analogues of natural patterns ranging from the distribution of spots on a leopard to the geometric patterns found in plants and flowers, to the shapes of jellyfish and the intricate patterns found on the shell of a tortoise.

Composer Stuart Mitchell and his father T.J. Mitchell claimed that Rosslyn Chapel's carvings supposedly contain references to cymatics patterns. In 2005 they created a work called The Rosslyn Motet realised by attempting to match various Chladni patterns to 13 geometric symbols carved onto the faces of cubes emanating from 14 arches.[10] Like many claims in the cymatics community, the hypothesis that the carvings represent Chladni patterns is not supported by scientific or historical evidence. One of the problems is that many of the 'box' carvings are not original, having been replaced in the 19th century following damage by erosion.

Inspired by periodic and symmetrical patterns at the air-liquid interface created by sound vibration, P. Chen and coworkers developed a method to engineer diverse structures from microscale materials using liquid-based templates.[12] This liquid-based template can be dynamically reconfigured by tuning vibration frequency and acceleration.