From Infogalactic: the planetary knowledge core
Jump to: navigation, search
This article is about a city in Spain. For the place in Israel, see Denia, Haifa.

Dénia (Valencian: [ˈdenia], locally: [ˈdenjɐ]; Spanish: Denia [ˈdenja]) is a city in the province of Alicante, Spain, on the Costa Blanca halfway between Alicante and Valencia, the judicial seat of the comarca of Marina Alta. As of 2014[update], it had a population of 41,672.[1]

The popular resort town of Xàbia (Jávea) is nearby.

There is evidence of human habitation in the area since prehistoric times and there are significant Iberian ruins on the hillsides nearby. In the 4th century BC it was a Greek colony of Marseille or Empúries, being mentioned by Strabo as Hemeroscòpion. It was an ally of Rome during the Punic Wars, and later was absorbed into the Roman Empire under the name of Dianum. In the 1st century BC Quintus Sertorius established a Roman naval base here.[2]

In 636-696 AD, during the Visigothic Kingdom of Iberia, it was the seat of a bishop from Toledo. After the Muslim conquest of Iberia and the dissolution of the Caliphate of Córdoba, Dénia (known as Dāniyah or دانية in Arabic which means lowland) became the capital of a taifa kingdom that reigned over part of the Valencian coast and Ibiza. The Slavic Muslim slaves, saqālibah, led by Muyahid ibn Yusuf ibn Ali their leader, who could take profit from the progressive crumbling of the Caliphate's superstructure to gain control over the province of Dénia. The Saqaliba managed to free themselves and run the Taifa of Dénia which extended its reach as far as the islands of Majorca and its capital Madinah Mayurqah. The Saqaliba Taifa lost its independence in 1076, when it was captured by Ahmad al-Muqtadir, lord of Zaragoza, under which it remained until the Almoravid invasion in 1091. The Muslim Arabs originally built the castle fortress, and the French, who occupied the city for four years during the Peninsular War, re-built it in the early 19th century. 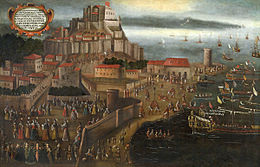 1609 Expulsion of the Moriscos at the port of Dénia, by Vincente Mostre

The town was reconquered by the Christians in 1244. This caused a decline for the city, which remained nearly uninhabited after the exile of most of the Muslim population. It was later repopulated by the Valencian government. Created a fief in 1298, it was held by the de Sandoval family from 1431, although the city itself was returned to Aragonese crown in 1455. A marquisate from 1487, Dénia gained many privileges thanks to Francisco Gómez de Sandoval y Rojas, Duke of Lerma, a favourite of Philip III of Spain. It suffered a further period of decay after the decree of Expulsion of the Moriscos (1609), by which 25,000 people left the marquisate, leaving the local economy in a dismal state.

During the War of the Spanish Succession Dénia was besieged by 9,000 French troops in June 1707, who broke down several sections of the town walls using cannon, but their attacks in July were repulsed by the small garrison with great loss of life to the attackers resulting in the siege being raised after 27 days. Dénia however fell to the French forces that November. In 1713 the Treaty of Utrecht recognised Louis XIV's grandson Philip, Duke of Anjou, as King of Spain (as Philip V), so returning Dénia to Spanish rule.

It was reacquired by the Spanish crown in 1803, after which Denia gained an increasingly important role as a trading port. A community of English raisin traders lived in Denia from 1800 until the time of the Spanish Civil War in the late 1930s.

Dénia is home to a castle on a rocky crag overlooking the city. It was built in the 11th and 12th century and offers views around the sea, the city and the surrounding area. in the castle is the Palau del Governador its museum.

Dénia also has the Museu Etnològic with further details on the history and culture of the city.

The climate of Dénia is specially mild and comfortable, with an annual average of 19C. The winters are very short and mild (the winter temperatures can be perfectly considered as spring temperatures in a lot of mild climates) and the summers are long and hot. In fact, the climate of Dénia is so comfortable that the city has a monument praising the good weather of Dénia.[3] The mean temperature of the coldest month (January) is 12,5 °C (17 °C maximum and 8 °C minimum) while the mean of the hottest month (August) is 27 °C (32 °C maximum and 22 °C minimum). The climate is mediterranean-subtropical (Köppen climate classification: CSa) and it remains close to be considered as hot semi-arid climate (Köppen climate classification: BSh). The climate of Dénia enjoys more than 3.000h sunshine hours per year.

The ferry to Ibiza and the other Balearic Islands departs daily. The city also serves as the northern terminus for a picturesque 1,000 mm (3 ft 3 3⁄8 in) metre gauge railway line through the mountains from Alicante (popularly known as the Limón Express), run by FGV. This is not a specific tourist railway; it provides transport throughout the year and is geared to commuter use.

The bonfire festival is celebrated each March. Huge papier maché statues, called fallas are set up throughout the town, and then set ablaze.

The Bous a la Mar (meaning "Bulls at the Sea") is held in July. The highlight of this week long festival is watching bulls run down the main street Marqués de Campo, only to be chased into the Mediterranean sea by those daring enough to enter a makeshift bull ring with them.

Since 1974 it has been home to painter and sculptor Joan Castejón. The town honored him as Adoptive Son of Dénia in 1999.