From Infogalactic: the planetary knowledge core
Jump to: navigation, search
This article is about DVD recorders. For a list of recordable DVD formats, see DVD formats.

A DVD recorder is an optical disc recorder that uses Optical disc recording technologies to digitally record analog or digital signals onto blank writable DVD media. Such devices are available as either installable drives for computers or as standalone components for use in television studios or home theater systems.

As of March 1, 2007 all new tuner-equipped television devices manufactured or imported in the United States must include an ATSC tuner. The US Federal Communications Commission (FCC) has interpreted this rule broadly, including apparatus such as computers with TV tuner cards with video capture ability, videocassette recorders and standalone DVD recorders. NTSC DVD recorders are therefore undergoing a transformation, either adding a digital ATSC tuner or removing over-the-air broadcast television tuner capability entirely.[1] However these DVD recorders can still record analog audio and analog video. 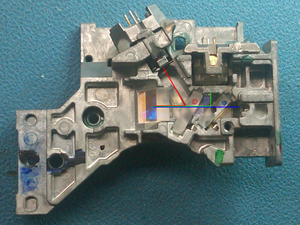 Recording speed is generally denoted in values of X (similar to CD-ROM usage), where 1X in DVD usage is equal to 1.321 MB/s, roughly equivalent to a 9X CD-ROM. In practice, this is largely confined to computer-based DVD recorders, since standalone units generally record in real time, that is, 1X speed.

Recorders use a laser (usually 650 nm red) to read and write DVDs. The reading laser is usually not stronger than 5 mW, while the writing laser is considerably more powerful. The faster the writing speed is rated, the stronger the laser is. DVD burner lasers often peak at about 100-400 mW in continuous wave (some are pulsed). Some laser hobbyists have discovered ways to extract the laser diode from DVD burners and modify them to create laser apparatus that can cause burning.

DVD recorder drives have become standard equipment in many, though not all, computer systems currently on the market, after being initially popularized by the Pioneer/Apple SuperDrive; aftermarket drives as of early 2007 can cost as little as $23.[2] DVD recorder drives can be used in conjunction with DVD authoring software to create DVDs near or equal to commercial quality, and are also widely used for data backup and exchange. As a general rule, computer-based DVD recorders can also handle CD-R and CD-RW media; in fact, a number of standalone DVD recorders actually use drives designed for computers.

DVD recorder drives manufactured since January 2000 are required by the DVD consortium to respect DVD region codes when reading a disc, but are incapable of assigning region codes when writing a disc (as this is stored on a part of the disc to which regular PC based and stand alone video recorders do not have write access.

DVD duplication systems are generally built out of stacks of these drives, connected through a computer-based backplane.

When the standalone DVD recorder first appeared on the Japanese consumer market in 1999, these early units were very expensive, costing between $2500 and $4000 USD. However, as of early 2007, DVD recorders from notable brands are selling for US$200 or €150 and less, with even lower "street prices". Early units supported only DVD-RAM and DVD-R discs, but the more recent units can record to all major formats DVD-R, DVD-RW, DVD+R, DVD+RW, DVD-R DL and DVD+R DL. Some models now include mechanical hard disk drive-based digital video recorders (DVRs) to improve ease of use. Standalone DVD recorders generally have basic DVD authoring software built in; however, the appearance of the finished DVD is very basic and usually completely under the control of the unit.

Some believed that DVD recorders would supersede the VCR as the standard television-recording device; however as technology progresses, in 2009 Panasonic introduced the world's first Blu-ray Disc recorder which is capable of recording both DVDs and Blu-ray discs and features built in satellite HDTV tuners. A year later, Panasonic introduced further more Blu-ray disc recorders with terrestrial HDTV tuners.

DVD recorders have several technical advantages over VCRs, including:

It does have some disadvantages:[citation needed]

However, an inconvenience exists in which DVDs recorded with DVD recorders in the standard DVD format must be finalized to view in other DVD players. (This disadvantage does not apply to discs recorded in the newer and more flexible Video recorder 'DVD-VR' format or the DVD+VR format - the later (but not the former) also being compatible with DVD players.) The implementation of MPEG-2 compression used on most standalone DVD recorders is required to compress the picture data in real time, producing results that may not be up to the standard of professionally rendered DVD video, which can take days to compress.

The United States converted its over-the-air television broadcasts to digital "ATSC" in June 2009. However this will have very limited impact in ending the need for DVD recorders to perform realtime MPEG-2 encoding or transcoding. The only setup where ATSC could conceivably eliminate MPEG-2 encoding/transcoding in a DVD recorder would be where an antenna is hooked directly into a DVD recorder that has an integrated ATSC tuner. Even then however, the DVD recorder will have to transcode the ATSC MPEG-2 into DVD-Video-compliant MPEG-2 if the ATSC MPEG-2 stream isn't already DVD-Video-compatible. This would require transcoding for all high-definition broadcasts and some if not all standard-definition broadcasts. The same general situation applies to digital cable service; only DVD recorders with integrated digital cable ("QAM") tuners can possibly avoid transcoding, and then only if the digital cable system is already sending a DVD-Video-compatible MPEG-2 stream, which again requires transcoding of all HD content and some if not all SD content. All other setups (digital cable box's analog outputs to DVD recorder, satellite box's analog outputs to DVD recorder, DVD recorder tuning and recording analog cable channels which are still permitted after 2/2009, etc.) usually always involve an analog step with MPEG-2 encoding being necessary inside the DVD recorder.

A number of manufacturers have combined DVD recorders with mechanical hard disk drive-based digital video recorders, allowing for recording to large fixed disks, and the ability to view these recordings off the hard disk at a later date.

As a result of the North American digital switchover, tuner-equipped devices manufactured or imported into the United States are now required by the US Federal Communications Commission to include digital tuners.

This has caused most new VHS recorders to be implemented as DVD/VCR combo units, or to be manufactured without tuners. The US requirement of ATSC compatibility forces inclusion of MPEG-2 decoding hardware, which is already part of all DVD players but which otherwise would not have been needed in an analog-only VCR.

An ATSC-capable DVD unit can also serve as a more-powerful alternative to digital television adapters, which allow DTV reception with older NTSC analog televisions. The DVD recorders offer additional capabilities, such as automated VCR-style timeshifting of programming and a variety of output formats, that are deliberately not included in the most common mass-market US ATSC converters.

Unlike the more common digital television adapter boxes, newer DVD recorder units are able to tune both analog and digital signals - an advantage when receiving low-power television and foreign (analogue) signals. Some, however, do suffer from many of the same design limitations as the less costly converter boxes, including poorly designed signal strength meters, incomplete display of broadcast program information, incompatibility with antenna rotators or CEA-909 smart antennas and inability to add digital channels without wiping out all existing channels and rescanning the entire band.

A DVD recording of an over-the-air HDTV broadcast is at DVD resolution, which is inferior to the original broadcast with 720p or 1080i resolution. Some units also provide limited USB or flash memory interface capability, often only supporting viewing of digital camera still photos or playback of MP3s with no ability to write video to these media.

A small number of DVD recorders are also capable of recording to SVCD, VCD and even Audio CD formats. Recording to DVDs can be done at different speeds giving between 1 and 6 hours (even up to 8 hours on certain models) on a standard (single sided 12 cm) blank DVD. With some trade off between recording time and video quality.

8 cm miniDVDs are widely used on some digital camcorders, primarily those meant for a consumer market ("point and shoot"); such discs are usually playable on a full-sized DVD player, but may not record on a full-sized DVD recorder system. Though popular for their convenience (in the manner of VHS-C), DVD camcorders are not considered suitable for more than casual use due to the much higher level of compression used compared to MiniDV and the difficulty of editing MPEG-2 video.