listen); 29 July 1905 – 18 September 1961) was a Swedish diplomat, economist, and author. The second Secretary-General of the United Nations, he served from April 1953 until his death in a plane crash in September 1961. At the age of 7009150523920000000♠47 years, 255 days, Hammarskjöld is the youngest to have held the post. He is one of only four people to be awarded a posthumous Nobel Prize.[1] Hammarskjöld is the only UN Secretary-General to die in office; his death occurred en route to cease-fire negotiations. US President John F. Kennedy called Hammarskjöld "the greatest statesman of our century".[2] 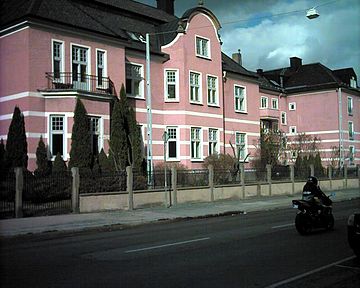 Dag Hammarskjöld was born in Jönköping, Sweden, but spent most of his childhood in Uppsala. The fourth and youngest son of Hjalmar Hammarskjöld, Prime Minister of Sweden from 1914 to 1917,[3] and Agnes Hammarskjöld (née Almquist), Hammarskjöld's ancestors served the Monarchy of Sweden since the 17th century. He studied first at Katedralskolan and then at Uppsala University. By 1930, he had obtained Licentiate of Philosophy and Master of Laws degrees. Before he was finished his law degree he had already obtained a job as assistant secretary of the unemployment committee.[4]

From 1930 to 1934, Hammarskjöld was Secretary of a governmental committee on unemployment. During this time he wrote his economics thesis, "Konjunkturspridningen" ("The Spread of the Business Cycle"), and received a doctorate from Stockholm University.[4] In 1936, he became Secretary of the Sveriges Riksbank and was soon promoted. From 1941 to 1948, he served as Chairman of the bank.

Dag Hammarskjöld quickly developed a successful career as a Swedish public servant. He was Secretary of the Riksbank (the central bank of Sweden) 1935–1941, State Secretary in the Ministry of Finance 1936–1945, Governor of the Riksbank 1941–1948, Swedish delegate to the OEEC (Organization for European Economic Cooperation) 1947–1953, Cabinet Secretary for the Ministry of Foreign Affairs 1949–1951 and minister without portfolio in Tage Erlander's government 1951–1953.[4] 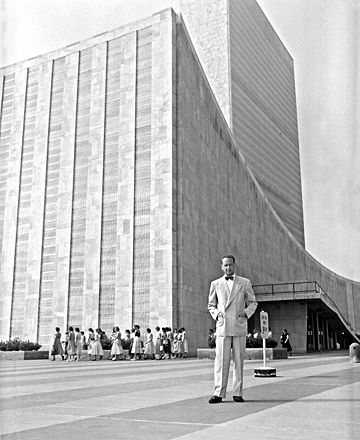 Hammarskjöld outside the UN headquarters in New York City

When Trygve Lie resigned from his post as UN Secretary-General in 1953, the United Nations Security Council recommended Hammarskjöld for the post. It came as a surprise to him.[5] Seen as a competent technocrat without political views, he was selected on 31 March by a majority of 10 out of eleven Security Council members. The UN General Assembly elected him in the 7–10 April session by 57 votes out of 60. In 1957, he was re-elected.

Hammarskjöld began his term by establishing his own secretariat of 4,000 administrators and setting up regulations that defined their responsibilities. He was also actively engaged in smaller projects relating to the UN working environment. For example, he planned and supervised every detail in the creation of a "meditation room" at the UN headquarters. This is a place dedicated to silence where people can withdraw into themselves, regardless of their faith, creed, or religion.[6]

During his term, Hammarskjöld tried to smooth relations between Israel and the Arab states. Other highlights include a 1955 visit to China to negotiate release of 11 captured US pilots who had served in the Korean War,[3] the 1956 establishment of the United Nations Emergency Force, and his intervention in the 1956 Suez Crisis. He is given credit by some historians for allowing participation of the Holy See within the United Nations that year.[7]

In 1960, the former Belgian Congo and then newly independent Congo asked for UN aid in defusing the Congo Crisis. Hammarskjöld made four trips to Congo. His efforts toward the decolonisation of Africa were considered insufficient by the Soviet Union; in September 1960, the Soviet government denounced his decision to send a UN emergency force to keep the peace. They demanded his resignation and the replacement of the office of Secretary-General by a three-man directorate with a built-in veto, the "troika". The objective was, citing the memoirs of Soviet leader Nikita Khrushchev, to "equally represent interests of three groups of countries: capitalist, socialist and recently independent."[8][9]

Hammarskjöld is widely believed to have been homosexual, but there is no conclusive evidence.[10] 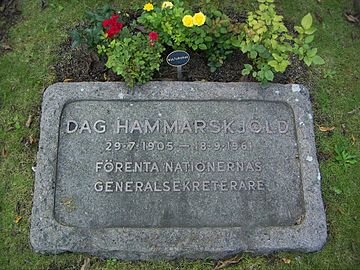 In September 1961, Hammarskjöld learned about fighting between "non-combatant" UN forces and Katangese troops of Moise Tshombe. He was en route to negotiate a cease-fire on 18 September when his Douglas DC-6 airliner SE-BDY crashed near Ndola, Northern Rhodesia (now Zambia). Hammarskjöld and fifteen others perished in the crash. The circumstances of the incident are still not clear. There is some recent evidence that suggest the plane was shot down.[11][12][13]

Göran Björkdahl (a Swedish aid worker) wrote in 2011 that he believed Dag Hammarskjöld's 1961 death was a murder committed in part to benefit mining companies like Union Minière, after Hammarskjöld had made the UN intervene in the Katanga crisis. Björkdahl based his assertion on interviews with witnesses of the plane crash near the border of the DRC with Zambia, and on archival documents.[14][15] Former U. S. President Harry Truman commented that Hammarskjöld "was on the point of getting something done when they killed him. Notice that I said 'when they killed him'."[16]

On 16 March 2015, UN Secretary General Ban Ki-moon appointed members to an Independent Panel of Experts which would examine new information related to his death. The three-member panel was led by Mohamed Chande Othman, the Chief Justice of Tanzania. The other two members were Kerryn Macaulay (Australia's representative to ICAO) and Henrik Larsen (a ballistics expert from the Danish National Police).[17] The panel's 99-page report, released 6 July 2015, assigned "moderate" value to nine new eyewitness accounts and transcripts of radio transmissions. Those accounts suggested that Hammarskjold's plane was already on fire as it landed, that other jet aircraft and intelligence agents were nearby.[18]

In 1953, soon after his appointment as United Nations secretary general, Hammarskjöld was interviewed on radio by Edward R. Murrow. In this talk he declared: "But the explanation of how man should live a life of active social service in full harmony with himself as a member of the community of spirit, I found in the writings of those great medieval mystics [Meister Eckhart and Jan van Ruysbroek] for whom 'self-surrender' had been the way to self-realization, and who in 'singleness of mind' and 'inwardness' had found strength to say yes to every demand which the needs of their neighbours made them face, and to say yes also to every fate life had in store for them when they followed the call of duty as they understood it."[19]

His only book, Vägmärken (Markings), was published in 1963. A collection of his diary reflections, the book starts in 1925, when he was 20 years old, and ends at his death in 1961.[20] This diary was found in his New York house, after his death, along with an undated letter addressed to then Swedish Permanent Under-Secretary for Foreign Affairs, Leif Belfrage. In this letter, Dag writes, "These entries provide the only true 'profile' that can be drawn ... If you find them worth publishing, you have my permission to do so". The foreword is written by W.H. Auden, a friend of Dag's.[21] Markings was described by a theologian, the late Henry P. Van Dusen, as "the noblest self-disclosure of spiritual struggle and triumph, perhaps the greatest testament of personal faith written ... in the heat of professional life and amidst the most exacting responsibilities for world peace and order."[22] Hammarskjöld writes, for example, "We are not permitted to choose the frame of our destiny. But what we put into it is ours. He who wills adventure will experience it – according to the measure of his courage. He who wills sacrifice will be sacrificed – according to the measure of his purity of heart."[23] Markings is characterised by Hammarskjöld's intermingling of prose and haiku poetry in a manner exemplified by the 17th-century Japanese poet Basho in his Narrow Roads to the Deep North.[24] In his foreword to Markings, the English poet W. H. Auden quotes Hammarskjöld as stating "In our age, the road to holiness necessarily passes through the world of action."[25]

The Evangelical Lutheran Church in America commemorates the life of Hammarskjöld as a renewer of society on the anniversary of his death, 18 September. 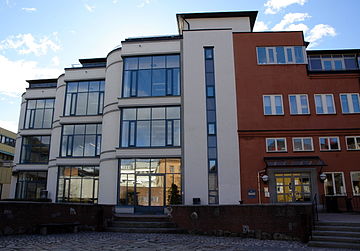 The Dag Hammarskjöld Library in Uppsala