Daily Mail and General Trust plc is an international portfolio of businesses in industries such as media, energy, education, insurance, and property. The company operates in over 40 countries through its subsidiaries RMS, dmg information, dmg events, Euromoney Institutional Investor, dmg media and JVs and Associates. It is listed on the London Stock Exchange.[2] Jonathan Harmsworth, 4th Viscount Rothermere is the chairman and controlling shareholder of the company.[3] The head office is located in the Northcliffe House in Kensington, London Borough of Kensington and Chelsea.

The group can trace its origins back to launch of the mid market national newspaper the Daily Mail by Harold Harmsworth, 1st Viscount Rothermere and his elder brother, Alfred Harmsworth, 1st Viscount Northcliffe, in 1896.[4] It was incorporated in 1922 and its shares were first listed on the London Stock Exchange in 1932. Harmsworth, who had been elevated to the peerage as Lord Rothermere, was editorially sympathetic to Oswald Mosley[4] and the British Union of Fascists and he wrote an article, "Hurrah for the Blackshirts", in January 1934.[5] Referring to Adolf Hitler's proposed invasion of Czechoslovakia, Rothermere, again writing in the Daily Mail, said in 1938 that "Czechs were of no concern to Englishmen".[6]

Risk Management Solutions (RMS) is a market leader in catastrophe risk modelling, and is a subsidiary of the DMGT group.[7] It primarily targets the global property and casualty reinsurance industry, producing risk analysis models, services, expertise and data solutions for use in the quantification and management of catastrophic risks.

dmg events was founded in 1989 and now generates growth from almost half a million visitors per year and over 13000 exhibitors from more than 60 countries. Headquartered in Dubai, it is currently active in North America, the Middle East, North Africa, Europe, Asia, and Australia, employing over 370 staff. Events ran by dmg events include ADIPEC, The Global Petroleum Show, Gastech, The Big 5, Index and The Hotel Show.

Euromoney Institutional Investor plc is the market leader on international financial publishing and event organisation. It's one of Europe's largest business and financial magazine publishers. The company, 68% owned by DMGT, was founded in 1969. The company owns close to 100 international specialist magazines in finance, energy, aviation, pharmaceuticals and law. Euromoney trains international bankers and securities specialists around the world, runs international conferences, and is very strong in electronic publishing. With offices worldwide, its shares are listed in London and Luxembourg. Euromoney has invested in businesses such as MetalBulletin, BCA Research and Ned Davis Research Group.

dmg media is the media subsidiary of DMGT and publishes the following titles:

The London Evening Standard, in modern times the dominant paid-for London-area local newspaper[citation needed], was owned by DMGT until it was sold to Alexander Lebedev in January 2009. Since then it has been made free as of October 2009. DMGT still maintains a 25% share [12]

A team at Surrey Quays used to co-ordinate the daily printing requirement for newspapers. Printing now occurs at contract sites in Didcot and Thurrock.

DMGT holds stakes in a number of businesses, some as minority investments as well as joint ventures and associates. Its largest interest is Zoopla Property Group (UK Property Search Engines Zoopla and PrimeLocation). 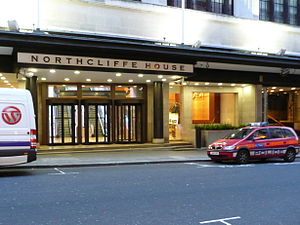 The head office is located in Northcliffe House in Kensington, London Borough of Kensington and Chelsea.[15][16] In addition to housing the DMGT head office, the building also houses the offices of The Independent series, Daily Mail, Mail on Sunday, Evening Standard, and Metro.[16]