From Infogalactic: the planetary knowledge core
(Redirected from Dartsedo)
Jump to: navigation, search
This article is about the city of Kangding. For the town synonymous known as Kangding, see Lucheng, Kangding.

Kangding (Chinese and English) or Dardo (Tibetan), is a city and the location of the seat of Garzê Tibetan Autonomous Prefecture in western Sichuan province of Southwest China. Kangding's urban center has around 100,000 inhabitants.

Kangding had been historical border between Tibet and China, from Kangding to the west lies Tibetan civilization where as to the east Chinese cultural centre. Kangding has witnessed many conflicts between Tibetan Empire and Chinese dynasties. Kangding was for many centuries an important trading city where Chinese brick tea was carried by porters from Chengdu and other centres to trade for Tibetan wool.[1] A dispute involving the sovereignty over the city between Tibet and the Qing was resolved when the Manchu forces took the city by storm in the Battle of Dartsedo in 1701.

"Tachienlu is surely sui generis; there can be no other town quite like it. Situated eight thousand four hundred feet above the sea, it seems to lie at the bottom of a well, the surrounding snow-capped mountains towering perhaps fifteen thousand feet in the air above the little town which, small as it is, has hardly room to stand, while outside the wall there is scarcely a foot of level ground. It is wedged into the angle where three valleys come together, the Tar and the Chen rivers meeting just below the town to form the Tarchendo, and our first view of the place as we turned the cliff corner that here bars the gorge, was very striking, grey walls and curly roofs standing out sharply from the flanking hillsides."[3]

During time of the Republic of China administration, Kangding was the capital of the now-defunct province of Xikang.

Kangding is divided into 3 towns and 18 townships:

Kangding is located in a valley of the Tibetan Plateau about 210 kilometres (130 mi) west-southwest of Chengdu, the provincial capital, and 100 kilometres (62 mi) west of Ya'an. It is a city populated by significant proportions of both Tibetans and Han, and is part of the historical Tibetan region of Kham. A raging river splits the city, thus the constant sound of water reverberates throughout much of the city. The city features a sizable square where young and old alike gather in the early hours of the morning to do Tai Chi, play badminton, or socialise. This square comes alive on the weekends as well, when families tend to fill it. Traditional Tibetan and Sichuanese restaurants are easily found throughout the city. A Tibetan Buddhist monastery sits on the mountains overlooking the city, and is accessible by cable car. As of October 2006, a stone amphitheatre is under construction at the upper monastery.

It is a fast-growing city, with a rapidly developing tourist infrastructure, including a scenic cable car imported from Germany.

Kangding contains some notable Buddhist monasteries, including Nanwu Si Monastery, Anque Monastery and Jinggang Monastery. It was from 1857 the siege of Roman Catholic Diocese of Kangding, administered by Paris Foreign Missions Society. The Catholic church was destroyed during the Cultural Revolution.

Kangding has a monsoon-influenced climate, lying in the transition between a humid continental (Dwb) and a subtropical highland climate (Cwb) on the Köppen system. Despite the elevation of 2,560 metres (8,400 ft), the diurnal temperature variation averages at most 10.5 °C (18.9 °F) in any month. From April to September, rain is a very common occurrence, with around two-thirds of the days receiving some rainfall; in addition, 77% of the annual precipitation is delivered from May to September. Monthly daily average temperatures range from −2.2 °C (28.0 °F) in January to 15.5 °C (59.9 °F) in July; the annual mean is 7.09 °C (44.8 °F). Over the course of the year, the frost-free period lasts 177 days and there are 1,738 hours of sunshine. 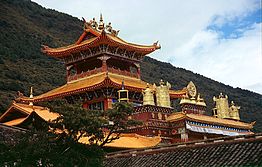