From Infogalactic: the planetary knowledge core
Jump to: navigation, search
For the Royal Society award, see Darwin Medal. For the 2006 film, see The Darwin Awards (film).

The Darwin Awards are a tongue-in-cheek honor, originating in Usenet newsgroup discussions circa 1985. They recognize individuals who have supposedly contributed to human evolution by selecting themselves out of the gene pool via death or sterilization by their own actions.

The project became more formalized with the creation of a website in 1993, and followed up by a series of books starting in 2000, authored by Wendy Northcutt. The criterion for the awards states, "In the spirit of Charles Darwin, the Darwin Awards commemorate individuals who protect our gene pool by making the ultimate sacrifice of their own lives. Darwin Award winners eliminate themselves in an extraordinarily idiotic manner, thereby improving our species' chances of long-term survival."[2]

Accidental self-sterilization also qualifies; however, the site notes: "Of necessity, the award is usually bestowed posthumously." But the candidate is disqualified if "innocent bystanders", who might have contributed positively to the gene pool, are killed in the process.

The Darwin Awards books state that an attempt is made to disallow known urban legends from the awards, but some older "winners" have been "grandfathered" to keep their awards. The Darwin Awards site does try to verify all submitted stories, but many similar sites, and the vast number of circulating "Darwin awards" emails, are largely fictional. 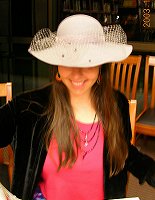 Wendy Northcutt, author of the Darwin Awards website and books

The origin of the Darwin Awards can be traced back to posts on Usenet group discussions as early as 1985. This early post, on August 7, 1985, describes the awards as being, "given posthumously to people who have made the supreme sacrifice to keep their genes out of our pool. Style counts, not everyone who dies from their own stupidity can win."[3] This early post cites an example of a person who pulled a vending machine over their head and was crushed to death trying to break into it.[3] Another widely distributed early story mentioning the Darwin Awards is the JATO Rocket Car, which describes a man who strapped a JATO (Jet-Assisted Take-Off) unit to his Chevrolet Impala in the Arizona desert and who died gloriously on the side of a cliff as his car achieved speeds of 250 to 300 miles per hour.[4] This story was later confirmed to be an urban legend by the Arizona Department of Public Safety.[5] The official Darwin Awards website run by Northcutt does its best to confirm all stories submitted, listing them as, "confirmed true by Darwin." Many of the viral emails circulating the Internet, however, are hoaxes and urban legends.[6]

The website and collection of books were started in 1993 by Wendy Northcutt, who at the time was a graduate in molecular biology from the University of California, Berkeley.[7] She went on to study neurobiology at Stanford University, doing research on cancer and telomerase. In her spare time, she organized chain letters from family members into the original Darwin Awards website hosted in her personal account space at Stanford. She eventually left the bench in 1998 and devoted herself full-time to her website and books in September 1999.[8] By 2002, the website received 7 million page hits per month.[9]

She encountered some difficulty in publishing the first book, since most publishers would only offer her a deal if she agreed to remove the stories from the Internet. Northcutt refused to do so, saying, “It was a community! I could not do that. Even though it might have cost me a lot of money, I kept saying no.” She eventually found a publisher who agreed to print the book containing only 10% of the material. The first book turned out to be a success, and was listed on the New York Times bestseller list for six months.[10]

Not all of the feedback from the stories Northcutt published was positive, and she would occasionally receive email from people who knew the deceased. One such person wrote, "This is horrible. It has shocked our community to the core. You should remove this." Nevertheless, Northcutt would keep the stories on the website and in her books, citing them as a "funny-but-true safety guide", and mentioning that children who read the book are going to be a lot more careful around explosives.[11]

The website also recognizes, with Honorable Mentions, individuals who survive their misadventures with their reproductive capacity intact. One example of this is Lawnchair Larry, who attached helium filled weather balloons to a lawn chair and floated far above Long Beach, California, in July 1982. He reached an altitude of 16,000 feet (4,900 m) but survived, to be later fined for crossing controlled airspace.[12] Another notable honorable mention was given to the two men who attempted to burgle the home of footballer Duncan Ferguson (who had four convictions for assault and had served six months in Glasgow's Barlinnie prison) in 2001, with one burglar requiring three days' hospitalization after being confronted by the player.[13]

Northcutt has stated five requirements for a Darwin Award:[2][15]

Sometimes this can be a matter of dispute. Potential awardees may be out of the gene pool because of age; others have already reproduced before their deaths. To avoid debates about the possibility of in-vitro fertilization, artificial insemination, or cloning, the original Darwin Awards book applied the following "deserted island" test to potential winners: If the person were unable to reproduce when stranded on a deserted island with a fertile member of the opposite sex, he or she would be considered sterile.[16] Winners of the award, in general, either are dead or have become unable to use their sexual organs.

The candidate's foolishness must be unique and sensational, likely because the award is intended to be funny. A number of foolish but common activities, such as smoking in bed, are excluded from consideration. In contrast, self-immolation caused by smoking after being administered a flammable ointment in a hospital and specifically told not to smoke is grounds for nomination.[17] One 'Honorable Mention' (a man who attempted suicide by swallowing nitroglycerine pills, and then tried to detonate them by running into a wall) is noted to be in this category, despite being intentional and self-inflicted, which would normally disqualify the inductee.[18]

Killing a friend with a hand grenade would not be eligible, but killing oneself while manufacturing a homemade chimney-cleaning device from a grenade would be eligible.[19] To earn a Darwin Award, one must have killed oneself; merely causing death to a third party is insufficient.

The nominee must be at least past the legal driving age and free of mental defect (Northcutt considers injury or death caused by mental defect to be tragic, rather than amusing, and routinely disqualifies such entries). After much discussion, there also exists a small category regarding deaths below this age limit. Entry into this category requires that the peers of the candidate be of the opinion that the actions of the person in question were above and beyond the limits of reason.

However, in 2011 the awards targeted a 16-year-old boy in Leeds who died stealing copper wiring (the standard minimum driving age in Great Britain being 17). In 2012, Northcutt made similar light of a 14-year-old girl in Brazil who was killed while leaning out of a school bus window, however "disqualified" the award itself because the likely public objection due to her age, which she asserts is based on "magical thinking."[20]

The story must be documented by reliable sources: e.g., reputable newspaper articles, confirmed television reports, or responsible eyewitnesses. If a story is found to be untrue, it is disqualified, but particularly amusing ones are placed in the urban legend section of the archives. Despite this requirement, many of the stories are fictional, often appearing as "original submissions" and presenting no further sources than unverified (and unreliable) "eyewitnesses." Most such stories on Northcutt's Darwin Awards site are filed in the Personal Accounts section.

In addition, later revisions to the qualification criteria add several requirements that have not been made into formalized 'rules': innocent bystanders cannot be in danger, and the qualifying event must be caused without deliberate intent (to prevent glory-seekers from purposely injuring themselves solely to win a Darwin).

Relationship to the theory of natural selection

The Darwin Awards are named after Charles Darwin because of his theory of natural selection. However, there is no evidence that the stories depicted actually represent the removal of "judgement impairment genes" from the gene pool. While the stories depict a lack of intelligence in many of the individuals, no genetic differences between Darwin Award winners and the rest of humankind have been sought or demonstrated. Fatal stupidity could be culturally acquired during upbringing and socialization. The stories may actually represent excessive impulsiveness, which can result from a variety of factors.[7]