From Infogalactic: the planetary knowledge core
Jump to: navigation, search
For other uses, see Dauphin (disambiguation). 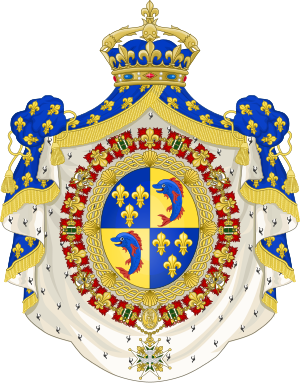 Coat of arms of the Dauphin of France. 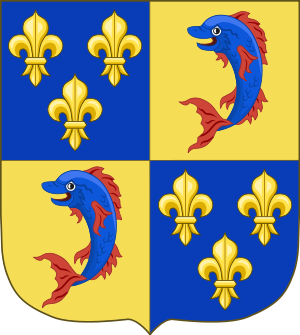 Arms of the Dauphin of France, depicting the fleur-de-lis and the dolphin.

The Dauphin of France (pronunciation: /ˈdɔːfᵻn/, also UK /ˈdoʊfæn/ and US /doʊˈfæn/; French: Dauphin de France, IPA: [dofɛ̃])—strictly The Dauphin of Viennois (Dauphin de Viennois)—was the title given to the heir apparent to the throne of France from 1350 to 1791 and 1824 to 1830. The word is French for dolphin, as a reference to the depiction of the animal on their coat of arms.

Guigues IV, Count of Vienne, had a dolphin on his coat of arms and was nicknamed le Dauphin. The title of Dauphin de Viennois descended in his family until 1349, when Humbert II sold his seigneury, called the Dauphiné, to King Philippe VI on condition that the heir of France assume the title of le Dauphin. The wife of the Dauphin was known as la Dauphine.

The first French prince called le Dauphin was Charles the Wise, later to become Charles V of France. The title was roughly equivalent to the English (thence British) Prince of Wales, the Scottish Duke of Rothesay, the Portuguese Prince of Brazil, and the Spanish Prince of Asturias. The official style of a Dauphin of France, prior to 1461, was par la grâce de Dieu, dauphin de Viennois, comte de Valentinois et de Diois ("By the Grace of God, Dauphin of Viennois, Count of Valentinois and of Diois"). A Dauphin of France united the coat of arms of the Dauphiné, which featured Dolphins, with the French fleurs-de-lys, and might, where appropriate, further unite that with other arms (e.g. Francis, son of Francis I, was ruling Duke of Brittany, so united the arms of that province with the typical arms of a Dauphin; Francis II, while Dauphin, was also King of Scots by marriage to Mary I, and added the arms of the Kingdom of Scotland to those of the Dauphin).

Originally, the Dauphin was personally responsible for the rule of the Dauphiné, which was legally part of the Holy Roman Empire, and which the Emperors, in giving the rule of the province to the French heirs, had stipulated must never be united with France. Because of this, the Dauphiné suffered from anarchy in the 14th and 15th centuries, since the Dauphins were frequently minors or concerned with other matters.

During his period as Dauphin, Louis, son of Charles VII, defied his father by remaining in the province longer than the King permitted and by engaging in personal politics more beneficial to the Dauphiné than to France. For example, he married Charlotte of Savoy against his father's wishes. Savoy was a traditional ally of the Dauphiné, and Louis wished to reaffirm that alliance to stamp out rebels and robbers in the province. Louis was driven out of the Dauphiné by Charles VII's soldiers in 1456, leaving the region to fall back into disorder. After his succession as Louis XI of France in 1461, Louis united the Dauphiné with France, bringing it under royal control.

The title was automatically conferred upon the next heir apparent to the throne in the direct line upon birth, accession of the parent to the throne or death of the previous Dauphin, unlike the British title Prince of Wales, which has always been in the gift of the monarch.

The title was abolished by the Constitution of 1791, which made France a constitutional monarchy. Under the constitution the heir to the throne (Dauphin Louis-Charles at that time) was restyled Prince Royal (a Prince of the Blood retitled prince français), taking effect from the inception of the Legislative Assembly on 1 October 1791. The title was restored in potentia under the Bourbon Restoration of Louis XVIII, but there would not be another Dauphin until after his death. With the accession of his brother Charles X, Charles' son and heir Louis-Antoine, Duke of Angoulême automatically became Dauphin.

With the removal of the Bourbons the title fell into disuse, the heirs of Louis-Philippe being titled Prince Royal. After the death of Henri, comte de Chambord, Carlos, Duke of Madrid, the heir of the legitimist claimant, Juan, Count of Montizón, made use of the title in pretense, as have the Spanish legitimist claimants since.

See also: List of Counts of Albon and Dauphins of Viennois 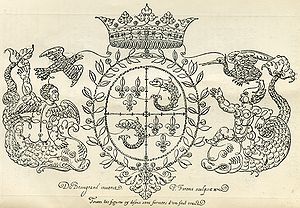 A lineographic representation of the arms of the Dauphin. Designed by Jean de Beaugrand in 1604.

In Mark Twain's Adventures of Huckleberry Finn, Huck encounters two odd characters who turn out to be professional con men. One of them claims that he should be treated with deference, since he is "really" an impoverished English duke, and the other, not to be outdone, reveals that he is "really" the Dauphin ("Looy the Seventeen, son of Looy the Sixteen and Marie Antoinette").

In Baronness Emma Orczy's Eldorado, the Scarlet Pimpernel rescues the Dauphin from prison and helps spirit him from France.

Alphonse Daudet wrote a short story called "The Death of the Dauphin", about a young Dauphin who wants to stop Death from approaching him.

It is also mentioned in Cormac McCarthy's Blood Meridian.