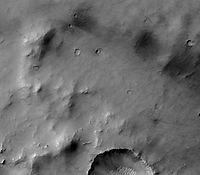 Dawes Crater is located in the Sinus Sabaeus quadrangle of Mars, at Lua error in Module:Coordinates at line 668: callParserFunction: function "#coordinates" was not found.. It is about 191 km (119 mi) in diameter, and was named after William R. Dawes, a British astronomer (1799–1868)[2] who was ahead of his time in believing that Mars only had a thin atmosphere. Dawes presumed that the atmosphere of Mars was thin because surface markings on the planet could easily be seen.[3]

Impact craters generally have a rim with ejecta around them, in contrast volcanic craters usually do not have a rim or ejecta deposits. As craters get larger (greater than 10 km in diameter) they usually have a central peak.[4] The peak is caused by a rebound of the crater floor following the impact.[5] Sometimes craters expose layers that were buried. Rocks from deep underground are tossed onto the surface. Hence, craters can show us what lies deep under the surface.

The density of impact craters is used to determine the surface ages of Mars and other solar system bodies.[4] The older the surface, the more craters present. Crater shapes can reveal the presence of ground ice.

The area around craters may be rich in minerals. On Mars, heat from the impact melts ice in the ground. Water from the melting ice dissolves minerals, and then deposits them in cracks or faults that were produced with the impact. This process, called hydrothermal alteration, is a major way in which ore deposits are produced. The area around Martian craters may be rich in useful ores for the future colonization of Mars.[6] Studies on the earth have documented that cracks are produced and that secondary minerals veins are deposited in the cracks.[7][8][9] Images from satellites orbiting Mars have detected cracks near impact craters.[10] Great amounts of heat are produced during impacts. The area around a large impact may take hundreds of thousands of years to cool.[11][12][13]