From Infogalactic: the planetary knowledge core
Jump to: navigation, search
For the Saint Seiya character, see Cancer Deathmask. For the episode of the television series Rome, see Death Mask (Rome). For the video game titled "DeathMask", see Angel Devoid: Face of the Enemy. 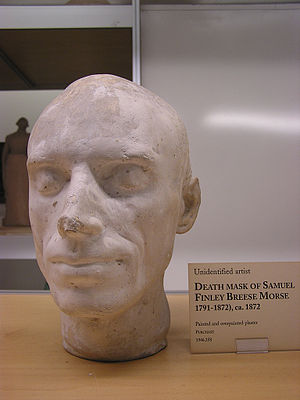 A death mask is a wax or plaster cast made of a person’s face following death. Death masks may be mementos of the dead, or be used for creation of portraits. It is sometimes possible to identify portraits that have been painted from death masks, because of the characteristic slight distortions of the features caused by the weight of the plaster during the making of the mold. In other cultures a death mask may be a clay or another artifact placed on the face of the deceased before burial rites. The best known of these are the masks used by ancient Egyptians as part of the mummification process, such as Tutankhamun's mask.

In the 10th century in some European countries, it was common for death masks to be used as part of the effigy of the deceased, displayed at state funerals. During the 18th and 19th centuries they were also used to permanently record the features of unknown corpses for purposes of identification. This function was later replaced by photography.

In the cases of people whose faces were damaged by their death, it was common to take casts of their hands. An example of this occurred in the case of Thomas D'Arcy McGee, the Canadian statesman whose face was shattered by the bullet which assassinated him in 1868.

When taken from a living subject, such a cast is called a life mask. Proponents of phrenology used both death masks and life masks for pseudoscientific purposes. 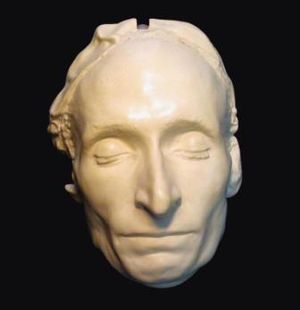 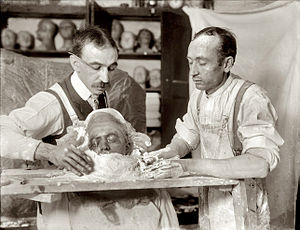 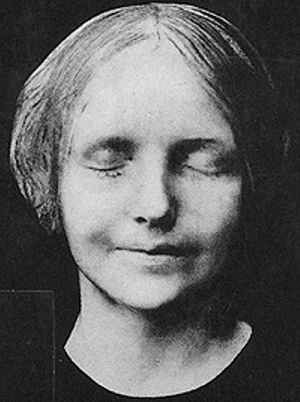 Masks of deceased persons are part of traditions in many countries. The most important process of the funeral ceremony in ancient Egypt was the mummification of the body, which, after prayers and consecration, was put into a sarcophagus enameled and decorated with gold and gems. A special element of the rite was a sculpted mask, put on the face of the deceased. This mask was believed to strengthen the spirit of the mummy and guard the soul from evil spirits on its way to the afterworld. The best known mask is Tutankhamun's mask. Made of gold and gems, the mask conveys the highly stylized features of the ancient ruler. Such masks were not, however, made from casts of the features; rather, the mummification process itself preserved the features of the deceased.

In 1876 the archaeologist Heinrich Schliemann discovered in Mycenae six graves, which he was confident belonged to kings and ancient Greek heroes—Agamemnon, Cassandra, Evrimdon and their associates. To his surprise, the skulls were covered with gold masks. It is now thought by some unlikely that the masks actually belonged to Agamemnon and other heroes of the Homeric epics.

The lifelike character of Roman portrait sculptures has been attributed to the earlier Roman use of wax to preserve the features of deceased family members (the so-called imagines maiorum). The wax masks were subsequently reproduced in more durable stone.[1]

The use of masks in the ancestor cult is also attested in Etruria. Excavations of tombs in the area of the ancient city of Clusium (modern Chiusi, Tuscany) have yielded a number of sheet bronze masks dating from the Etruscan Late Orientalising period.[2] In the 19th century it was thought that they were related to the Mycenaean examples, but whether they served as actual death masks cannot be proven. The most credited hypothesis holds that they were originally fixed to cinerary urns, to give them a human appearance. In Orientalising Clusium, the anthropomorphization of urns was a prevalent phenonmenon that was strongly rooted in local religious beliefs.

In the late Middle Ages, a shift took place from sculpted masks to true death masks, made of wax or plaster. These masks were not interred with the deceased. Instead, they were used in funeral ceremonies and were later kept in libraries, museums, and universities. Death masks were taken not only of deceased royalty and nobility (Henry VIII, Sforza), but also of eminent persons—composers, dramaturges, military and political leaders, philosophers, poets, and scientists, such as Dante Alighieri, Ludwig van Beethoven, Napoleon Bonaparte (whose death mask was taken on the island of Saint Helena and is displayed at London’s British Museum), Filippo Brunelleschi, Frédéric Chopin, Oliver Cromwell (whose death mask is preserved at Warwick Castle), Joseph Haydn, John Keats, Franz Liszt, Blaise Pascal, Nikola Tesla (commissioned by his friend Hugo Gernsback and now displayed in the Nikola Tesla Museum), Torquato Tasso, and Voltaire. As in ancient Rome, death masks were often subsequently used in making marble sculpture portraits, busts, or engravings of the deceased.[citation needed]

In Russia, the death mask tradition dates back to the times of Peter the Great, whose death mask was taken by Carlo Bartolomeo Rastrelli. Also well known are the death masks of Nicholas I, and Alexander I.

One of the first real Ukrainian death masks was that of the poet Taras Shevchenko, taken by Peter Clodt von Jürgensburg in St. Petersburg, Russia.[3]...

In early spring of 1860 and shortly before his death in April 1865, two life masks were created of President Abraham Lincoln.[4]

Death masks were increasingly used by scientists from the late 18th century onwards to record variations in human physiognomy. The life mask was also increasingly common at this time, taken from living persons. Anthropologists used such masks to study physiognomic features in famous people and notorious criminals. Masks were also used to collect data on racial differences.

Before the widespread availability of photography, the facial features of unidentified bodies were sometimes preserved by creating death masks so that relatives of the deceased could recognize them if they were seeking a missing person.

One mask, known as L'Inconnue de la Seine, recorded the face of an unidentified young woman who, around the age of sixteen, according to one man's story, had been found drowned in the Seine River at Paris, France around the late 1880s. A morgue worker made a cast of her face, saying "Her beauty was breathtaking, and showed few signs of distress at the time of passing. So bewitching that I knew beauty as such must be preserved." The cast was also compared to Mona Lisa, and other famous paintings and sculptures. In the following years, copies of the mask became a fashionable fixture in Parisian Bohemian society.

The face of Resusci Anne, the world’s first CPR training mannequin, introduced in 1960, was modeled after L'Inconnue de la Seine.[5][6]