The death poem is a genre of poetry that developed in the literary traditions of East Asian cultures—most prominently in Japan as well as certain periods of Chinese history and Joseon Korea. They tend to offer a reflection on death—both in general and concerning the imminent death of the author—that is often coupled with a meaningful observation on life. The practice of writing a death poem has its origins in the Zen Buddhism. It is a concept or worldview derived from the Buddhist teaching of the three marks of existence (三法印, sanbōin?), specifically that the material world is transient and impermanent (無常, mujō?), that attachment to it causes suffering (苦, ku?), and ultimately all reality is an emptiness or absence of self-nature (空, kū?). These poems became associated with the literate, spiritual, and ruling segments of society, as they were customarily composed by a poet, warrior, nobleman, or Buddhist monk.

The writing of a poem at the time of one's death and reflecting on the nature of death in an impermanent, transitory world is unique to East Asian culture. It has close ties with Buddhism, and particularly the mystical Zen Buddhism (of Japan) or the Chen Buddhism (of China and Korea). From its inception, Buddhism has stressed the importance of death because awareness of death is what prompted the Buddha to perceive the ultimate futility of worldly concerns and pleasures. A death poem exemplifies both the "eternal loneliness" that is found at the heart of Zen and the search for a new viewpoint, a new way of looking at life and things generally, or a version of enlightenment (satori in Japanese; wu in Chinese). According to comparative religion scholar Julia Ching, Japanese Buddhism "is so closely associated with the memory of the dead and the ancestral cult that the family shrines dedicated to the ancestors, and still occupying a place of honor in homes, are popularly called the Butsudan, literally 'the Buddhist altars'. It has been the custom in modern Japan to have Shinto weddings, but to turn to Buddhism in times of bereavement and for funeral services".[1]

The writing of a death poem was limited to the society's literate class, ruling class, samurai, and monks. It was introduced to Western audiences during World War II when Japanese soldiers, emboldened by their culture's samurai legacy, would write poems before suicidal missions or battles.[2] 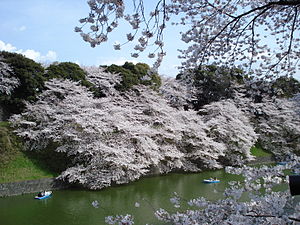 The poem's structure can be in one of many forms, including the two traditional forms in Japanese literature: kanshi or waka.[lower-alpha 1]. Sometimes they are written in the three-line, seventeen-syllable haiku form, although the most common type of death poem (called a jisei 辞世) is in the waka form called the tanka (also called a jisei-ei 辞世詠) which consists of five lines totaling 31 syllables (5-7-5-7-7)—a form that constitutes over half of surviving death poems.(Ogiu, 317-318).

Poetry has long been a core part of Japanese tradition. Death poems are typically graceful, natural, and emotionally neutral, in accordance with the teachings of Buddhism and Shinto. Excepting the earliest works of this tradition, it has been considered inappropriate to mention death explicitly; rather, metaphorical references such as sunsets, autumn or falling cherry blossom suggest the transience of life.

It was an ancient custom in Japan for literate persons to compose a jisei on their deathbed. One of earliest records was recited by Prince Ōtsu executed in 686. For examples of death poems, see the articles on the famous haiku poet Bashō, the Japanese Buddhist monk Ryōkan, Ōta Dōkan (builder of Edo Castle), the monk Gesshū Sōko, and the Japanese woodblock master Tsukioka Yoshitoshi. The custom has continued into modern Japan. Some people left their death poems in multiple forms. Prince Ōtsu made both waka and kanshi, Sen no Rikyū made both kanshi and kyōka.

On March 17, 1945, General Tadamichi Kuribayashi, the Japanese commander-in chief during the Battle of Iwo Jima, sent a final letter to Imperial Headquarters. In the message, General Kuribayashi had apologized for failing to successfully defend Iwo Jima against the overwhelming forces of the United States Military. At the same time, however, he had expressed great pride in the heroism of his men, who, starving and thirsty, had been reduced to fighting with rifle butts and fists. He closed the message with three traditional death poems in waka form.

Kuni no tame / omoki tsutome o / hatashi ede / yadama tsukihate / chiruzo kanashiki
Unable to complete this heavy task for our country
Arrows and bullets all spent, so sad we fall.

Ada utade / nobe niwa kuchiji / warewa mata / sichido umarete / hoko o toranzo
But unless I smite the enemy,
My body cannot rot in the field.
Yea, I shall be born again seven times
And grasp the sword in my hand.

Shikokusa no / shima ni habikoru / sono toki no / koukoku no yukute / ichizu ni omou
When ugly weeds cover this island,
My sole thought shall be [the future of] the Imperial Land.[3]

In 1970, writer Yukio Mishima and his disciple Masakatsu Morita, composed death poems before their attempted coup attempt at the Ichigaya garrison in Tokyo, where they committed the ritualistic suicide of Sepukku.[4]

Although he did not compose any formal death poem on his deathbed, the last poem written by the great poet Matsuo Bashō (1644-1694) recorded by his disciple Takarai Kikaku during his final illness is generally accepted as his poem of farewell:

Besides Korean Buddhist monks, Confucian scholars called seonbis sometimes wrote death poems (절명시). However, better-known examples are those written or recited by famous historical figures facing death when they were executed for loyalty to their former king or due to insidious plot. They are therefore impromptu verses, often declaring their loyalty or steadfastness. The following are some examples that are still learned by school children in Korea as models of loyalty. These examples are written in Korean sijo (three lines of 3-4-3-4 or its variation) or in Hanja five-syllable format (5-5-5-5 for a total of 20 syllables) of ancient Chinese poetry (五言詩).

Yi Gae (이개·1417-1456) was one of "six martyred ministers" who were executed for conspiring to assassinate King Sejo, who usurped the throne from his nephew Danjong. Sejo offered to pardon six ministers including Yi Gae and Seong Sam-mun if they would repent their crime and accept his legitimacy, but Yi Gae and all others refused. He recited the following poem in his cell before execution on June 8, 1456. In this sijo, Lord (임) actually should read someone beloved or cherished, meaning King Danjong in this instance.[6]

Oh, candlelight shining the room, with whom did you part?

You shed tears without and burn within, yet no one notices.

We part with our Lord on a long journey and burn like thee.

Like Yi Gae, Seong Sam-mun (성삼문·1418–1456) was one of "six martyred ministers," and was the leader of the conspiracy to assassinate Sejo. Sam-mum refused the offer of pardon and denied Sejo's legitimacy. He recited the following sijo in prison and the second one (five-syllable poem) on his way to the place of execution, where his limbs were tied to oxen and torn apart.[7]

What shall I become when this body is dead and gone?

A tall, thick pine tree on the highest peak of Bongraesan,

As the sound of drum calls for my life,

I turn my head where sun is about to set.

There is no inn on the way to underworld.

At whose house shall I sleep tonight?

Jo Gwang-jo (조광조·1482–1519) was a neo-Confucian reformer who was framed by the conservative faction opposing his reforms in the Third Literati Purge of 1519. His political enemies slandered Jo to be disloyal by writing "Jo will become the king" (주초위왕, 走肖爲王) with honey on leaves so that caterpillars left behind the same phrase as if in supernatural manifestation. King Jungjong ordered his death by sending poison and abandoned Jo's reform measures. Jo, who had believed to the end that Jungjong would see his errors, wrote the following before drinking poison on December 20, 1519.[8] Repetition of similar looking words is used to emphasize strong conviction in this five-syllable poem.

Loved my sovereign as own father

Worried over country as own house

The bright sun looking down upon earth

Shines ever so brightly on my red heart.

Jeong Mong-ju (정몽주·1337–1392), considered "father" of Korean neo-Confucianism, was a high minister of Goryeo dynasty when Yi Seong-gye overthrew Goryeo and established Joseon dynasty. He answered with the following sijo to the future Taejong of Joseon when the latter demanded his support for the new dynasty with a poem of his own. Just as he suspected, he was assassinated the same night on April 4, 1392.

Should this body die and die again a hundred times over,

White bones turning to dust, with or without trace of soul,

My steadfast heart toward Lord, could it ever fade away?