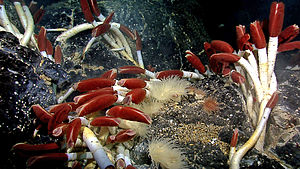 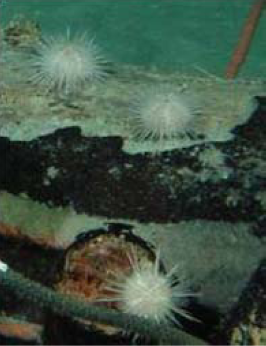 Deep sea communities are groups of organisms associated by a shared habitat in the deep sea. They remain largely unexplored, due to the technological and logistical challenges and expense involved in visiting these remote biomes. Because of the unique challenges (particularly the high barometric pressure, extremes of temperature and absence of light), it was long believed that little life existed in this hostile environment. Since the 19th century however, research has demonstrated that significant biodiversity exists in the deep sea.

The three main sources of energy and nutrients for deep sea communities are marine snow, whale falls, and chemosynthesis at hydrothermal vents and cold seeps.

Prior to the 19th century scientists assumed life was sparse in the deep ocean. In the 1870s Sir Charles Thompson and colleagues aboard the Challenger expedition discovered many deep-sea creatures of widely varying types.

The Challenger Deep is the deepest surveyed point of all of Earth's oceans; it is located at the southern end of the Mariana Trench near the Mariana Islands group. The depression is named after HMS Challenger, whose researchers made the first recordings of its depth on 23 March 1875 at station 225. The reported depth was 4,475 fathoms (8184 meters) based on two separate soundings. In 1960, Don Walsh and Jacques Piccard descended to the bottom of the Challenger Deep in the Trieste bathyscaphe. At this great depth a small flounder-like fish was seen moving away from the spotlight of the bathyscaphe.

The Japanese remote operated vehicle (ROV) Kaiko became the second vessel to reach the bottom of the Challenger Deep in March 1995. Nereus, a hybrid remotely operated vehicle (HROV) of the Woods Hole Oceanographic Institution, is the only vehicle capable of exploring ocean depths beyond 7000 meters. Nereus reached a depth of 10,902 meters at the Challenger Deep on May 31, 2009.[2][3] On 1 June 2009, sonar mapping of the Challenger Deep by the Simrad EM120 multibeam sonar bathymetry system aboard the R/V Kilo Moana indicated a maximum depth of 10,971 meters (6.817 miles). The sonar system uses phase and amplitude bottom detection, with an accuracy of better than 0.2% of water depth (this is an error of about 22 meters at this depth).[3][4]

The ocean can be conceptualized as being divided into various zones, depending on depth, and presence or absence of sunlight. Nearly all life forms in the ocean depend on the photosynthetic activities of phytoplankton and other marine plants to convert carbon dioxide into organic carbon, which is the basic building block of organic matter. Photosynthesis in turn requires energy from sunlight to drive the chemical reactions that produce organic carbon.[5]

The euphotic zone is somewhat arbitrarily defined as extending from the surface to the depth where the light intensity is approximately 0.1–1% of surface sunlight irradiance, depending on season, latitude and degree of water turbidity.[6][7] In the clearest ocean water, the euphotic zone may extend to a depth of about 150 meters,[6] or rarely, up to 200 meters.[8] Dissolved substances and solid particles absorb and scatter light, and in coastal regions the high concentration of these substances causes light to be attenuated rapidly with depth. In such areas the euphotic zone may be only a few tens of meters deep or less.[6][8] The dysphotic zone, where light intensity is considerably less than 1% of surface irradiance, extends from the base of the euphotic zone to about 1000 meters.[9] Extending from the bottom of the photic zone down to the seabed is the aphotic zone, a region of perpetual darkness.[8][9]

Since the average depth of the ocean is about 4300 meters,[10] the photic zone represents only a tiny fraction of the ocean’s total volume. However, due to its capacity for photosynthesis, the photic zone has the greatest biodiversity and biomass of all oceanic zones. Nearly all primary production in the ocean occurs here. Any life forms present in the aphotic zone must either be capable of movement upwards through the water column into the photic zone for feeding, or must rely on material sinking from above,[5] or must find another source of energy and nutrition, such as occurs in chemosynthetic archaea found near hydrothermal vents and cold seeps. 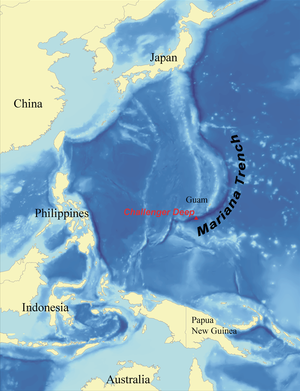 Location of the Challenger Deep in the Mariana Trench

These animals have evolved to survive the extreme pressure of the sub-photic zones. The pressure increases by about one atmosphere every ten meters. To cope with the pressure, many fish are rather small, usually not exceeding 25 cm in length. Also, scientists have discovered that the deeper these creatures live, the more gelatinous their flesh and more minimal their skeletal structure. These creatures have also eliminated all excess cavities that would collapse under the pressure, such as swim bladders.[11]

Pressure is the greatest environmental factor acting on deep-sea organisms. In the deep sea, although most of the deep sea is under pressures between 200 and 600 atm, the range of pressure is from 20 to 1,000 atm. Pressure exhibits a great role in the distribution of deep sea organisms. Until recently, people lacked detailed information on the direct effects of pressure on most deep-sea organisms, because virtually all organisms trawled from the deep sea arrived at the surface dead or dying. With the advent of traps that incorporate a special pressure-maintaining chamber, undamaged larger metazoan animals have been retrieved from the deep sea in good condition. Some of these have been maintained for experimental purposes, and we are obtaining more knowledge of the biological effects of pressure.

The two areas of greatest and most rapid temperature change in the oceans are the transition zone between the surface waters and the deep waters, the thermocline, and the transition between the deep-sea floor and the hot water flows at the hydrothermal vents. Thermoclines vary in thickness from a few hundred meters to nearly a thousand meters. Below the thermocline, the water mass of the deep ocean is cold and far more homogeneous. Thermoclines are strongest in the tropics, where the temperature of the epipelagic zone is usually above 20 °C. From the base of the epipelagic, the temperature drops over several hundred meters to 5 or 6 °C at 1,000 meters. It continues to decrease to the bottom, but the rate is much slower. Below 3,000 to 4,000 m, the water is isothermal. At any given depth, the temperature is practically unvarying over long periods of time. There are no seasonal temperature changes, nor are there any annual changes. No other habitat on earth has such a constant temperature.

Hydrothermal vents are the direct contrast with constant temperature. In these systems, the temperature of the water as it emerges from the "black smoker" chimneys may be as high as 400 °C (it is kept from boiling by the high hydrostatic pressure) while within a few meters it may be back down to 2–4 °C.[12] 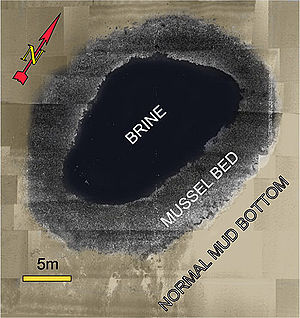 NOAA rendering of a brine pool in the Gulf of Mexico

Salinity is remarkably constant throughout the depths of the deep sea. There are two notable exceptions to this rule:

1. In the Mediterranean Sea, water loss through evaporation greatly exceeds input from precipitation and river runoff. Because of this, salinity in the Mediterranean is higher than in the Atlantic Ocean.[13] Evaporation is especially high in its eastern half, causing the water level to decrease and salinity to increase in this area.[14] The resulting pressure gradient pushes relatively cool, low-salinity water from the Atlantic Ocean across the basin. This water warms and becomes saltier as it travels eastward, then sinks in the region of the Levant and circulates westward, to spill back into the Atlantic over the Strait of Gibraltar.[15] The net effect of this is that at the Strait of Gibraltar, there is an eastward surface current of cold water of lower salinity from the Atlantic, and a simultaneous westward current of warm saline water from the Mediterranean in the deeper zones. Once back in the Atlantic, this chemically distinct Mediterranean Intermediate Water can persist for thousands of kilometers away from its source.[16]

2. Brine pools are large areas of brine on the seabed. These pools are bodies of water that have a salinity that is three to five times greater than that of the surrounding ocean. For deep sea brine pools the source of the salt is the dissolution of large salt deposits through salt tectonics. The brine often contains high concentrations of methane, providing energy to chemosynthetic extremophiles that live in this specialized biome. Brine pools are also known to exist on the Antarctic continental shelf where the source of brine is salt excluded during formation of sea ice. Deep sea and Antarctic brine pools can be toxic to marine animals. Brine pools are sometimes called seafloor lakes because the dense brine creates a halocline which does not easily mix with overlying seawater. The high salinity raises the density of the brine, which creates a distinct surface and shoreline for the pool.[17]

The deep sea, or deep layer, is the lowest layer in the ocean, existing below the thermocline, at a depth of 1000 fathoms (1800 m) or more. The deepest part of the deep sea is Mariana Trench located in the western North Pacific. It is also the deepest point of the earth's crust. It has a maximum depth of about 10.9 km which is deeper than the height of Mount Everest. In 1960, Don Walsh and Jacques Piccard reached the bottom of Mariana Trench in the Trieste bathyscaphe. The pressure is about 11,318 metric tons-force per square meter (110.99 MPa or 16100 psi). 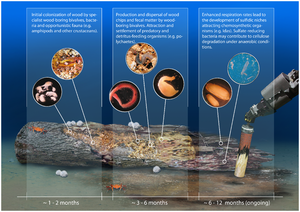 Wood fall as an energy source.

The upper photic zone of the ocean is filled with particle organic matter (POM) and is quite productive, especially in the coastal areas and the upwelling areas. However, most POM is small and light. It may take hundreds, or even thousands of years for these particles to settle through the water column into the deep ocean. This time delay is long enough for the particles to be remineralized and taken up by organisms in the food webs.

Scientists at Woods Hole Oceanographic Institution conducted an experiment three decades ago in deep Sargasso Sea looking at the rate of sinking.[18] They found what became known as marine snow in which the POM are repackaged into much larger particles which sink at much greater speed, 'falling like snow'.

Because of the sparsity of food, the organisms living on and in the bottom are generally opportunistic. They have special adaptations for this extreme environment: rapid growth, effect larval dispersal mechanism and the ability to use a ‘transient’ food resource. One typical example is wood-boring bivalves, which bore into wood and other plant remains and are fed on the organic matter from the remains.

For the deep-sea ecosystem, the death of a whale is the most important event. A dead whale can bring hundreds of tons of organic matter to the bottom. Whale fall community progresses through three stages:[19] 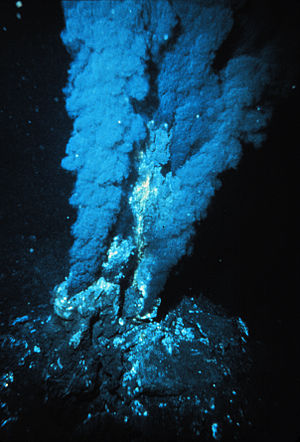 New ocean basin material is being made in regions such as the Mid-Atlantic ridge as tectonic plates pull away from each other. The rate of spreading of plates is 1–5 cm/yr. Cold sea water circulates down through cracks between two plates and heats up as it passes through hot rock. Minerals and sulfides are dissolved into the water during the interaction with rock. Eventually, the hot solutions emanate from an active sub-seafloor rift, creating a hydrothermal vent.

Chemosynthesis of bacteria provide the energy and organic matter for the whole food web in vent ecosystems. Giant tube worms can grow to 2.4 m (7 ft 10 in) tall because of the richness of nutrients. Over 300 new species have been discovered at hydrothermal vents.[21]

Hydrothermal vents are entire ecosystems independent from sunlight, and may be the first evidence that the earth can support life without the sun.

A cold seep (sometimes called a cold vent) is an area of the ocean floor where hydrogen sulfide, methane and other hydrocarbon-rich fluid seepage occurs, often in the form of a brine pool.